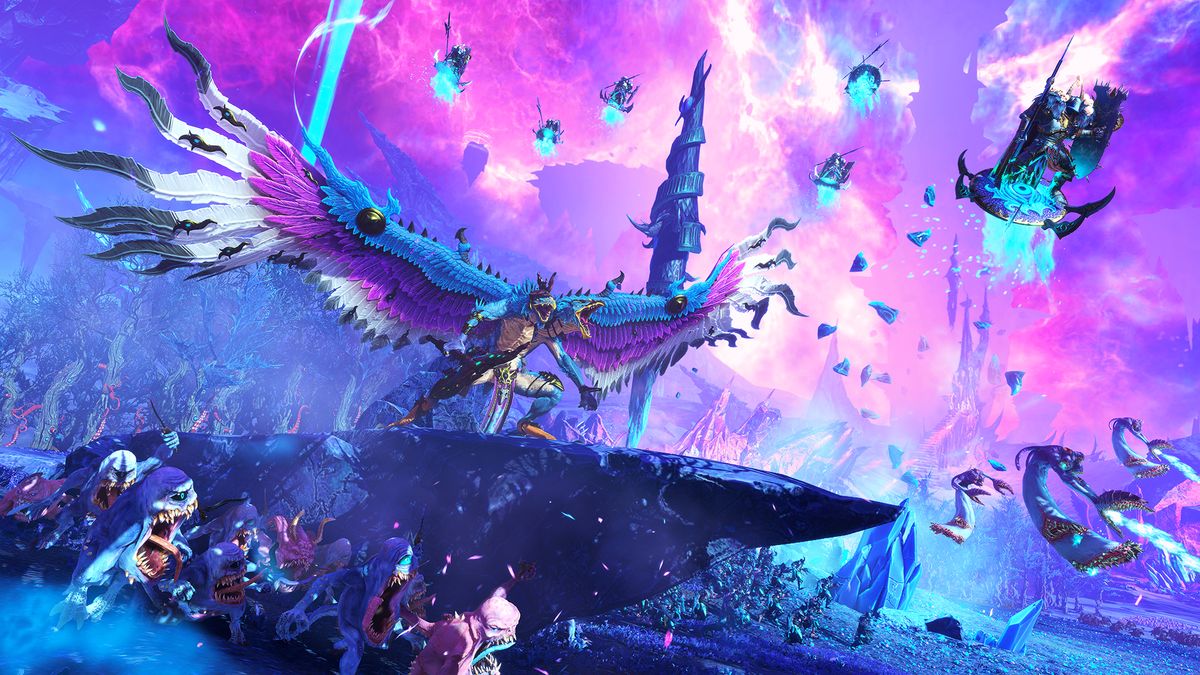 Tzeentch is the last of the Chaos factions to be revealed for the upcoming Total War Warhammer III which has frustratingly been delayed until 2022. Despite the delay, the guys at Creative Assembly are doing a job at keeping the hype train rolling by dropping regular doses of information.

Tzeentch, The Raven God, is the Chaos God of magic, mischief and manipulation. He is flux personified, a daemon-god who alone truly embodies the endless, broiling change that is Chaos. In short, Tzeentch is quite possibly the most subtle of the Chaos gods and this brings some interesting units and abilities to both the battlefield and campaign map.

Check out the Tzeentch reveal trailer below:

First, let us meet the Legendary Lord who’ll be leading the forces of Tzeentch. Kairos Fateweaver is the mightiest of the Lords of Change to serve Tzeentch. Blessed with visions of the past and future, he is a nigh-unrivalled sorcerer and knows every action before it has been conceived, allowing him to twist destiny to suit his own malevolent purposes.

As one of the most powerful spellcasters to wreak havoc upon the blood-soaked battlefields of Total War Warhammer III this twin-headed terror has an armada of magical abilities to unleash upon the enemy. His ability of choice, Staff of Tomorrow, dramatically increases the rate at which he can cast magic. allowing him to effortlessly channel a terrifying mix of the most devastating spells in existence, including those from the new Lore of Tzeentch.

The Tzeentch playstyle will rely heavily on magic use and taking enemies out from range. To support the spellcasters armies will include agile, demonic flying units which can distract and disrupt their enemies. The core of his roster is constructed around ghastly daemons such as the giggling Pink and Blue Horrors and the abominable Flamers of Tzeentch who fling hell-fire at the enemy with reckless abandon, whilst flying units such as Doom Knights, Burning Chariots and Screamers of Tzeentch tear the skies asunder before cascading down upon enemy ranks.

To get the full rundown on what to expect from the forces of Tzeentch visit the official blog page.