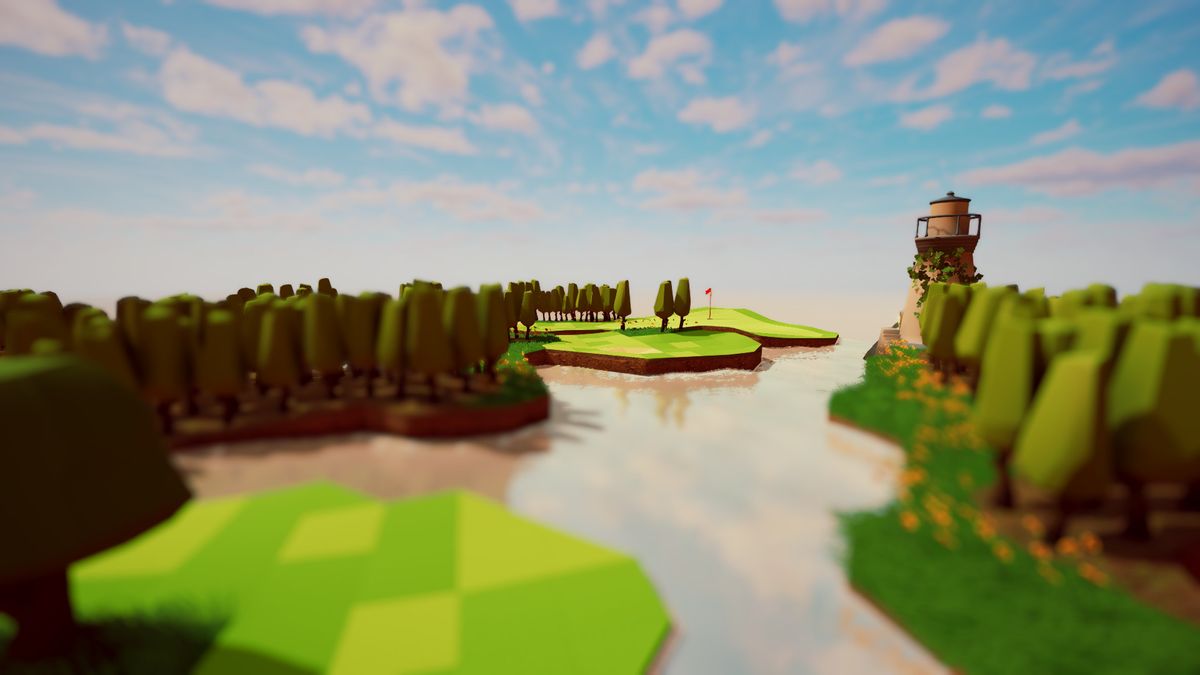 A Little Golf Journey is the latest title from indie studio Okidokico. The game was originally designed to be an enhanced port of their popular mobile game OK Golf. During development the developers decided to expand on their original vision. For this preview I’ve been checking out the early portion of the game on PC.

As you probably guessed from the name, the game is part golf, part adventure. Your task is to take on increasingly complex golf courses as you progress through the world. The world is divided up into different islands and each features a variety of challenges. As you beat a challenge the world is coloured in and you can move on to the next.

The challenges are set on little dioramas with each world having its own theme.
The main aim of challenges is simply to get your golf ball in the hole. The less shots you take, the more stars you are awarded. However, you don’t need to be good at golf or even a fan to enjoy the game. The developers have really stripped back the sport to the basics.

The controls are simple to learn and you don’t need to worry about things like which golf club to use. Before taking a shot it’s possible to move around the course. Taking a shot involves clicking and holding on your golf ball and then dragging your mouse down. The more you drag down the greater the power of the shot, with all the way down giving a power shot.

The game tries to be as helpful as possible and shows you the trajectory your shot will take. You can also hold the Ctrl key to see your shot from the reverse angle. Power shots are the most unpredictable but these can be made easier by holding the Shift key to hold your breath. Doing so steadies the trajectory for a short time, a bit like sniping in an FPS.

The controls work wonderfully and help make the game a joy to play. There’s always an obvious route to the flag but this is also usually the slowest. There’s a lot of fun to be had working out a better way by trying to take shortcuts. Instead of hammering the ball down the fairway you might instead soar high over a group of trees to land on a tiny island in the middle of a lake. Doing so comes with a little risk as you might miss your target but pulling off a tricky shot is definitely more satisfying.

There’s a predefined path through the world but players who take their time will uncover secret holes and extra challenges. I won’t spoil any of these here but there’s a lot more game to be had if you really look for it.

Graphically the game uses a gorgeous low poly aesthetic. It’s a perfect fit for the game and there’s a lot of variety in the different themes of the worlds. The soundtrack by Haakon Davidsen is also well worth a mention. There’s over an hour of soothing piano and guitar melodies to listen to.

So far I’ve been mighty impressed by A Little Golf Journey. The core gameplay is solid and as a completionist I’m enjoying tracking down every secret. I’ve only played through about a fifth of the game but I’m addicted. It’s one of the most relaxing games I’ve played in ages and well worth picking up when it launches.

A Little Golf Journey is set to launch on 14th October, 2021 for PC/Steam and Nintendo Switch. EF Games will have a full review of the game shortly after launch.