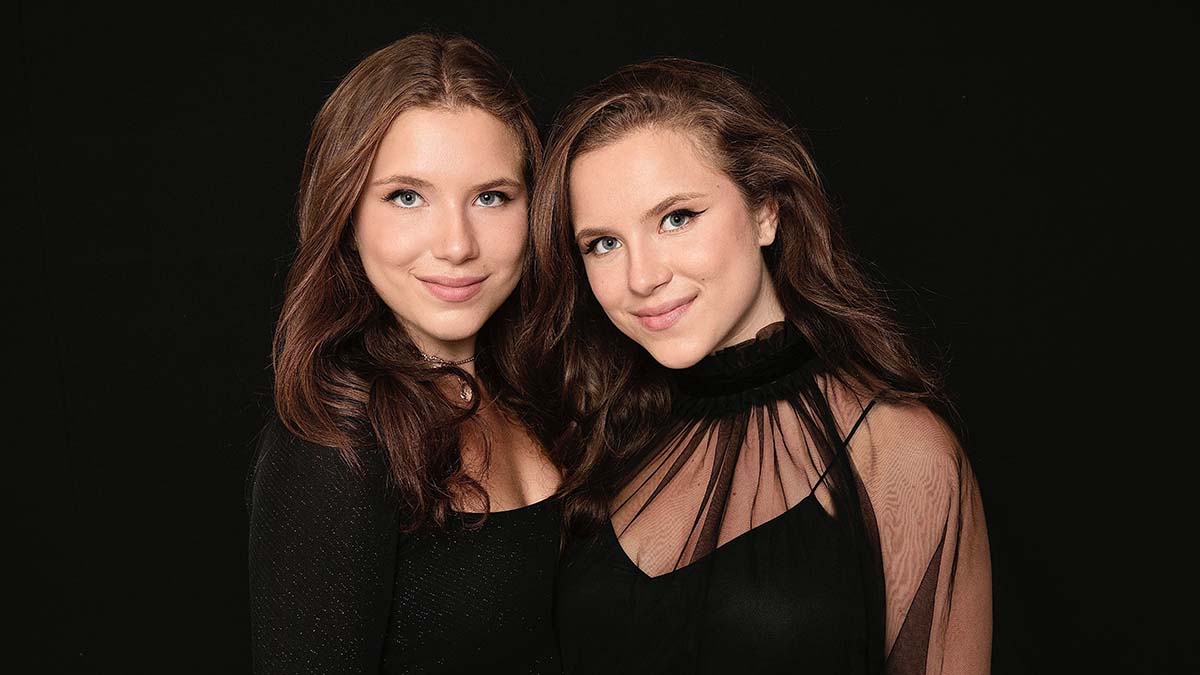 It’s just days to go until ‘Slapface‘ screens at Grimmfest and we’ve been bringing you interviews with the cast and crew, since being wowed by the film at August’s Arrow Video FrightFest.

Completing our ‘Slapface’ interview series, I spoke to twins Bianca and Chiara D’Ambrosio, who play bullies Donna and Rose in the film. We spoke about their experiences on set, the challenges of playing mean girls and their upcoming projects…

In ‘Slapface’ you play Donna and Rose. What do we need to know about those characters?

Chiara: Rose is a mean girl who is best friends with Moriah, played by Mirabelle Lee. She is always out to get Lucas, played by August Maturo, and will never back down from a fight.

Bianca: Donna is a mean girl whose priority is herself and her sister Rose. She is a part of the Nightshades, a trio formed between her, Rose, and their best friend, Moriah. Donna does not hold back and is ruthless to Lucas throughout the film. It was so different playing a mean girl and was a fun challenge.

What attracted you both to the film and why did you want to play these characters?

Chiara: What attracted me to the film was the incredibly well-written and scary film. The characters and story were unique, and I knew I wanted to be a part of a film that was different from its genre. Playing Rose was not a character that I can relate to because of her attitude and her goals, which was why I wanted to play her. Acting as someone who is totally different form yourself is a fun and interesting experience, and I am so excited for everyone to see it.

Bianca: I love horror films and the thought of being a part of one made me eager to start filming! Horror is one of my favorite genres of movies to watch and once I read the script I immediately felt connected to the characters and the storyline.

Donna and Rose are pretty mean to Lucas and Moriah.  What was it like filming those scenes?

Chiara: August and Mirabelle are some of the sweetest people I’ve ever met and ever worked with, so playing mean to them was so hard at times. Whenever I had to do stunts with August, and our characters were either hitting or tackling him, I would always ask if he was okay, and August was amazing. He was always encouraging me to keep being mean to him, and those fight scenes turned out great.

Bianca: It was extremely fun and challenging at the same time. I am very close friends with the actors who play Lucas and Moriah, so when I had to say terrible things to them, I felt so bad, but I was enjoying it at the same time.

What were August Maturo and Mirabelle Lee like to work with?

Chiara: They were amazing to work with. We would have so much fun on set, and anytime we had off or we wrapped early, we would always hang out with each other. August and Mirabelle are incredible scene partners, and I am so close to them to this day.

Bianca: The absolute best! We all became super close during filming and working with them everyday was such an incredible experience. They were great to work with and bounce ideas off of which made scenes with them more natural.

I understand that the cast and crew were like a family when you were making the film. What did you learn from director Jeremiah Kipp and actor/producer Mike Manning?

Chiara: I learned so many things working with the talented Jeremiah. He is so open to any improv or any notes that makes our character seem more real to us and gave great advice. I absolutely loved working with him and would be amazing to work with him again. Mike Manning is an astonishing actor, and such a great person to know personally. We have known him for more than 8 years now, and for Slapface to be our first project together was remarkable. I learned so much from him, and I have taken his advice for every project since then.

Bianca: I learned so much about production and acting from Jeremiah Kipp and Mike Manning. One of my goals in life is to become a film director and Jeremiah was extremely engaging and always answered my questions when I asked. Mike is such an incredible actor and was super encouraging on set.

What would you say was the biggest challenge of playing these characters?

Chiara: Definitely the meanness and cruelty attitude that Rose has. She is a character that people will not be happy with at times and wanting to make her likable was challengingbut amazing at the same time. It was exhilarating to see these scenes come to life and seeing Rose’s hard-shell on screen.

Bianca: I would have to say the biggest challenge of playing Donna was figuring out what was her motivation to be rude to Lucas. Before filming began, I worked on my character to discover her motivations which helped me connect more to her.

You both started acting at a very young age. What has it been like growing up in the entertainment industry?

Chiara: Starting our career in the entertainment industry at three years old on the Young and the Restless was a great way to learn everything on a set. Ever since, I have grown to find any set like a second home to me, and it feels incredible to be around people who are as eager and excited about that project as well. I love acting and started to learn all aspects of the entertainment industry to expand my horizons. When I get older, my dream is to still do acting, but to become a screenwriter.

Bianca: It’s been a journey! This industry is extremely difficult and will have a lot of ups and downs, but I’ve loved every second of it. I’ve learned a lot about life and business through my 13 years of being in the entertainment industry that I probably would not have learned otherwise.

What can we see you in next?

Chiara: Next, I am in a movie called ‘Bandit’ with Josh Duhamel, Mel Gibson, and Olivia d’Abo. I play Gibson’s daughter in this action film, and I can’t wait for everyone to see it. ‘yA’ is a spinoff show of ‘The Bay’, which follows Bianca and I’s characters, Frankie and Regan Sanders, as they move to Bay City and get involved in drama. ‘The Bay’ will be returning for season 7 and should be released at the end of this year as well as ‘yA’.

Bianca: I recently wrapped a film called ‘Call Jane’ which is about a woman who seeks an abortion in the 1960’s and works with an underground group of women to help others. The film stars Sigourney Weaver, Elizabeth Banks, and Kate Mara and I play Kate’s daughter, Erin. A comedy movie that I was in called ‘Lady of the Manor’ just released last week and it stars Judy Greer, Justin Long, and Melanie Lynskey. Besides those projects I am working on a few others and starting to write some of my own.