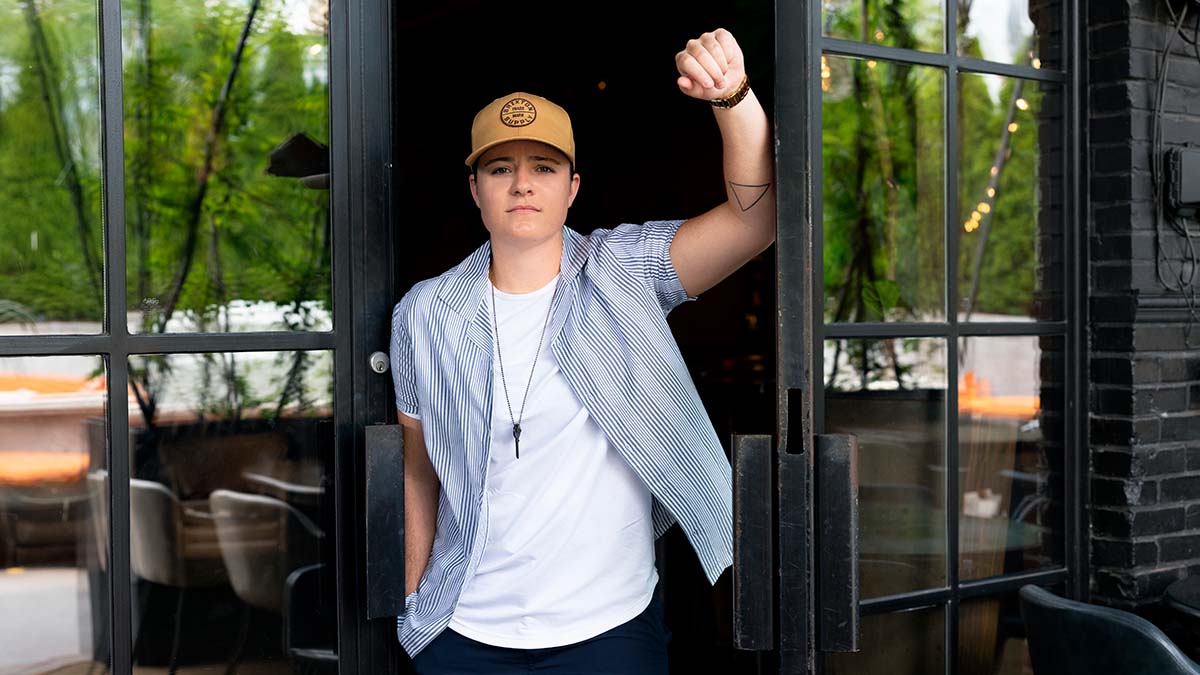 Lily Rose is one of the crop of new Country artists making waves after blowing up on social media app TikTok.

Her song ‘Villain’ exploded on the platform late last year, which led to her signing a record deal with Big Loud Records / Back Blocks Music and Republic Records. This week, Rose will continue to build on her incredible success with the release of 7-track project ‘Stronger Than I Am’, released on Friday 1st October 2021.

I spoke to Lily earlier this week to talk about her rise to prominence, discuss the influences that helped shape ‘Stronger Than I Am’ and to find out how she’s feeling ahead of her US and Canada run with Chris Lane…

You’ve had a fantastic year career-wise after blowing up on TikTok at the end of 2020 and then signing a label deal in January. What’s that been like?

It’s been wild. To put it in perspective, 365 days ago I didn’t even have TikTok downloaded. That’s crazy in itself. It’s been a whirlwind to say the least but I’m just really, really grateful. I’ve been working really hard for a long time to get here and it feels like everything’s falling into place.

Now you’ve got a label behind you and you’re 7-track collection ‘Stronger Than I Am’ is coming out, how are you feeling about that?

It’s beyond exciting and I’m just really excited to get more music out. I can see what putting one more song out every month is already doing during the live shows. To give them more music over the next six months, especially, I could not be more excited for that.

‘Stronger Than I Am’ is a real mixture of sounds, genres and influences. How did you shape your sound?

I didn’t really grow up on Country music. I grew up on Bruce Springsteen and a lot of top 40, which was cool. Thank you Dad for always playing music in the house and my mom. It wasn’t until I got my car when I was 16 and I had control my own radio for the first time that I started falling in love with Jake Owen, Luke Bryan, Jason Aldean and all those guys back then. It’s really cool, this project when I look at it especially just sonically, all of the different influences, especially all my rap influences from Atlanta. I grew up in Atlanta so I love rap and I feel like songs like ‘I Don’t Smoke’, ‘Villain’ and ‘Remind Me Of You’ really bring those elements out, while ‘Stronger Than I Am’, “Breakin’ In” and ‘Know My Way Around’ do a great job of that singer-songwriter thing that I love. Joey Moi crushed the production on that. All seven of these stories are really special but I think sonically they all somehow become cohesive when you listen to them as a whole.

This collection is definitely pushing the boundaries of what people would consider to be Country music. Do you feel as an artist that there’s more freedom to do that in the streaming age and less reliance on genre?

It’s definitely easier. I feel like right now we’re in the collaboration era. I think we’re gonna look back in 10 years and be like, ‘remember when everyone was doing duets and collabing?’ Kane (Brown), Dan + Shay, Morgan (Wallen)… all these people doing all this stuff with pop… FGL they had the biggest Song of the Year. It’s definitely easier but I think that genre is always going to somewhat play a role especially in Country just because of Country radio. It carries much weight and it’s almost a currency at Country radio of how many number ones you have. I think it’s always gonna be there but it’s definitely getting easier, which I’m pumped about as you can probably hear from my music (laughs).

Country radio is so interesting because we don’t have anything that holds the same weight as they do here in the UK. It really is a game that you have to play to get on the charts isn’t it?

Yeah, a little bit. My Dad’s in radio so I grew up understanding what radio is, but I’ve never seen anything like Country radio. The fans, they still are married to it. I love Country radio and I think we’ll always be a little bit more exclusive to our format because of them. It has such a huge role in our genre.

You’re part of the crop of modern Country artists that are breaking on TikTok and translating that into tangible commercial success. What’s that like?

YouTube is the closest thing we’ve ever seen to (TikTok) but you have immediate market research within 24 hours, which is nuts. Obviously, there’s a little bit of an algorithm and the app itself can help you but if people are commenting and liking it, it’s gonna pop up on other people’s pages. I’m really proud to be a part of this class of the TikTok kids and artists. The thing I’m trying to do to differentiate myself is to be a movement and not a moment. I want to still be around in the next 2/3/5/10/20 years. It starts with projects like this one and I’m pumped about it.

For me, what differentiates you from everybody is your voice. It’s so distinctive and that’s so important. When did you know you had it?

Thank you. That’s seriously one of the best compliments so I really appreciate it. There’s some people that have been around in my life since I put out my first college EP in 2014 and they’re like, ‘you’ve got a little bit of a twang now’ and I’m like, ‘no, I don’t. Go and listen to all of those EPs of me trying to be a singer pop songwriter’. I feel like I’ve had this voice forever and now it’s Country music behind me in the last five years. I started singing when I was 13 or 14, and writing songs. I was always just that kid that was an athlete but would bring my guitar to our firepit hangs after the games and would sing Taylor Swift and Maroon 5 covers. I always loved to sing but I didn’t know I wanted to be an artist and a performer until I got to college. In 2013 I started doing open mics and it snowballed from there doing the bar circuit.

Was it the rush of performing live or the reaction that you were getting that made you realise this could be a viable career for you?

Definitely both. I think in high school, it was more of the reaction aspect of it. Man, I thought sports had the biggest adrenaline rush until I got on stage in front of people and I was like, ‘I’m gonna have to chase that forever. That’s pretty cool’. I would play to empty coffee shops and bars but the people that were there were always like, ‘I’ve never heard a voice like that’. I’ve always said (I was) just chipping away at an iceberg with a soup spoon until something gave me the ice pick and it just cracked right open. TikTok was that, which is crazy to me (laughs).

I still have no idea what I’m doing on TikTok. I don’t want to put myself out there dancing and embarrass my family and friends…

I know! Trust me, I’m the same way. I have weekly conversations with my management where they’re always like, ‘you gotta post more TikToks’ and I’m like, ‘yeah, but I’m not doing the gimmicky stuff. I’m not doing it. I just can’t’ (laughs). I think that’s the secret to the app, if I can look at everybody that’s gotten a record deal, in this genre at least, one of the common denominators is the authenticity. There’s not a whole lot of forcefulness and the gimmicky situation. I love Priscilla (Block) and (Andrew) Jannakos, and all the other homies that have all come off the app. It’s been cool to watch us all come up a little bit.

You’re heading out on tour with Chris Lane soon. He seems to be getting bigger and bigger by the day. How are you feeling about that tour?

I’m so pumped. Chris has always been one of those artists that I’ve looked up to sonically. Whenever I feel like I might be pushing the genre a little bit, I think of Chris Lane songs, and how much he has Country elements in his songs, but there’s also so much pop in them. They’re bright and they’re fun. I couldn’t imagine being on a better tour, getting to do theaters across the Country and up into Canada with somebody else that has such a bright pop fun show.

Yeah, you are a really good like match, aren’t you? Fancy bringing that over to the UK?

What’s it been like getting back to touring now the world is opening up a bit more?

It’s definitely been wild. America really had a big dip in cases back in May so everything just opened back up for the most part. We did a three show headlining run all within 100 miles of each other and sold out all three of them. 800 people in a room, just screaming back the three songs I have out and trying to learn the words in the moment of the songs they’d never heard before. It’s insane. That’s why I’m so excited for Chris Lane, because just getting out there and meeting the fans and spending an hour at the meet and greet table and all of that, it makes such a difference.

Have you started to think beyond ‘Stronger Than I Am’?

Right now it’s just touring on the mind for me. Getting out there and seeing how these songs do live. I’ve been playing ’em but people haven’t had the song to learn yet. Now they almost have all of the songs that we play live to jam to on Spotify and Apple and all that good stuff. I’m excited to see that but I’m excited to see what the next song’s gonna be. I don’t think the ‘Villain’ chapter will ever close. I think that’s going to be a song that is a career song of mine that stays with me forever. I’m excited to see what the fans choose and what’s going to be the next one.

Yeah, it’s pretty massive. I enjoy the challenge of that and I’m always going to try to write the one that can be bigger than the last.

Lily Rose’s ‘Stronger Than I Am’ will be released on Friday 1st October 2021. Watch the video for ‘Villain’ below:

In this article:Featured, Lily Rose