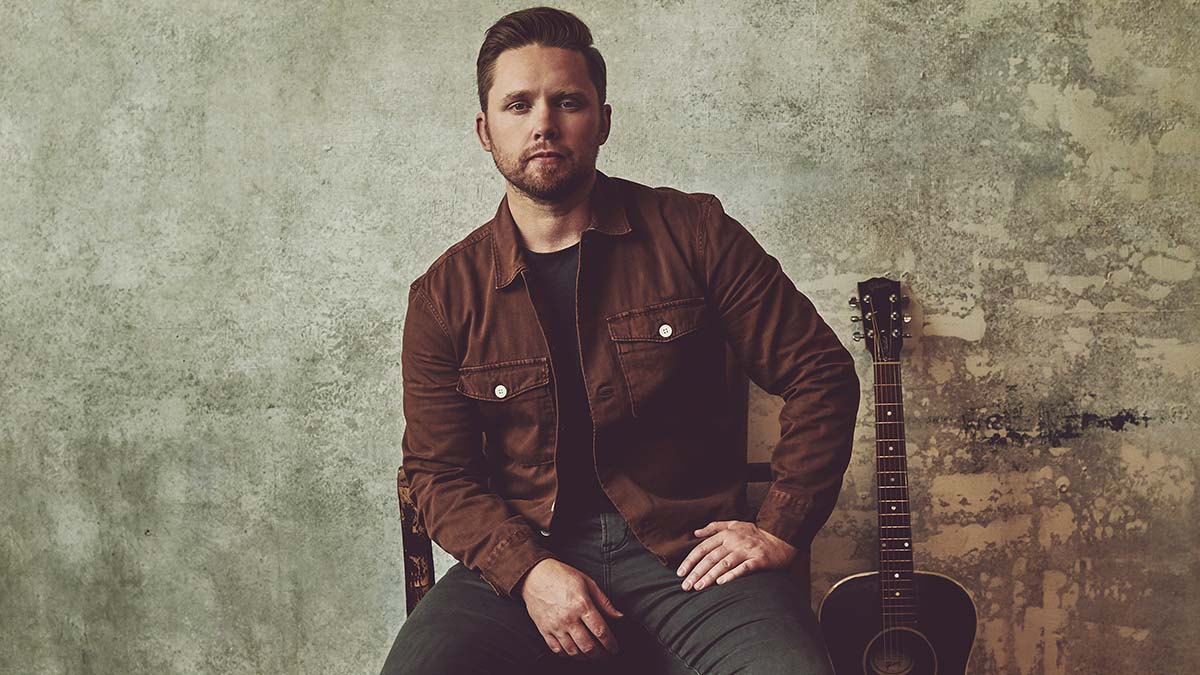 Singer-songwriter Jameson Rodgers celebrated his first number one single ‘Some Girls’ while the world was in the midst of the pandemic.

Earlier this year he built on that success with the release of his EP ‘In It For The Money‘ and now he’s rounding out the year with the arrival of his debut album ‘Bet You’re From a Small Town’. The 15-track set positions Rodgers as the next big breakout star in the genre and it features his Luke Combs collaboration ‘Cold Beer Calling My Name’.

I spoke to Jameson recently about releasing his debut album, to discuss the songs he’s excited for fans to hear and to talk about returning to the road…

It’s nice to see you again. We last spoke when you released the ‘In It For The Money EP’ back in April. I saw you got married recently, congratulations!

Time flies by doesn’t it?  My finger’s feeling a little weird these days (shows his ring finger to the camera). Man, I cannot quit playing with this ring. I don’t know if that ever goes away.

It’s the same for me. I still play with the ring on my finger and often end up dropping it on the floor somewhere…

How did the big day go? The photos looked amazing!

Oh, man, (it was a) perfect day. Everything went as planned, so smooth. We had all our family and friends there. It was the best day ever.

It’s a big year for you in terms of life events. You had the EP, then you got married and now your debut album, ‘Bet You’re From a Small Town’ is out. How are you feeling about finally getting the album out there?

You work your whole career to put out an album. I’ve been in Nashville 11 years and in a weird way I feel like I’m just now at the starting line. I grew up reading liner notes and CD booklets. I got to read through mine the other day for the first time and it’s just a surreal feeling. It’s what you work so hard for. All these songs are just a part of my soul so hopefully everybody digs it.

Some of the songs from ‘In It For The Money’ are on here but there are lots of new songs too. Was this project written as one body of work or are these songs that you’ve collected over time?

Definitely songs I’ve collected over a period of time. We started recording some of these songs a couple years ago. As a songwriter, you just collect so many songs that you write over the years and then you just put them in a pile and let them wait their turn. A couple years ago we recorded four or five songs, and then we’d go six months and record another four or five songs. Some songs ended up being on the ‘In It For The Money EP’ and the rest of them we sat on for a little bit. I thought, ‘why not? Let’s just just put the album out now and see what happens’. I’m definitely just excited. Exciting times, man!

Which of these songs are you most excited for people to be able to hear?

The record sounds very cohesive and even though it’s largely about heartbreak, the album still feels upbeat. Was that intentional in the production or is it simply how the songs turned out?

A little bit of both. In the back of your mind, you’re out playing shows and you realize there spaces in the set where it could use a few more up tempo songs. That just comes from being out on the road and playing 1,000 shows. Definitely a conscious effort of that but also we ended up just picking my favourite songs I’ve written over the last few years. Best song wins. There just so happened to be a few up tempos in there too.

When you’ve got such a wealth of material, how do you even go through that process. Is it a case of listening to every song and then deciding? What’s the process?

I’m glad to see that ‘Good Dogs’ is nestled in there as the penultimate track, just to keep the tears flowing for the rest of the year…

Just to nudge in the dagger, twisting it a little bit while it’s still in there… (laughs)

I had just recovered from it following the EP release then the song came on when I was listening to the album and I was like, ‘damn!’…

(laughs) I know, man. That one’s been a crowd favourite over the last few months since it’s come out. I’m glad to know people love it and hate it at the same time.

I absolutely love it, I just can’t listen to it…

When you get over to the UK, and you play it live, you’re either going to hear hysterical tears in the middle of the crowd or I’m just going to have to leave…

The world has opened up a fair bit since we last spoke. Are you able to get back out there and play these songs now?

Yeah, our first show was at the end of May so we’ve been basically out every weekend, except the weekend I got married, on the road playing shows. This past weekend is the first weekend we started playing some of these new songs. We threw in ‘Bet You’re From A Small Town’, ‘You Won’t’, ‘Girl With the Broken Heart’, ‘One Day’… so it was good to get a gauge on some of those songs because obviously the songs weren’t out yet. Most of those songs when we were playing them by the second chorus I could tell people were wanting to sing along. That’s a good sign.

(laughs) Yeah, at least they’re not leaving or going to get a beer during those songs.

I know it had been really hard for you not being able to get out on the road. Has it been emotional to get back in front of crowds?

Oh my gosh. I took it for granted before the pandemic. Nothing like that has ever happened so why would I ever consider that even being a possibility of things getting shut down? That was a tough 15 months so it was definitely emotional getting back with the band. It’s like a brotherhood sso getting back on the stage and just getting back on the road with those guys was such a cool emotional experience. The first show back, I had never played a show with a number one song. ‘Some Girls’ went number one during a pandemic, which is not exactly how you draw it up, but we’re definitely making up for some lost time.

Yeah, absolutely man. It’s been literally a dream come true every night getting to walk out on stage with a couple of hits. It’s been awesome.

Now the world is opening up and touring has started back up, I hope that means we’ll see you here in the UK next year?

I know man, if not next year definitely the year after that.

It’s got to be next year. I need to hear ‘Good Dogs’ live and just put it behind me once and for all…

(laughs) Get that under your belt. That’s funny!

(laughs) We’ll get that done soon.

Is there anything else you want to get in before Christmas arrives?

It’s hard to even think that far ahead because I have so many shows booked from now until then, which is an awesome feeling. It’s just so good to be busy again and I’m just happy to be tired.

I’ve heard from artists that they often don’t look at the whole schedule as it can be overwhelming. Do you look at it?

It has gotten me a time or two if I try to look at it too far in advance. I try to keep it within a week or two window and just focus on that.

Yeah, we had to push the honeymoon back to the end of October. It’ll be nice to have at least a break to look forward to from now until then because both of us are so busy until then. That’ll be much needed.

Jameson Rodgers’ album ‘Bet You’re From a Small Town’ is out now. Listen to the title track below:

Advertisement. Scroll to continue reading.
In this article:Featured, Jameson Rodgers