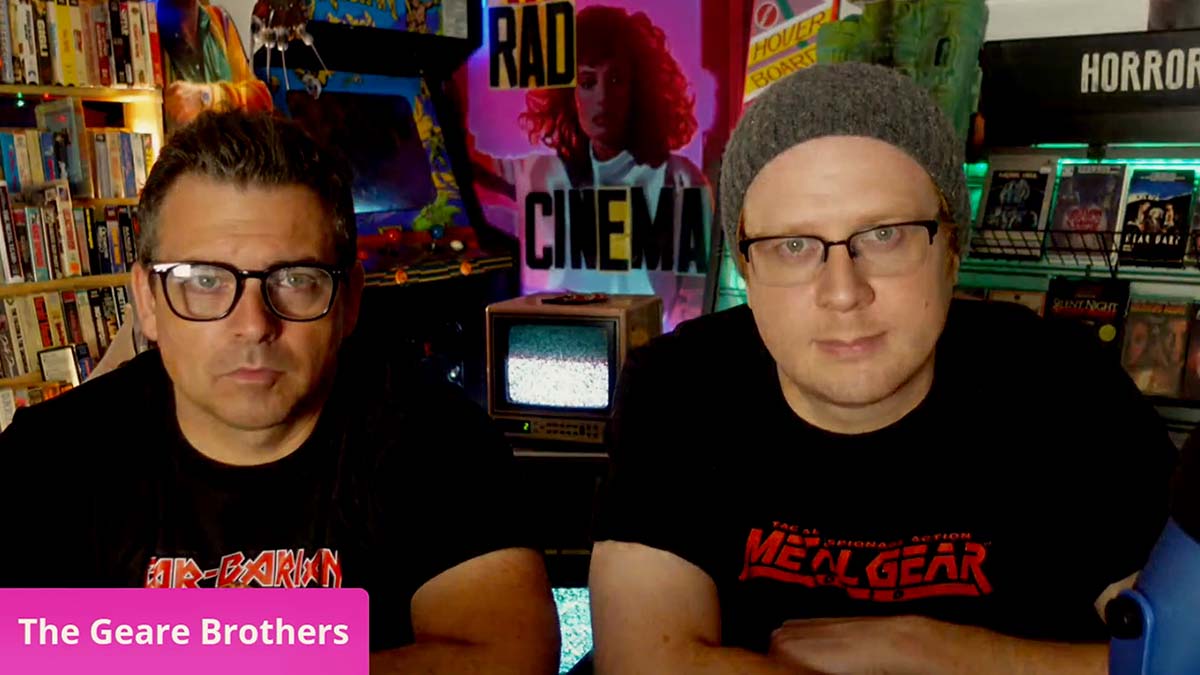 The Geare Brothers – Darren and Jeff Allen Geare – grew up with an obsession with genre cinema.

Their first film ‘The Retaliators‘ – an homage to the 80s splatter horror genre – recently had its World Premiere at Arrow Video FrightFest. The film tells the story of a father seeking revenge after his teenage daughter is brutally murdered, and in the process he uncovers a dark underworld he didn’t know existed.

I caught up with The Geare Brothers following FrightFest to talk about the real-life inspiration for the film, their love of horror and the challenges of bringing the film to the big screen…

Your film ‘The Retaliators’ recently had its World Premiere at Arrow Video FrightFest. What reaction did you get from the audience?

We have been so blown away by the audience reaction from our Frightfest premiere. We knew we had a twisted vision for this story. We wanted the journey to start like a grimy crime thriller that was also a meditation on fatherhood, grief and faith …  but then slowly lull the viewer into a wild left-turn that ultimately becomes a thrill ride that pays tribute to classic 80’s horror. Our dream was for people to understand it, connect with it and go with it. The audience reaction was so positive, it has been overwhelming. They have expressed what an exciting ride the film took them on. What a unique journey it was for them. They seemed to really enjoy the whole twisted trip. They got that despite the serious heart of the film, it is ultimately very much a love letter to everything from ‘The Evil Dead’ to ‘Die Hard’ and ‘The Terminator’. We couldn’t be more thrilled.

Where did the inspiration for ‘The Retaliators’ come from?

The inspiration was of a very personal nature. Our sister, Jody, was the victim of a vicious rape assault when she was just a teenager. She was walking home at night and was attacked by a stranger. She fought off her attacker and miraculously escaped by crawling out of a 20-foot ravine. Years later, her attacker was caught. He turned out to be a serial rapist. My sister then had to endure a trial that lasted for 1. years. It was during the time of the trial that we got the inspiration. Part of dealing with the pain, we started fantasizing about an underground service that provides “5 minutes alone” to the loved ones of crime victims. We sort of just played with the blurred morality lines and consequences that kind of offer could produce. What would it be like to be confronted with that kind of proposition. The happy ending for our sister is that her attacker was sentenced to 22 years in prison and she has gone on to become a successful firefighter. In fact, she is now one of the few female fire captains in the United States. She is proud to be the inspiration for our story. She has encouraged us to get her name and story out so that she can be an inspiration to women.

Michael Lombardi plays the lead role of Bishop and he is a producer on the film. What was he like to collaborate with?

Working with Michael has been an amazing and awe-inspiring experience. He has the most incredible work ethic I have ever encountered in my life. Michael understood the vision of the film from day one and he led the production through hell and back to realize the vision. Watching him lead the production through the early days of the pandemic was unbelievable. He literally never paused for a second. He swiftly moved to solve one problem after the next without an ounce of hesitation, always keeping everyone’s health in mind and maintaining a safe environment. All the while, absolutely crushing his performance as the demanding lead role of the film, John Bishop. Being on the set and watching Michael transform from leader to commanding the emotional range of John Bishop was incredible to watch. Especially because he would just transition and transform back and forth on a dime. Because of the obstacles that confronted production during the pandemic, Michael even ended up directing several scenes himself — and they’re some of the most complex sequences and ultimately, some of the best scenes in the movie.

The film pays homage to the splatter horror of the 80s. Which films would you say influenced your screenplay?

We are lifelong, obsessive fans of horror and action cinema of all kinds. 70s and 80s, genre, exploitation, b-movies, great horror, bad horror. We absolutely pay homage to 80’s splatter horror. It’s such a fun sub-genre we genuinely love and respect. Classics like ‘Pieces’, ‘Basket Case’ and ‘Re-animator’ are among some of our favorites. The horror films that most directly influenced the sensibilities of ‘The Retaliators’ would be classics like Sam Raimi’s ‘The Evil Dead’ and Wes Craven’s ‘The Hills Have Eyes’. From the modern era, Kim Jee-woon’s ‘I Saw The Devil’ and Eli Roth’s ‘Hostel’ were also influences. In our third act, we really wanted to have the audience drawn in and then have the story suddenly explode into a lot of action and some fun, extreme gore moments. We’re big fans of the visceral impact that effective gore can have in genre cinema. Films like ‘The Thing’, ‘Cannibal Holocaust’ and ‘Audition’ are all especially unforgettable because of the incredible practical effects and extreme gore. Additionally,  our influences in the action genre are just as wide-ranged. Don Siegel’s stylized, grimy crime thrillers from the 60s to his ‘Dirty Harry’ series in the 70s and 80s are a huge influence. We also love high-quality 80s action like ‘First Blood’ and ‘The Terminator’ to fun shlock like ‘Commando’.

What was the biggest challenge in terms of bringing your screenplay to the big screen?

The biggest challenges in getting the film made occurred during production. We were in the middle of shooting when the pandemic hit and the world shut down. This obviously created endless challenges and obstacles for production. As far as the process of getting our screenplay sold and produced — we were ridiculously spoiled with green lights. We know how hard it is to write a script on spec and then actually get it sold and produced. We were incredibly fortunate with The Retaliators. Everything happened so fast. We optioned our script six months after we finished writing it. Principal photography started only 5 months after we sold it. From finishing the script to filming — it was just under a year! Michael Lombardi was the first person we sent the script to. Michael read it and three days later, was on a plane from New York to LA. We also submitted it to The Blacklist. The response was very enthusiastic. We received incredible coverage and high ratings. This landed the script on the Top List of The Blacklist. With that exposure, we started getting offers from multiple producers and studios. Once Michael Lombardi got the script to Allen Kovac and the team at Better Noise, everyone just responded to the script and the vision of the film so passionately and efficiently. We all connected to the same vision and committed to the project. An incredible crew was built very quickly. With Allen Kovac’s incredible support and Michael Lombardi’s unstoppable drive, everything just moved rapidly.

Give us a little insight into your working dynamic. Do you both have different strengths that you bring to the writing process?

Our writing process is actually very enjoyable. We have a writing room, which is my (Darren’s) small back house. The room feels like you just walked into a video store/record store from 1988. It has wall to wall VHS and DVD’s, tons of vintage posters and collectibles, a stand-up arcade game, original shelving and signage from Tower Records, rows of vinyl and more. The second we get in that room, we’re always inspired and ready to create and write. Being brothers that grew up very close and watching an unhealthy amount of movies together, we have an effortless “finish-each-other’s-sentences” kind of chemistry. We always have tons of log-lines and ideas piled up. Once we decide what idea to go with, we talk about it a lot and then meticulously outline the script. We have several outlining methods we use. We keep tweaking and tweaking until we can see the whole film. Then we write the actual screenplay. We each take turns tackling scenes. We trade off. We each pick and choose which scenes we’re feeling strongest about. Then we go back and forth and edit each other’s pages. We also loosen up about the outline. We use the structure as a road map but we often make changes and left turns when the story organically takes us there.

What are your favourite horror movies and why?

We have so many favorites that span over many sub-genres. Possibly the greatest horror film ever is John Carpenter’s ‘Halloween’. It’s just a perfect film. No fat. All tension. Constant suspense sustained perfectly through the entire film. Another all time favorite is ‘The Lost Boys’. It is so amazing. The 80’s cheese is gloriously on display everywhere, but the film never ages. It has everything. Gorgeous cinematography. Great music. A huge, fantastic cast. Kiefer Sutherland is brilliant. It’s funny, gory, smart and cool. There’s really no other horror film with those unique qualities. ‘Return of the Living Dead’ is an absolute masterpiece. ‘Texas Chainsaw. Hellraiser’. We also love hunting down the bad ones that border on unwatchable. We grew up with Joe Bob Briggs. We’re still obsessed with Joe Bob. We even named a character in ‘The Retaliators’ after him as a tribute. We love the bad movies as much as the good ones. Horrendous titles like ‘The Howling 7’ and ‘Jack Frost 2’ are just as fun to watch for us. We laugh ourselves into tears watching those kinds of movies.

We’ve got a few new scripts we’re really excited about producing with Michael Lombardi. One is called ‘Hiss’. Our idea with it was “What if the Coen Brothers made a creature feature?” Our vision was to create a fresh and humorous spin on a creature feature that is also grounded with a neon-noir crime thriller element. The script takes some totally unexpected turns that create a lot of action and there are some outrageous kills that we’re very proud of.

‘The Retaliators’ had its World Premiere at Arrow Video FrightFest 2021 in August.