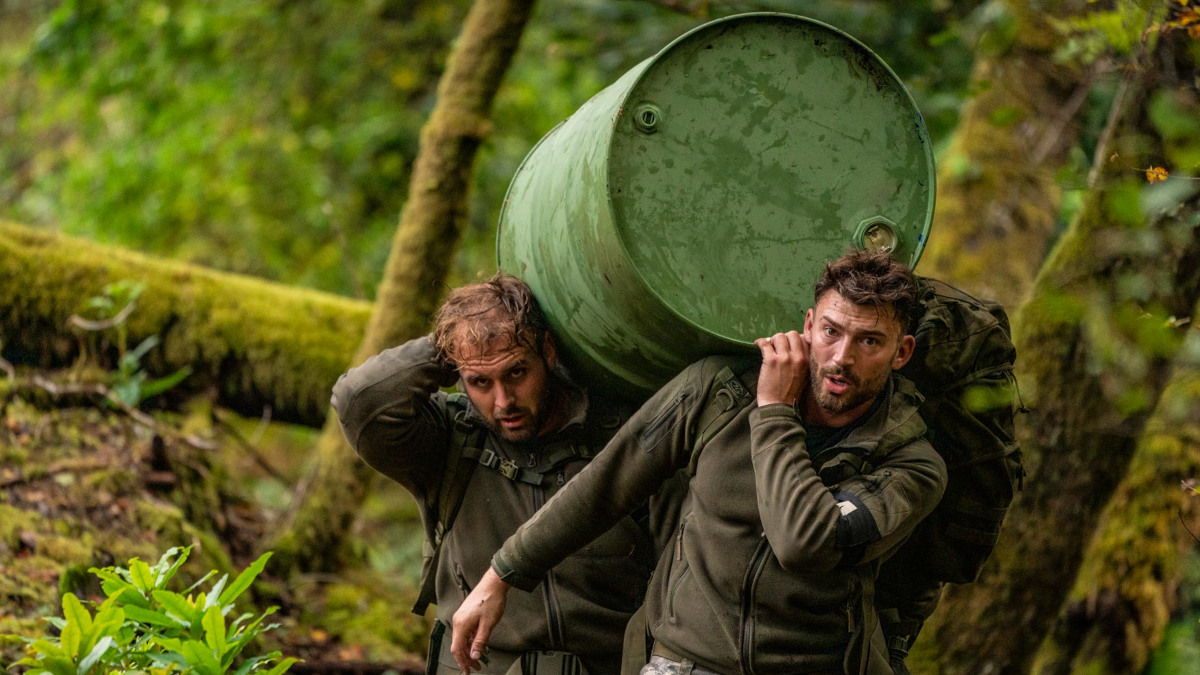 The third series of Celebrity SAS: Who Dares Wins continued on Sunday on Channel 4. The celebrity recruits continued their SAS selection course.

The second episode focused on Courage. It opened up with the DS calling for the current duty recruit, Vicky Pattison. She was busy in the barracks serving food and took a while to respond which didn’t impress. The recruits were told to be on the parade square in 5 minutes but were told off for their poor presentation. As punishment the recruits were told to each perform 50 push-ups. It was too much for Kerry Katona who decided to Voluntary Withdraw (VW).

Next the DS asked the recruits to line up strongest to weakest. Jake Quickenden placed himself as the strongest while Ulrika Jonsson placed herself as the weakest.

To get to the first task of the day required the celebs to each carry their 40kg bergens plus a 15 kg sandbag. Vicky struggled but upped her game after a talking to from Ant. The celebs were then told to make a perfect circle with the sandbags to create a wrestling ring. The DS then called out pairs to try and wrestle each other out of the ring. During the challenge Saira Khan twisted her ankle quite badly but decided to carry on.

The next task was to rescue a hostage. For the task the celebs had been given basic training in armed conflict. For the rescue they had to race into a building and make a split decision of whether to fire their weapon and who to shoot. Most of them went in guns blazing and killed the hostage. Only Alexandra Burke and Vicky managed to shoot an enemy and save the hostage.

Later the celebs had to line up again in the same strongest to weakest order. The DS then shuffled them around to show where they thought each celeb should be. They placed Alexandra first and Saira last. Ulrika was withdrawn from the course as the DS felt she couldn’t progress any futher.

The final challenge was a backwards dive from a helicopter into freezing water. After a demonstration from Ant, Saira was chosen to go first. She was nervous but executed the exercise well. Many of the other celebs also did well.

In episode 3, the 10 remaining celebrity recruits are placed in pairs and must work together for 48 hours. Can they learn to trust each other?

Their first task is the ‘forward breakman’, where the recruits must forward rappel 100 feet down a sheer rock face and rely on their partner to break their fall. Paralympian Aled Davies is determined to prove himself. After the task, the recruits are ordered to run 3km back to their transport vehicles.

Former BMX world champion Shanaze Reade is partnered with TV presenter Ore Oduba, who’s struggling, leaving the two stuck on the mountain at nightfall. The instructors launch an inquiry as to why Ore’s struggling and if he still deserves his place on the course.

In the final task the recruits carry a 40kg fuel drum in pairs across 4km of gruelling terrain as the number of recruits left on the course starts tumbling.

Celebrity SAS: Who Dares Wins 2021 continues at 9pm Sunday 12th September on Channel 4. Preview the episode with our gallery: