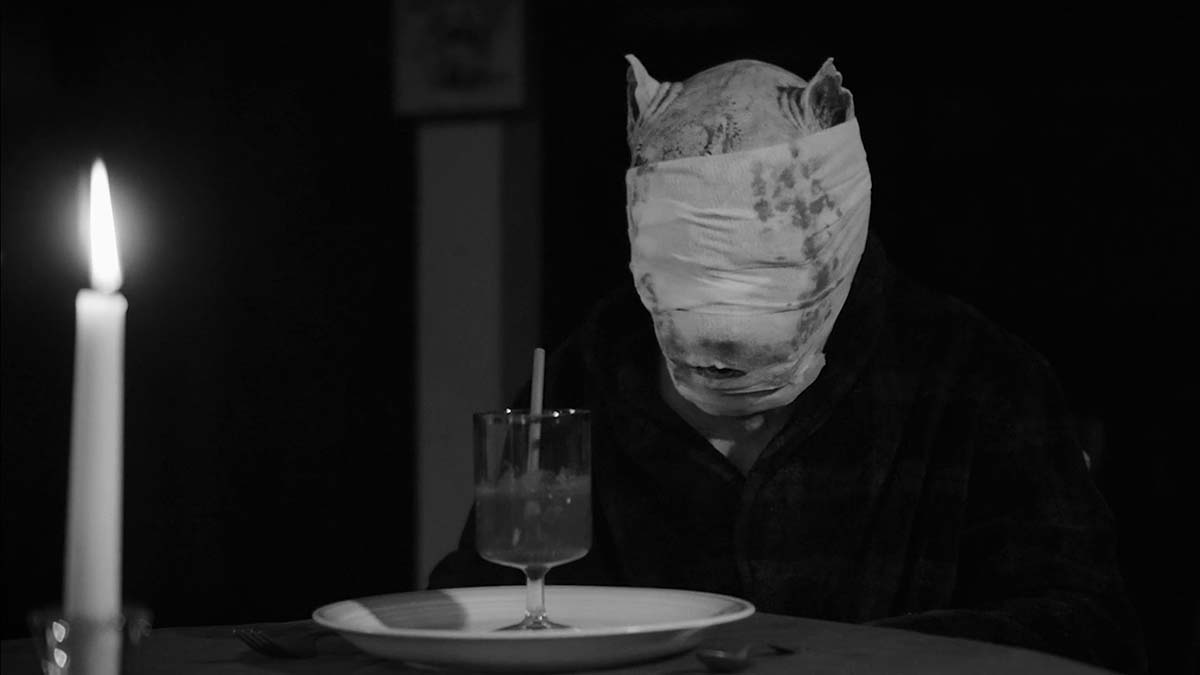 Dom (Josh Stifter) produces a monster-hunting web series with his friend Miles (Keith Radichel) and he’s on the verge of giving up until a video tape arrives at his home showing footage of the El Chupacabra demon. Convincing Miles to accompany him, Dom travels to the woods where the footage was filmed and meets with landowner Doug Greywood (Daniel Degnan). They set up camp in the woods hoping to see the demon for themselves but as tensions rise between Dom and Miles, they don’t realise just how much danger they’re in until it’s too late.

“Greywood’s Plot” is a film from director Josh Stifter, who co-wrote the screenplay with Daniel Degnan (both of whom star in the film). A love letter to found footage and creature features, the film is shot completely in black-and-white and mixes humour with some seriously dark twists and turns. At the heart of everything is Dom, a man who lives with his mother and doesn’t really have any direction or purpose in life. Completely unaware that his friend Miles is keen to put their partnership behind him and grow up, Dom is driven by the belief that he’s on the verge of capturing something truly special that will change their lives.

The first half of the film really explores the dynamic, and strain, that exists between Dom and Miles. The two men seem to have a friendship built simply on the basis of familiarity, and it’s clear that they don’t really communicate with each other. Miles reluctantly joins Dom for his latest adventure and it’s not long before the two men walk slap bang into the middle of a nightmare. Not sure if they’re in the middle of a hoax or if they’ve been lured to woods for something sinister, Dom and Miles’ relationship fractures irreparably leading to a series of horrific events that will change their lives forever.

“Greywood’s Plot” may have been pulled together on a miniscule budget but it shows more ambition and inventiveness than a lot of films in the horror genre. Stifter draws out realistic performances from his leads (and himself, of course) but it’s the way they pull off the visual effects in the second half that is truly impressive. I don’t want to reveal too much about where the plot goes because the element of surprise is definitely one of the strongest aspects of the film, but when Dom and Miles realise the situation they’re in, things get gory and stomach-churning very quickly.

Balancing out the horror elements is humour and Stifter and Degnan’s script is packed with funny moments. They manage to move between scaring you one minute and making you laugh the next. That’s not an easy balance to get right but they succeed. The two also conjure up a world that feels believable, even when things get a little bonkers. They also know how to make sure their story stays with you once the credits roll.

“Greywood’s Plot” is proof that you don’t need a huge budget to be able to make a good film. All you need is a strong plot, passionate film-makers and an ability to be inventive. Stifter’s film is incredibly inventive, making use of the less-is-more approach, and pulling off some seriously impressive set-pieces. With a tongue planted firmly in its cheek, “Greywood’s Plot” is a fun campy ride that doesn’t outstay its welcome but will stay with you after you’ve seen it.