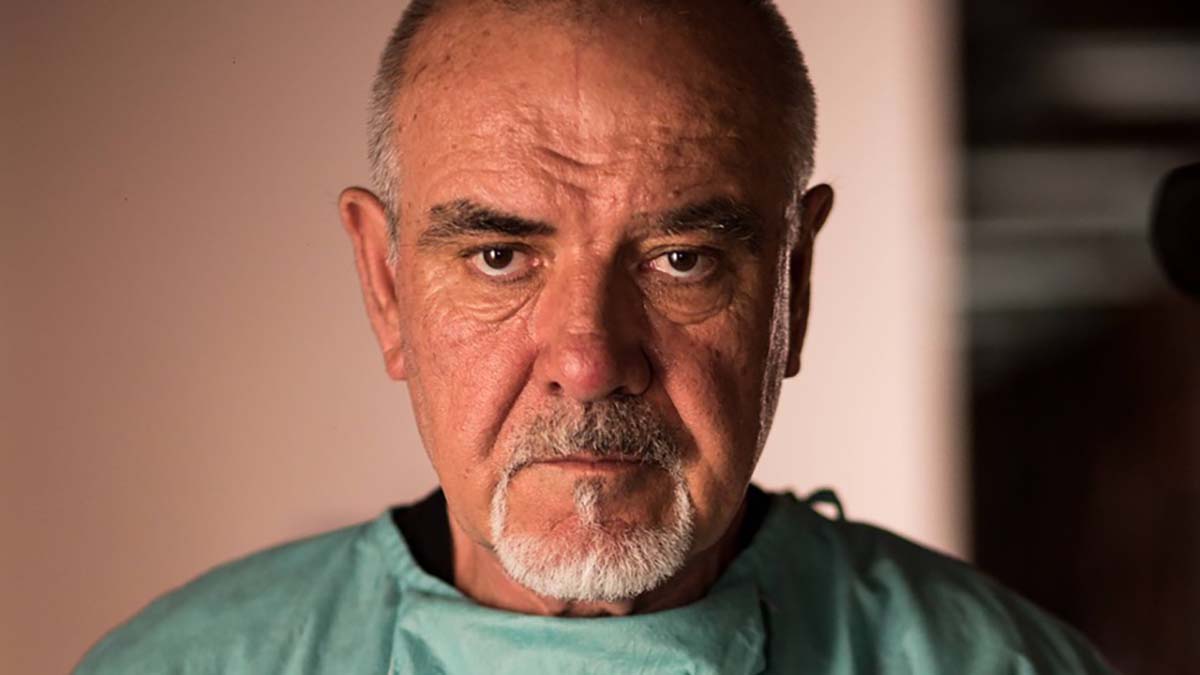 Film-maker Peter Daskaloff is bringing his new film ‘Antidote’ to Arrow Video FrightFest this month for its UK Premiere.

The tense horror plays on your worst fears about going into hospital and waking up somewhere else with no idea how you got there or what’s going on. It’s sure to give horror fans plenty of nightmares and it features a strong central performance from Ashlynn Yennie.

I spoke to Peter about the film to find out more about it, discuss his talented leads and talk about what he’s working on next…

‘Antidote’ will be having its UK Premiere at Arrow Video FrightFest. What’s the film about?

It’s about a young woman, Sharyn Berkley, (Ashlynn Yennie) who is held captive in an underground medical facility where selected individuals are perpetually mutilated and then healed using an antidote.

Horrified, Sharyn starts looking for an exit, but there is none. As she tries to find a way out, she meets other patients. And when their stories unravel, she figures that nobody is who they claim to be.  Soon, we learn that she too is not who we think she is.

Essentially, it’s a gritty morality tale that dramatizes the rights and wrongs we do as people, even though our hearts may be in the right place.

The story is very clever with plenty of twists and turns. What inspired it?

There was no direct inspiration. One day, I woke up with an idea about a hospital which is not really a hospital, and doctors who are not really doctors, but they share a common mysterious purpose.

Ashlynn Yehnnie gives a terrific performance as Sharyn. How did she get involved in the project and what was she like to work with?

Ashlynn is fantastic to work with. And, actually, she came on board by pure luck. Initially, we had cast another actress, who was sort of a bigger name and pretty well-established. But just about three days before shooting started she did quit for medical reasons. Luckily, our DP, Lucas Pitassi, had worked with Ashlynn before and he had her phone number. I was also familiar with her work, but didn’t know her personally. So, Lucas called her, it turned out that she was available, and the rest is history.

Louis Mandylor is chilling as Dr. Hellenbach. Why did you feel he was right for that role?

My casting director, Alexi Stavrou, brought Louis to the project. To be honest, I wasn’t familiar with his work, but when we met, I was convinced he was Dr. Hellenbach, right on the spot. Louis is incredibly talented and professional actor.

‘Antidote’ balances visual and psychological horror very well. How hard was it to strike that balance?

What was the biggest challenge when it came to bringing this film to life?

The biggest challenge was the limited budget, and the grand vision we had for the film. So, we rented a very long warehouse, and built one very long set with rooms on both sides. The idea was that if we dressed and lit the set differently for different scenes, we could create the illusion of this vast underground facility, a labyrinth of hallways and no way out.

Which horror film has had the biggest impact on you and why?

There is no single horror film that I can credit with having biggest impact on me. The one that comes closest is ‘Jaws’. Then maybe ‘Alien’.

I like Guillermo del Toro movies. They are not really hard-core horror, but I’m not into hard-core horror either. His first one ‘Cronos’ is pretty good, ‘Pan’s Labyrinth’ being my favorite.

I also like ‘Rubber’, by Quentin Dupieeux. ‘Cube’, by Vincenzo Natali. ‘Saw’, by James Wan. The list is pretty long actually.

What other projects do you have in the pipeline?

I’m just finishing a short film, ‘The Diamond Ring’. It’s about a young woman who goes out to throw her trash and as she comes to a dumpster, she finds a chopped finger with a diamond ring. It is an expensive ring, so she takes it, and dumps the finger. Which unleashes a strange chain of events.

I also have couple of feature film scripts in development. One of them is about Quantum Sound. You have never heard of Quantum Sound, because such a thing doesn’t exist. Until someone finds it does. That too, can unleash a very strange chain of events.

‘Antidote’ will receive its UK Premiere at Arrow Video FrightFest 2021 on Monday 30th August at 11.25am in Discovery Screen Two. For more information and tickets, please visit https://www.frightfest.co.uk/holdingfolder3/Antidote.html.