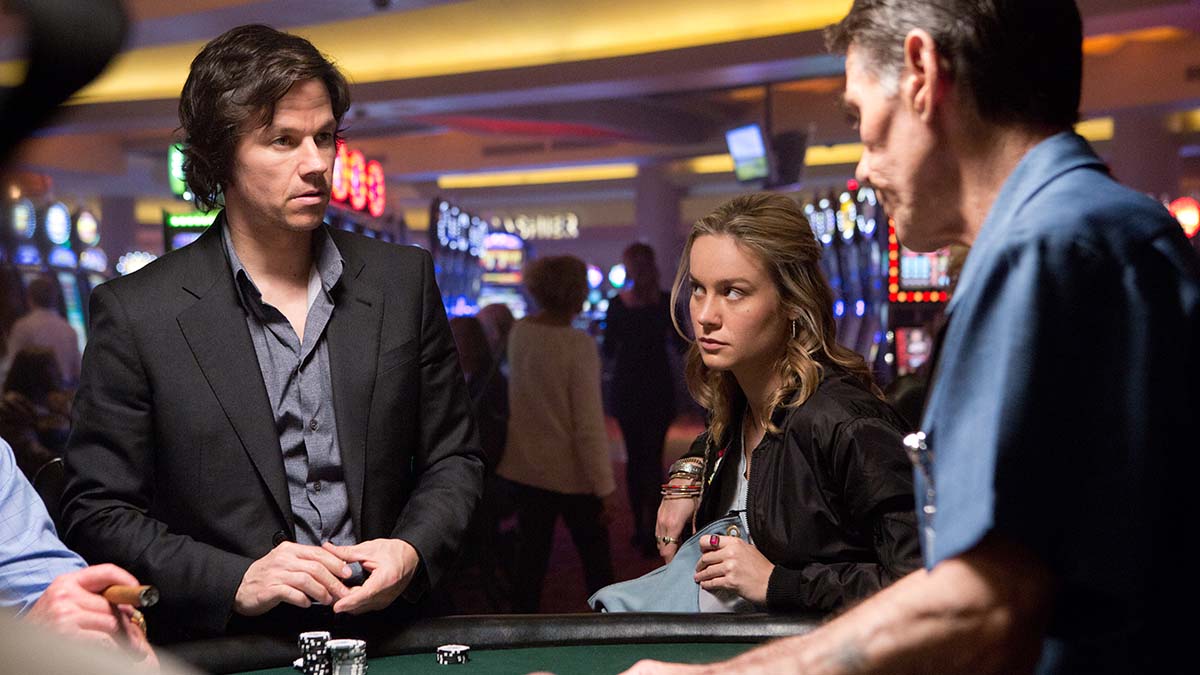 There have been dozens of movies about casinos and the people that frequent them made over the years. Some of the great, some of them less so. These gaming houses provide filmmakers with a glamorous and alluring backdrop that everyone is familiar with, even if they’ve never been inside one in real life.

So when Rupert Wyatt announced he wanted to remake the 1974 film, ‘The Gambler‘, many critics were surprised he was willing to take the risk. However, with a cast that includes Mark Wahlberg, Jessica Lange, John Goodman, and Brie Larson, the odds were certainly in his favour.

The film follows Jim Bennett, a guy who loves to take risks. By day, he works as an English professor, but by night, he’s a gambler who borrows money from gangsters to make high-stakes bets.

Jim is a complicated character who has come from wealth but has a strained relationship with his mother. Most of his behaviour is destructive and evidence of some deep emotional problems. This is evidenced early on, when he begins a rant in one of his classes, declaring that if you cannot achieve excellence in a particular field, then you should not even bother trying.

He uses Shakespeare as an example of this, explaining that almost no other writers live up to his level. He then singles out students that are working towards careers as professional athletes.

It’s clear that he holds these views about himself too, perhaps reasoning that he has failed as a writer himself and that’s why he has become a teacher of literature instead.

To make matters worse, he finds himself in a romantic relationship with Amy, one of his students, who he believes is the only student in his class that is capable of having a successful career in literature. The pair have met before though, as she works as a waitress at one of the underground casinos that Jim frequents.

The two hit it off and spend their evenings together, but this relationship puts Amy’s life at risk because of Jim’s debts.

Many avid casino players often cringe at some of the scenes they see in movies like this. The most common being the “re-raise” when characters play poker, despite this being against the rules. Thankfully, ‘The Gambler’ manages to avoid most of these pitfalls, while still including a wide variety of different games.

Jim is seen playing many of the most popular casino games throughout the movie, including blackjack and roulette. Scenes like this have often been credited with inspiring others to start playing them too. Many of these people choose to play online because of the added convenience that this offers, along with the extra gaming options and variants that are available. For example, you can even play live dealer games which bring the format to life with levels of realism that can’t be found in any other format. Of all the places to find them, this particular operator is considered one of the best, as its online casino games are second to none.

Unfortunately, the film isn’t without a few goofs in this area. During an early scene, Jim wins a game of blackjack with a hand of 21. However, he doesn’t receive the correct number of chips for a soft blackjack.

The cast of ‘The Gambler’ really helps to make the movie great. Mark Wahlberg in particular is able to step into the character of Jim and portray the internal conflicts that go on in his mind.

He has complicated relationships with everyone in his life, including his mother, his girlfriend, his loan sharks, and a father figure that tries to help him out. He interacts with them all in very different ways, both in the way he talks to them and his body language. This helps the viewer to get a much better understanding of what makes Jim tick.

Wahlberg doesn’t carry the movie on his own though. His girlfriend Amy, played by Brie Larson, is a woman who enjoys the risk and danger that come from being associated with such a complicated man, while also wanting to help him turn his life around. She is exemplary in this role.

There were rumours that Leonardo DiCaprio would be cast for the role of Jim. While he would have been great, Wahlberg is definitely not a consolation prize though as the star of hit films like ‘Patriots Day’ (2016)and ‘Ted’ (2012) has made the film great.

Jim’s mother, who is played by Jessica Lange, is also a great casting. She embodies the struggle that many of us go through when we unconditionally love someone and are conflicted on how to deal with them.

John Goodman, who plays Frank, a loan shark who tries to take Jim under his wing, is brilliant, just like in most of his other work.

The Gambler is a film about risk and the people who love to take them. The production of the film itself is a metaphor for this too since remakes of older films are notoriously risky, however, the involvement of the original movie’s producers has helped to make it a success.

The ending is a little cheesy, especially since the rest of the movie is pretty gritty. That said, it does close off most of the plot elements in a roundabout way.

Wahlberg, Lange, Larson, and Goodman are brilliant castings, who added several interesting dynamics. Overall, ‘The Gambler’ is a film worth taking a punt on if you’re struggling to find something to watch.

In this article:The Gambler