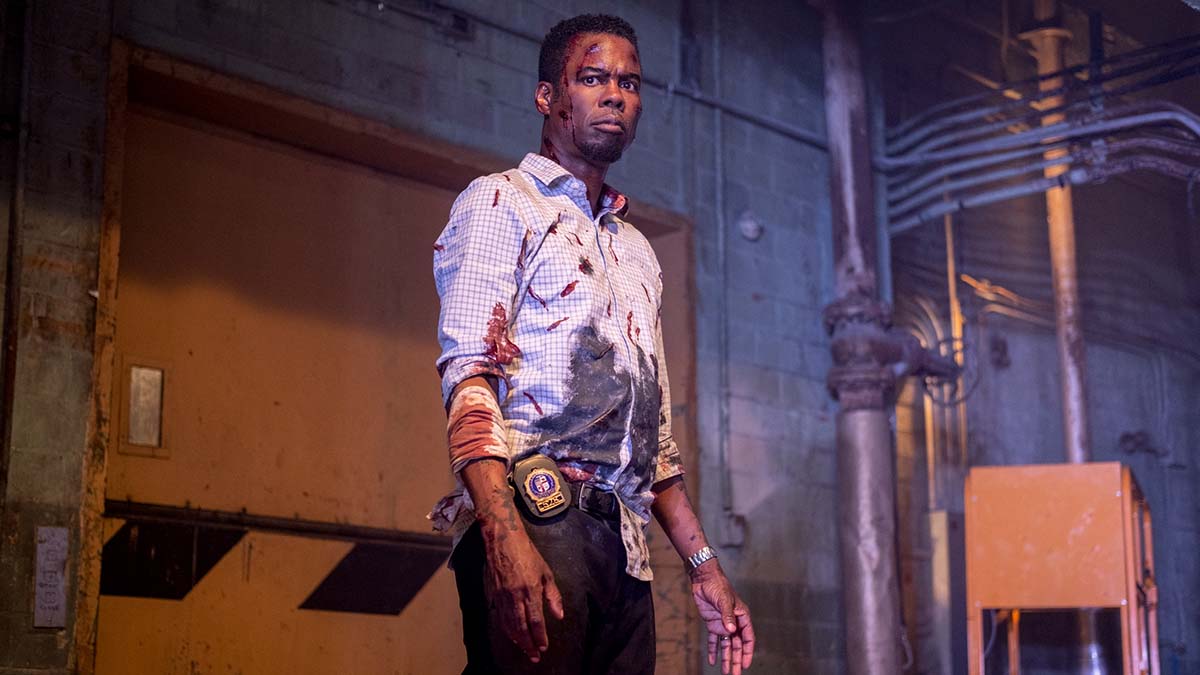 Detective Zeke Banks (Chris Rock) is partnered with rookie Will (Max Minghella) when a fellow police officer is murdered during a fourth of July parade. The grisly murder is reminiscent of the late Jigsaw killer, and Banks quickly realises that the killer is planning to pick off his team one-by-one. Locked in a race against time to stop the murders, Banks is taunted by the killer as the bodies pile up and he fights to get out from under the shadow of his police veteran father (Samuel L. Jackson).

‘Spiral: From The Book of Saw’ was supposed to arrive in cinemas in 2020 but due the pandemic, the film got pushed back a year. A reboot for the long-running horror franchise following 2017’s ‘Jigsaw’, ‘Spiral’ attempts to find out if the ‘Saw’ franchise can pivot in a new direction while staying linked to the original series. Now I should disclose that I’m a huge fan of the ‘Saw’ films and I’ve seen and own every single one. With the exception of ‘Saw 3D’, I’ve enjoyed all the movies, so I was excited to see what ‘Spiral’ could bring to the table.

Unfortunately, nothing could have prepared me for this embarrassing mess of a film, and to even write those words is pretty hard. The film’s opening shows a lot of promise with a nasty death that’s very much in the vein of the other instalments of the franchise. From that point onwards, the film falls to pieces for a number of reasons. Ahead of the release of ‘Spiral’, the team behind it has been keen to point out this isn’t a typical ‘Saw’ film with director Bousman (who has directed previous instalments) even stating that it shouldn’t be considered as ‘Saw 9’, and to be honest he’s right. Instead of a bloody gore fest, fans get a tepid and tired detective thriller instead that makes a vague attempt at commenting on police corruption.

One of the elements of ‘Saw’ that has always been appreciated by fans is that the various traps the characters find themselves in always give them a chance to escape and you find out their fate as the action unfolds. That’s not the case with ‘Spiral’, which features only a handful of traps with the end result revealed before the trap plays out, or the action playing out off-screen. Add to that the impossibility of any of the characters getting out of their traps and ‘Spiral’ betrays the entire ethos of Jigsaw. The less said about the killer’s ‘Siri’-style voice the better.

The biggest problem here though is Chris Rock. He may be a fine comedian but his performance here as a dramatic lead is woeful. Delivering lines as if he’s in a ‘Saw’ parody, he’s cringe-inducing from start-to-finish. Seemingly unable to emote, Rock resorts to shouting his lines and often his intonation results in unexpected hilarity. I didn’t believe him as Zeke and given he’s the lead star, that’s a huge problem. Add to that a very under-used Samuel L. Jackson, who gets around 10 minutes screen time, and you wonder why on earth Jackson got involved. Thankfully Marisol Nichols (‘Riverdale’) and Max Minghella (‘The Handmaid’s Tale’) turn in decent performances so there is at least something to enjoy.

‘Spiral: From the Book of Saw’ is a serious mis-step for the mighty horror franchise. It’s the first film in the series that has bored me to tears, and it leapfrogs over ‘Saw 3D’ to become the worst in the series. Why on earth the open-ended story from ‘Jigsaw’ wasn’t continued here and the film-makers decided to turn it into a police corruption/detective story is beyond me. Yes, the ‘Saw’ franchise needed to reinvent itself and break out of the formula it has stuck to but this isn’t the way to do it. With ‘Saw X’ already announced, I really hope that the creative team goes back to basics and delivers a film that the fans of the series deserve.