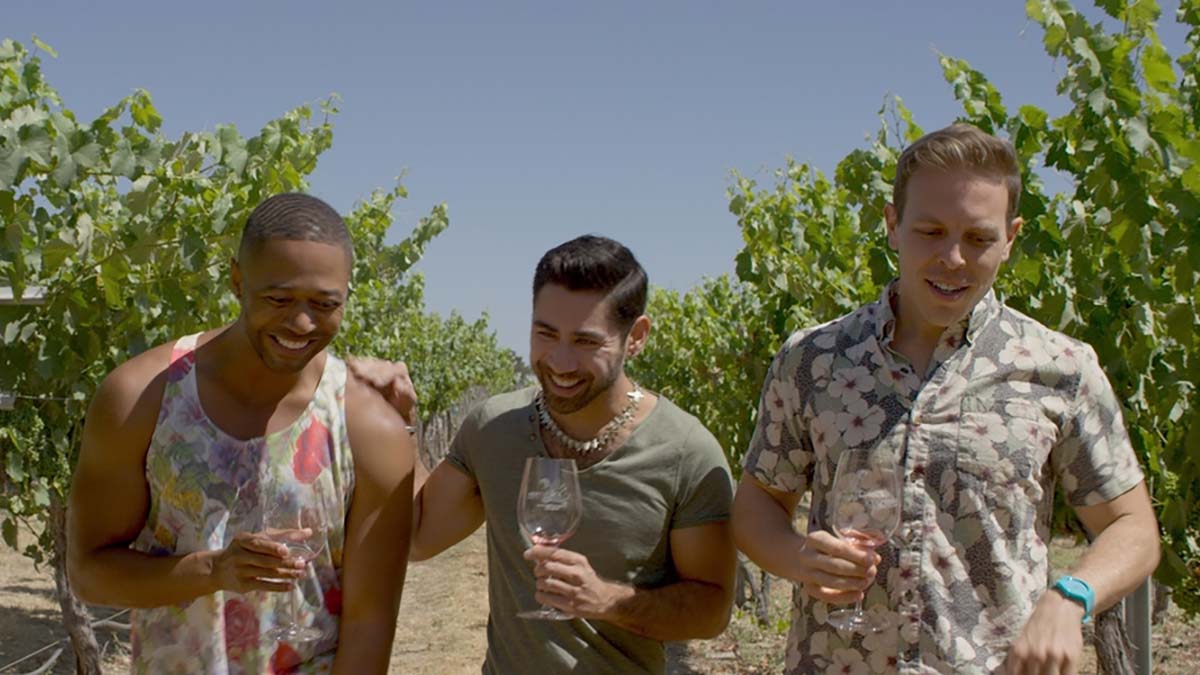 Married couple Russ (Rob Warner) and Manny (Matt Palazzolo) have drifted apart in their marriage and they decide to get divorced. Before they make it official, the couple agree to take one more trip together to talk through their issues and get closure. Heading out to Paso Robles and the many vineyards it has to offer, Russ is surprised to learn that Manny has invited their friend Byron (Thomas Hobson) along. Byron’s arrival stirs tension between the two, and the trio set about getting to the bottom of where it all went wrong for Russ and Manny.

Before I get too far into this review, I just want to disclose that this film was a hard watch for me as Matt Palazzolo, one of the leads, was a dear friend of mine who tragically died in 2018. His final film, ‘Stone Fruit’ is something I’ve wanted to watch for a long time but have been putting off as I believed it would be too painful. This week I finally bit the bullet and I’m glad I did because the film is a reminder of just what an incredibly immense talent he was.

Playing one half of the lead couple Palazzolo embodies Manny, the feistier of the two characters, switching between sweet and salty throughout the film. It’s Manny’s desire to find himself and live the life of an artist that has seemingly been the root of the breakdown in his relationship with the more straight-laced Russ, who holds down a steady job but is averse to taking risks in life. In the film’s opening moments, the dynamic between the two is quickly established with Russ the pragmatic one and Manny the dreamer.

While things seem amiable between Russ and Manny, that all begins to change with the arrival of Byron. Both Russ and Manny have history with Byron (together and separately) and the new addition to the trip is unaware that he wasn’t technically invited by both parties. As the wine starts to flow and the conversations get deeper, Byron is cast as the mediator between his two friends as old tensions and frustrations flare up while they dissect the moments where their marriage started to fall apart.

Director Brandon Krajewski, who co-wrote the screenplay with Robert Andrew Perez, achieves something that we don’t get to see too often in LGBTQ+ cinema. ‘Stone Fruit’ is the story of a relationship that has run its course, and it just so happens that it’s a same sex one. We get a glimpse into the final days of a couple who has spent a significant amount of time of their lives together, only for their world to slowly and steadily fall apart as they are pulled in different directions. That makes ‘Stone Fruit’ an emotional watch and at times it feels so realistic, that it can be difficult to watch as things unfold.

As I mentioned earlier, Palazzolo gives a superb turn as Manny but he’s ably matched by Rob Warner as Russ and Thomas Hobson as Byron. All three actors are completely convincing and their chemistry makes you believe these are three men with a lot of history. The moments of genuine affection between all three are touching, and Warner does a good job of portraying Russ as a man who knows he needs to let go but isn’t entirely sure that he wants to.

Perhaps I found ‘Stone Fruit’ more emotional than it is due to my disclosure earlier in this review but I found it really hit me in the feels. Krajewski and Perez have written a tight, if a bit wordy in places, script that gives you a real insight into what the breakdown of a marriage looks like. The film builds to a satisfying resolution with a final scene that packs the emotional punch that it needed to. On a personal level, I felt grateful to spend some time with Matt Palazzolo once again, and it reminded me how much I dearly miss him.

In this article:Stone Fruit, TLA Releasing