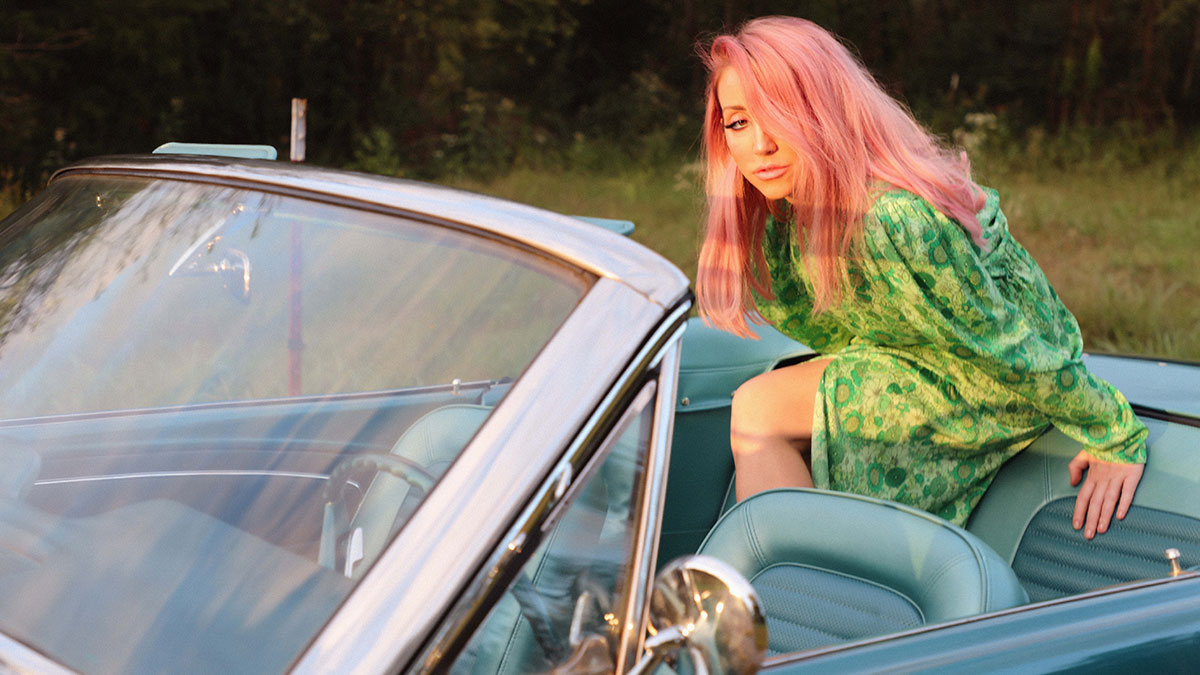 Ashley Monroe is know as both a solo artist and as one third of The Pistol Annies alongside Angaleena Presley and Miranda Lambert.

Much of her work as a solo artist has gravitated in and around the Country genre but for her new album ‘Rosegold’, released on 30th April via Mountainrose Sparrow and Thirty Tigers, Monroe is pushing her sound in new directions. Lead single ‘Drive’ hinted at the sonic shift but once fans hear the rest of the record, I think they’re going to be surprised.

I caught up with Ashley recently to talk about how the album came about, discuss how embracing joy was important while crafting the record, and to find out what the reaction has been like…

Your new album ‘Rosegold’ isn’t what fans are going to expect, and that’s one of the things that makes it so special. Why did you decide to do a project that’s so sonically different?

I’ve always done this. As an artist, I hear melodies and I write what I hear. A lot of them have been very Country, which I love and are the ones that have been on my previous albums. I’ve also always loved listening to all different types of music and writing different melodies. When my son was born that was the first trigger. I just got just paralyzed by love, this fire of love and innocence. I hadn’t seen that part of myself, that kid in me, since my dad died. I had not seen something so pure, and powerful and good. I started getting real protective of my joy. I wouldn’t say in any way I’m oblivious to what’s going on or that I don’t care when people are hurting or sad or anything like that, I just know that a lot of my life has been a lot of sadness and I just have this boundary around my joy. I won’t watch ‘Dateline’, I won’t even watch murder mysteries and I won’t watch sad movies. I don’t want any part of me to feel sad if I can help it, not that I don’t feel sad sometimes; I’m a human being I feel sad a lot. I was hyper focusing on that joy and what that feels like.

Was leaving your long-time record label a factor in making this album too?

I got let go from Warner Brothers soon after ‘Sparrow’ and I had been on the label since I was 17. Originally, I was on Columbia, then RCA, then Warner LA and then Warner Nashville, and that’s been great, what a ride. They’ve done everything they could do for me, honestly, but I don’t work on radio and that’s the way you should go when you’re on label, which is fine. When they let me go for like 15 minutes, maybe 17 minutes, my feelings were hurt and I started to feel sad, like, ‘what am I going to do now?’ I just felt this in my gut and thought, ‘oh my goodness, now you’re gonna make music because you’re free’. I have developed more confidence than I used to have. I look even back at my older pictures and walked hunched, my shoulders were hunched over and I barely looked up. I can see that me as a person, I feel more confident and take care of myself.

When you have a kid the things that don’t matter instantly fall away, you don’t even think about it anymore, and maybe that is partially what people think of me or what people perceive me as. I have confidence as a songwriter as well and I realised that’s the gift that I have that I’m supposed to use, and I don’t really see any boundaries that it has to be used in. I would love to score a Quentin Tarantino movie. He’s from Knoxville, I’m from Knoxville, we could call the movie whatever he wants, but I would love to (do it). I’d like to write with Kanye West, Lil’ Wayne or a plethora of other rappers that I love. I don’t feel restrained in any way musically.

While all that was going on, I was hearing these melodies just plain as day, clear with the words with them. All of the songs just felt like love and felt like joy. I love layering my voice, I did that on ‘Sparrow’ some too, and I love singing harmonies. I could find a harmony to sing with a box or a stick. I love harmony. Maybe it’s being raised in church, maybe it’s loving The Beach Boys and The Eagles, or maybe it’s all of it together, but I think things can come across a lot more powerful when there’s more than one voice singing in it and the melodies around it. I heard specific parts and melodies that went underneath, and I would go in to write with these people, who are amazing writers that I collaborate with on this whole album, and I would tell them, ‘I’ve got this and only love. No verse about I used to be sad. Everything is this hyper-focused beaming joy’. I was getting chills listening to these melodies in my head, my whole body would get chills before the song was even written. I’ve always wanted to give people chills with my music because I like getting them when I listen to good songs. I just think that’s the power of music, you’ve hit the nail on the head when somebody gets chills.

I thought, ‘wow, wouldn’t it be interesting to get chills for a good feeling only?’ And don’t we need that? I need that. Doesn’t everyone in the world need that, just a moment of time to be taken out or whatever you’re in and be somewhere else that sounds as heavenly as it could sound with a big, strong base underneath to drive it home. I ride around listening to a lot of stuff from Beck to a lot of Kanye West, a lot of Lil’ Wayne… I like to feel a boom underneath, that that always gives me chills to when placed right. There’s power behind it. It was almost like I was harvesting or hearing all of the most powerful elements to me that I’m inspired by right now put together behind these kind of heavenly choir things.

‘Heavenly’ is the perfect word to describe this album. When I put it on, I get lost in the rhythms and the melodies, and I can turn my brain off from the real world for the duration. What has the reaction from your fans been like to the songs that are out so far?

First of all, thank you for saying that because when I hear people say that especially people that aren’t like my mom and my friends (laughs) tell me what you just told me… I’m telling you, you can’t know how much that moves because it’s affirmation that I’ve done the right thing. I ride around listening to it to escape my own misery, which is ironic, but it makes me so happy to know that’s what it does. I’ve been getting a lot of good feedback. I think that people who are familiar with me at all, know that I love all kinds of music. I’ve done collaborations with The Racontuers, me and Brendan Benson have a whole thing and we’ll do a record we’ll put out one day. I feel like I’ve always floated around doing different kinds of music, not this drastically different, but I think that people who understand my artistry understand that I’m not just one thing. I don’t think anybody’s just one thing and if they are, they’re probably bored. I also realize that that’s not everybody’s thing and not everybody’s thing is just traditional country either. I understand that some people aren’t going to want to ride around listening to it, because that’s not what they dig, and that’s totally fine, but I still have zero doubt that what I did was right. It’s what I was supposed to do. I’m seeing all of these way more positive than negative things. It feels really good to know that I’ve stirred that up in somebody else as well.

You mentioned earlier that embracing joy was something you’d never really done before. Was it hard to tap into that for this album or did that present any challenges?

No, that came naturally. Every song except ‘The New Me’ was my vocal on the day I wrote it with the track guy, songwriter, and producer, and all of them were the co-writers on the songs as well. Everybody would line everything up, get everything right and send it over to Gena Johnson, who mixed this record and helped me. We dug in. I have never seen so many buttons and knobs and things. I would tell her, I want it to be mixed around people. I had a very clear (vision) and it kind of made me want to be a producer, and I probably could be really. Once they got over to Gena, it her and hunkering down on the songs and figuring them out. For ‘Groove’, for instance, I wanted there to be a bass and drum, I needed there to be strings so we tracked that at Gena’s house. I think that it was really interesting and different for me to be so involved in the mixing of a record. I was even like, ‘hey, I want that low harmony on this one part. I want that whole step up and put that button on it and see what that does’. Or I’d get my synthesizer out and play that on ‘The New Me’.

Two days before mastering I called Gena and was like, ‘hey, I’m gonna have come over there and do some heavy breaths on ‘Groove’ and ‘Siren’ and I’m glad I did. I love that part. I just kept really listening with intention and making sure everything every little part was exactly how I was hearing it and Gena and I really honed in on that. I’ve had Vince Gill and Dave Cobb as my producers and they’d play me something and I’d be like, ‘heck yeah, it’s awesome’. Sometimes I’d be want the vocal up, like all artists do, but I wasn’t sitting in there that meticulously going through my songs. This is a whole different sound. It was fun and different for me. I wouldn’t say it was hard, but it was a good learning experience. I want to do more of it.

When I first listened to this record ‘Siren’ caught me so off-guard because it’s just not what I was expecting. Then the album flows so effortlessly and naturally. How much intention did you put into the sequencing?

I did put intention into the sequencing. I had always had ‘Siren’ first because I wanted something alluring and I wanted to catch people off-guard. By the end of it I wanted it you to feel like you’d entered this realm. I moved ‘Drive’ on up and ‘Gold’ on up. That was really the only things that I switched to make sure that I had those up at the top. I felt like I definitely wanted it to end with ‘The New Me’ as well.

Ashley Monroe’s album ‘Rosegold’ will be released on Friday 30th April 2021 via Mountainrose Sparrow and Thirty Tigers. Watch the video for ‘Drive’ below:

In this article:Ashley Monroe, Featured, The Pistol Annies