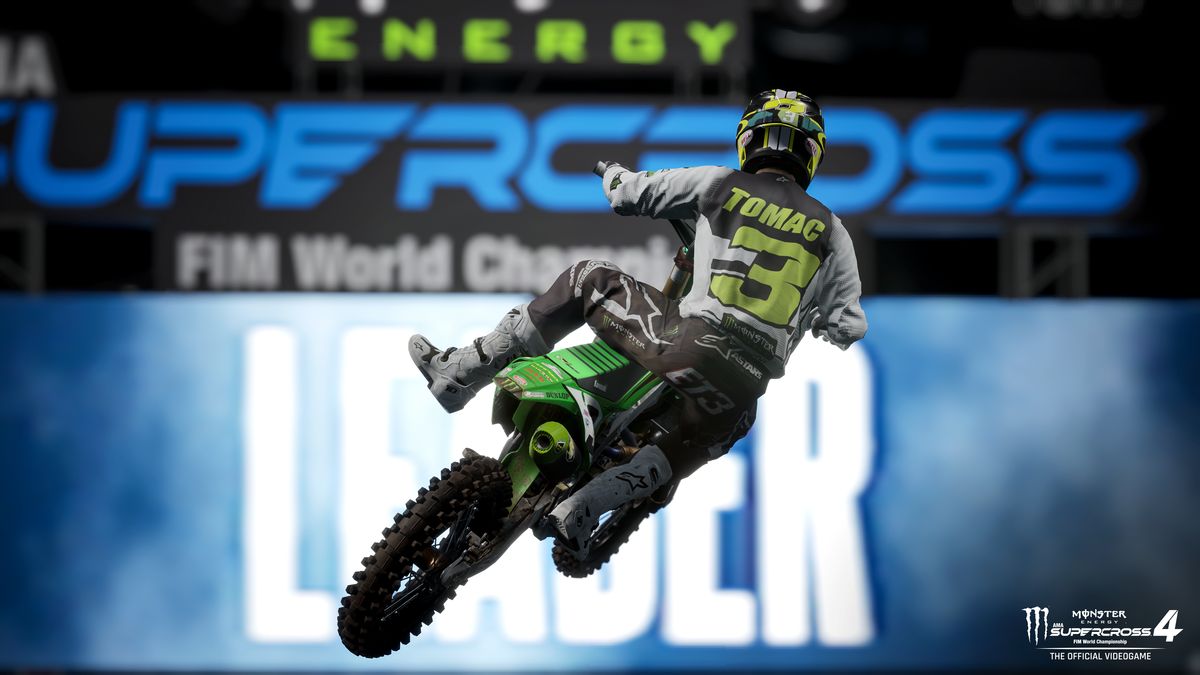 Racing games have never been quite my go-to genre. On occasion, racing games grab my attention, be it Need For Speed: Underground 2, Forza Horizon 4, FlatOut 2, to name a few. When Monster Energy: Supercross 4 landed on my lap, I was met with a bit of excitement, I’d never touched this series or its specific racing style before, let’s see how it did.

As expected there’s no plot in Supercross 4. You create a character, pick their country of origin and surprise surprise, you’re striving to be the best. Nobody expects a story from a racing game, so the omission of one is absolutely fine.

The crux of the racing is pretty simple, make some jumps and corners in short tracks that are covered in mud. I can certainly get behind that, but Supercross 4 places its feet firmly in the realistic boots as opposed to more arcadey affairs like NFS or Forza Horizon. As I said, each race is made up of a pretty small lap, with plenty of jumps, turns and muddy terrain. To take advantage of this, you need to master shifting your weight.

As you hit a ramp, you lean back to get air and then edge your weight forward as you head toward the ground. Lean too far back and you’ll smash the back of your skull into the mud and lean too far forward and you’ll finally learn what that mud tastes like. Hit a corner too fast and you’re gonna slide right off your bike and don’t even think about touching a barrier at the edge of a track, because guess what? Yes, you’re off your bike. As a beginner, even with the easier difficulties, I found out this game isn’t here to hold your hand. This is the 4th game and it’s standing its ground. While I certainly respect that, as a newcomer, the learning curve makes it hard to enjoy the game. A rewind feature is available to fix errors, but it’s limited to 3 uses.

The game starts by directing you towards the training levels, these serve as a tutorial but don’t do the best job explaining systems to newcomers, they seem like refreshers for seasoned veterans. Completing these gives you improvements to your character, this isn’t exactly an RPG but it’s nice to see your character evolve a little bit throughout their career.

Speaking of the career mode, I mean, what did you expect? It’s simple and very menu-driven, it works but it feels somewhat soulless. It makes me think of Need For Speed: Pro Street. In that game, you were at a race day event and the menu showcased your vehicle and characters would walk around it and there would be things going on in the background and there was even an announcer that commented on your position in the competition. To have a simple and silent menu is fine, but I feel like there could have been a little more done. As expected you earn different customisation options, bikes and parts as you progress. It may be simple, but it works.

To break up the formula, there is an explorable hub with its own set of collectables and jumps to master. It’s not exactly deep, but it’s a worthy inclusion and you can even free ride in co-op. At the heart of any great racer is a track editor and Supercross 4 has a pretty solid one. Given time, there are going to be some crazy tracks out there to play. Rounding out the gameplay is multiplayer. While I didn’t get time to test it, it’s there for those die-hard fans who want to test their skill.

The PS5 version has a nice crispness to its visuals, despite it having rough character models. Tracks nail the depth of mud textures and the bikes look great. The use of HDR is surprisingly good and the game holds 60fps almost flawlessly. The soundtrack is fun enough, want heavy guitar riffs with finger tapping solos? You got them. As a technical package, it certainly gets the job done.

Reaching a solid verdict is quite difficult, on paper the games does everything it needs to, but as a new player, I really struggled to enjoy it. While it felt great winning races, it never felt exhilarating. Supercross 4 feels like a puzzle game and I just want to go fast. On the other hand though, that is an issue I have with that game and not a fault with the game itself, and someone who is a fan of the series is definitely going to enjoy this. If you loved the games before, this is an instant buy and if you’re looking for something a little different and more challenging, you might like this. If you’re looking for a ‘fast engine goes vroom’ game though, it’s a tougher sell. It’s by no means a bad game, but your mileage will vary.

Monster Energy Supercross 4 was reviewed using a digital code provided by the publisher.