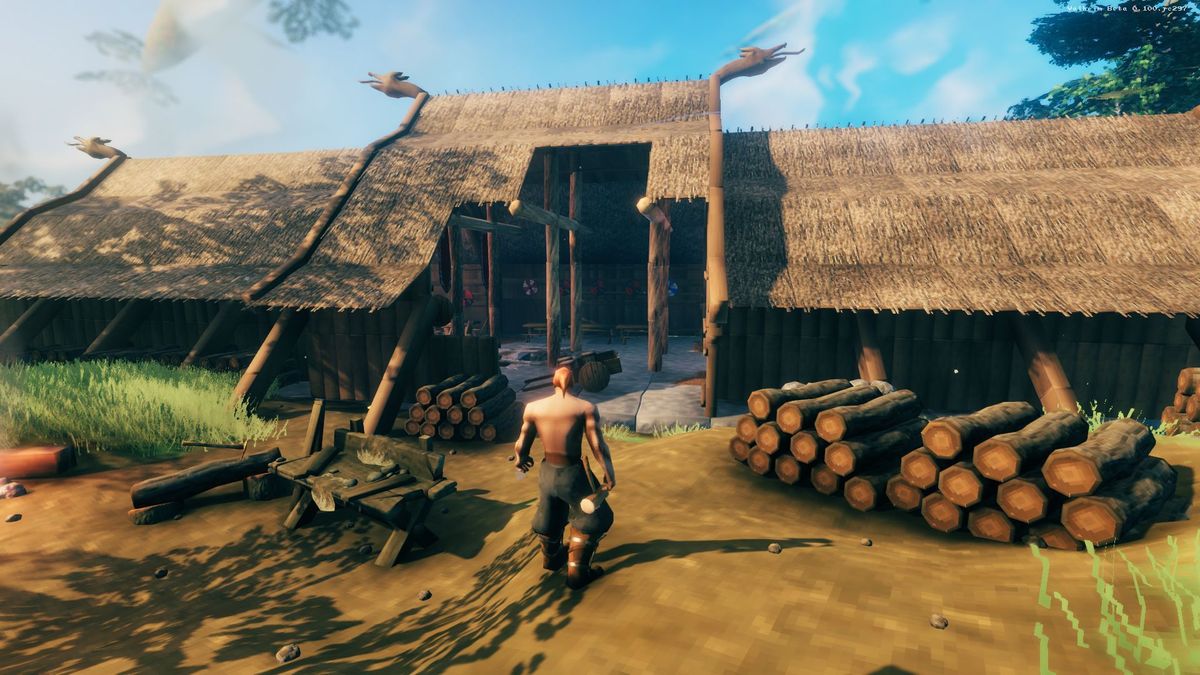 Let’s all play a game, hold up your hands and count how many open-world survival/crafting games there are on Steam. Yes, it was an unfair challenge, nobody has that many hands. Valheim is the latest survival game, in a genre that ironically kills so many titles. Does Valheim have staying power?

You play as a fallen Viking warrior who resurrects in the land of Valheim to find your eternal peace marred by demons and set out to cleanse the world.

It’s a simple premise and that’s all it needs. A few lore-stones dot the world to give a tiny bit more depth, but the story takes a very definite backseat. For a game like this, that’s absolutely fine.

Watch the Valheim trailer below:

The basic concept is the same as every one of these games. You wake up with nothing, get some wood and stone, build a little hut and hide and wonder what the hell to do next. Then day after day, you slowly venture out of your hovel and after several hours, wonder if there was any point. That’s the fun though, “I have some stuff, now what?”. Valheim gives you the task of killing bosses and after a couple of days travelling, you’ll quickly find out, this map is huge. When I said it’s huge, I’m underselling it and its vastness is split into several biomes, each with a boss. Each biome has a unique exploration twist like extreme cold or poison, so now the game evolves into ‘I need to create equipment to even find the boss, let alone fight it’.

The simplicity of the gameplay loop is aided by its crafting system, pick up an item and learn a bunch of associated recipes. The more you craft, the more you learn and this applies to skills, the more you use an axe, the better you get with it and so forth. This alone makes Valheim incredibly accessible, there’s no hunting for diagrams and assigning skill points (as of yet). This allows Valheim to focus on crafting, a system that works excellently. Once you have a hammer, you can create a workbench and once that is activated a building zone is established. At this point you can do pretty much anything, build structures, weapons, armour… you name it! As a little bonus, all equipment can be repaired for free and destroying builds returns all materials to you (at least for now). Once you have a little base and some equipment, you’ll realise you haven’t starved to death yet.

Valheim has a strange food system, there isn’t a hunger meter but you’ll need to eat food to heal. You can only eat a limited amount at once and it heals you over time. With food in your belly, it’s time to take on the boss, when you find its spawn. Which, of course, is only the first step. Each boss spawn requires a sacrifice that gets progressively more difficult to locate and this is where Valheim pulls its ‘a-ha!’ moment out. There is a staggering amount of preparation needed to beat a boss in Valheim and this is where the difficulty stems from. Like a Souls game, when you die you need to recover the items you lost, which could mean a long and difficult journey back…..which in turn requires plenty of bases being built in the world. This is an awesome time sink.

Playing alone is viable, but multiplayer is the way to go. Currently, 10 players can inhabit a world and when you have a full server, with everyone pulling their weight, Valheim is an absolute blast. I love that your created characters can be used in as many servers as you want and all their inventory comes with them too!

The game looks quite nice too, there is solid wind simulation on trees, water caustics and nice lighting. The game uses an almost voxel style, but viewed from a distance, looks fully 3D. The soundtrack is simple but effective. Overall for a game of this style, it’s a pleasant looking one.

Valheim hits a really good balance between being very newbie-friendly, with simple levelling, simple crafting and building but also has deeper systems like wood rotting in the rain and unvented buildings getting built up with smoke, not to mention some of the bosses are bloody tough. For a game in early access, it’s a great start and with an increase in server population and more quests added, Valheim has a lot of room to grow. There’s not much more to say this early in development, but if a cynic like me is having fun, it must be pretty decent right?

If you’re new to the world of Valheim be sure to check out our guide on getting the best start in the game.