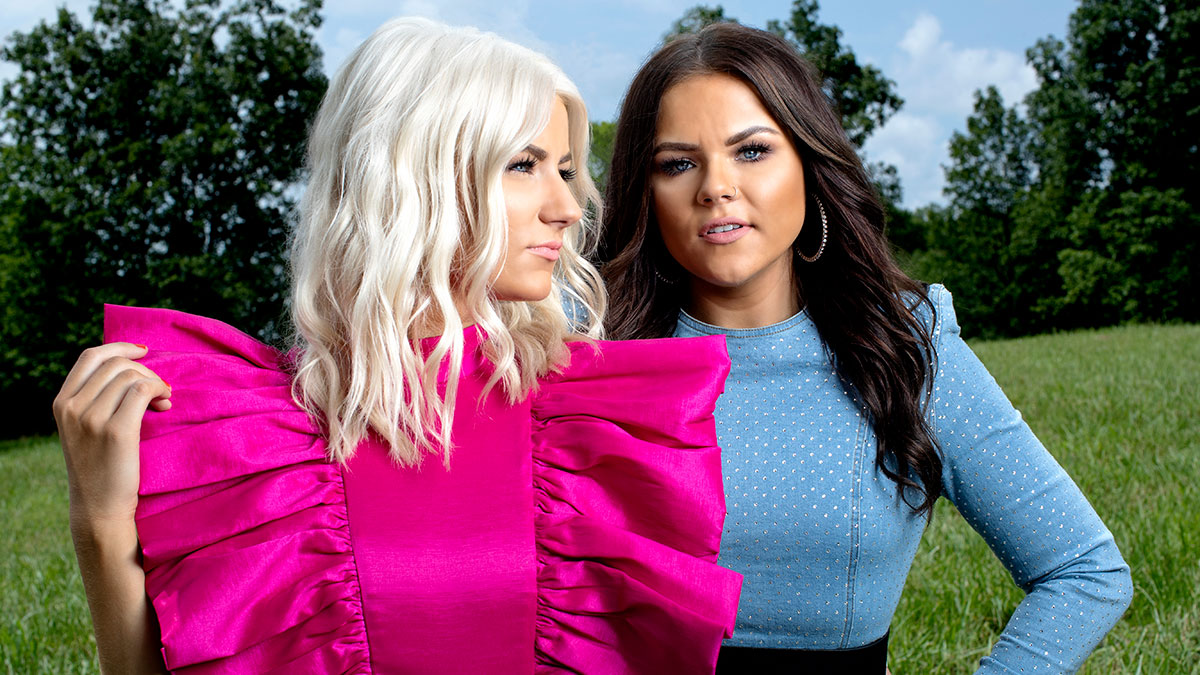 Walker County – sisters Ivy Dene and Sophie Dawn – are signed to Warner Music Nashville and spent much of the past year releasing singles as they build up their fan base.

Their most recent release, ‘Bits and Pieces’, was written by Sam Hunt and it’s definitely helping to turn heads in the genre. With more new music planned for the year, Walker County is definitely a band worth keeping an eye on.

I spoke with Ivy and Sophie recently to find out about the new single, discuss their plans for music this year, and to get tips on how to master TikTok…

Your single ‘Bits and Pieces’, is a really fun, catchy, upbeat track. Tell me the story behind it…

Ivy: This is really cool because it was actually written by Sam Hunt. We first heard the demo with him on it and he was singing it. Sophie and I fell in love with his version of it. We would drive around in the car and be rolling the windows down singing along to it, and we just immediately thought it was such a great song and wanted to put our spin on it. I think it was cool having a male song and switching it to female, and giving it our perspective was really fun. I don’t think we had a song like that in the mix yet so when we heard it, we were like, ‘we need this lighthearted, fun, party song. We didn’t have one of those yet so it really spoke to us. We hope everybody has fun listening to it.

Is this song leading up to an EP or an album at some point this year?

Sophie: Yeah, we have four songs out right now. The end goal is to release an EP but right now we’re just focusing on ‘Bits and Pieces’ as a single and we’re going to push that to radio eventually, and just see what it does and if it takes off and resonates with people. The end goal is an EP but that’s down in the future a little bit. We’re just so excited to have music out for people to listen to.

You released a few songs last year. How challenging was it to do that during a pandemic?

Ivy: It was kind of crazy because we recorded all these songs when the pandemic was not happening and quarantine was not a thing. We were planning on releasing these and going on tour, and getting to play shows as we release these songs and of course that didn’t happen. The label said, ‘hey, we still want to go forward with releasing these songs if you guys are okay with it? Let’s still go forward’. It was our saving grace because we were losing our minds being stuck in the house. Getting to put music out and getting to connect with an audience, even if it is over lives or streaming, in some way we’re still connecting with people. Releasing music in a pandemic was very different (laughs) and it was new, but it was our saving grace for sure.

Ivy: It’s crazy that we noticed our following started to go up because the pandemic forced us to do lives on Facebook and Instagram, something that we’ve never done before. It forced us to do this new thing where we were reaching a new audience online but we definitely miss being on the road. There’s something about being in front of people that just gives you a different feeling for sure.

How has your creativity been this past year? I know some artists have struggled and others have flourished. What’s it been like for you?

Sophie: We had a little trouble with Zoom writes but I will say we wrote some of the best songs over Zoom. While we were locked in the house, we were still able to live a life a little bit. Ivy went through a relationship so we still had normal life things going on, and we were able to really think about it and let that come out in our writes a lot more. It was a little more personal.

Ivy: We were definitely stuck in the house with our feelings. (laughs) We needed an outlet. We did writes over Zoom and that was a new experience. It is different and it’s a little harder because our internet connection goes in and out sometimes (laughs) but we did write some of our favourite songs over Zoom.

I’ve spent the last year up-skilling like my life depends on it. Have you picked up any new hobbies?

Sophie: We worked a lot on our social media.

Ivy: TikTok has been a new thing. We had to learn how to use TikTok.

Sophie: We’ve had fun with it.

Ivy: Sophie is the baker though. She’s done some baking and it’s been fun. We live in this wooded area on this dead end road so we’ve been taking walks and going running, which was fun. It’s been different, but we’re making it.

I’ve tried to get into TikTok and I’ve not managed yet. What tips can you share?

Sophie: One tip is that it’s going to be the most random video that takes off. (laughs)

Ivy: We always laugh because we can’t figure out the algorithm of it at all. We’re like, ‘oh, maybe this video of us singing will do good’ and then it’ll get 300 views. I did a video of me putting in my hair extensions and that got 500,000 views. I was like, ‘oh, of course, it’s random one that I put zero effort in that does really well’. (laughs) I think there’s no rhyme or reason.

Sophie: You’ve got to be consistent.

When life gets back to normal, hopefully at some point this year, do you want to come over to the UK and play for us?

Sophie: We’ve always dreamed of coming to the UK.

Ivy: We never have been over there.

When was the moment your realised that you wanted to be a band and make music together?

Ivy: Sophie and I are three years apart. I was the classic big sister who was always singing and a big showboat over here (laughs). Our Dad was obsessed with music in the house and he was very much our teacher growing up with music. He noticed that we both had this interest to do it. When we started the band Sophie was nine and I was 12. We actually started by street performing here in Nashville, Tennessee. We’re from Indiana originally but we came down on a family vacation as young girls and Dad was like, ‘let’s just open the guitar case and street perform just to say we did it’. We street performed on Broadway. (After) he was like, ‘if you girls really love this, we could do this back home’ and so we did. We started playing anywhere they’d listen to us. We played fairs, festivals, churches, birthday parties, weddings… we’ve played it all. In high school we started taking it more seriously and thought about how could do this after school. We moved to Nashville and…

What was that move like? Was it a difficult transition?

Sophie: We were from a very small town of 390 people. Very rural.

Ivy: We grew up on our family farm.

Sophie: When we moved here, we were scared to get on the interstate. (laughs)

Ivy: It was so different. It was moving to a big city for us. It took a lot of learning but we fell in love with it. We call it home now.

What else are you hoping to achieve this year?

Ivy: The Tanya Tucker tour dates are set in September. We hope those still are on the calendar by the time that comes around. We’re super excited to get back on tour.

Sophie: We’re just hoping to reach a lot of people and make new fans and hopefully grow our little following.

Walker County’s single ‘Bits and Pieces’ is available to download and stream now. Watch the video below:

Advertisement. Scroll to continue reading.
In this article:Featured, Walker County