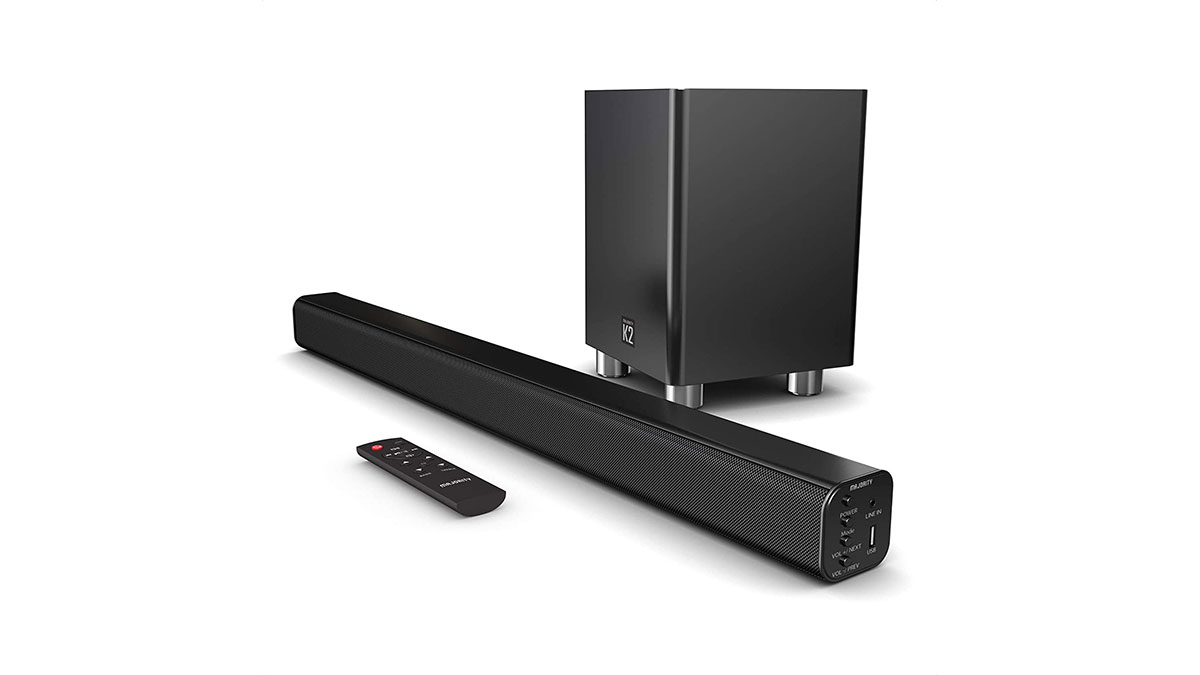 Having been on the lookout for a soundbar for a while now, I jumped at the chance to review the Majority K2 150W Soundbar when the opportunity arose. Intrigued by the low price point (it retails under £80), I believed it must be too good to be true. Even more, Majority is planting a tree in the name of every person that buys one, so not only are you getting a bargain, you’re helping out the planet too. With the population becoming ever more environmentally conscious, there’s very little to lose by trying this out is there?

After unpacking the soundbar from its box, I prepared myself for a nightmare of a time setting it up but honestly, it couldn’t be simpler. I connected the soundbar straight to my TV using the optical cable provided in the box (the device supports HDMI arc too) and plugged it in. I then plugged in the sub-woofer and turned it on. So far, so good. The soundbar and the sub-woofer connect to each other the minute they’re turned on, leaving you good to go.

Using the remote, you can cycle through the soundbar’s modes (include an FM option) to choose the right connection. There’s a Bluetooth setting too, which is very handy and I’ll come to that later. My TV is an LG Smart TV so all I needed to do was go to the settings and switch the output to ‘optical’. From that point, the soundbar has worked pretty much flawlessly. There are three sound settings that you can toggle through on the remote, so that you can choose the sound you like. I have to say, I’m impressed with just how good the quality is despite the soundbar being relatively small and, as I mentioned earlier, incredibly cheap.

I don’t consider the speakers in my LG TV to be poor but the difference made by the soundbar is very noticeable. No longer am I having to switch the sound up and down so as not to annoy the neighbours when loud music arrives during a film or an action sequence rockets the sound to deafening. The soundbar takes care of all of that, meaning you can enjoy an interference free movie or TV watching experience.

I tried out the Bluetooth option to connect the soundbar to my Bluetooth record player. Like the set-up with the TV, it was incredibly simply and the two paired within seconds. The sound is vastly better than playing records through my TV and it creates a really rich, room-filling sound that is incredibly impressive. The only issue I experienced with the Bluetooth connectivity is that if you leave it a while between changing records, for some reason the sound clicks in and out. It’s a little annoying but easily fixed by switching the soundbar off and repairing it with the record player.

It really is hard to find too much to fault with the Majority K2 150W Soundbar. If you’re after the highest quality audio you can find, this won’t be the device for you. For the majority of people, it will be a huge improvement over their TV speakers and that should be satisfying enough. For me, this soundbar does what I wanted a soundbar to do – it improves the audio quality of TV and movies, and my records sound great through it. Add to that the easy setup and the very affordable price, and the Majority K2 150W Soundbar is a real winner.