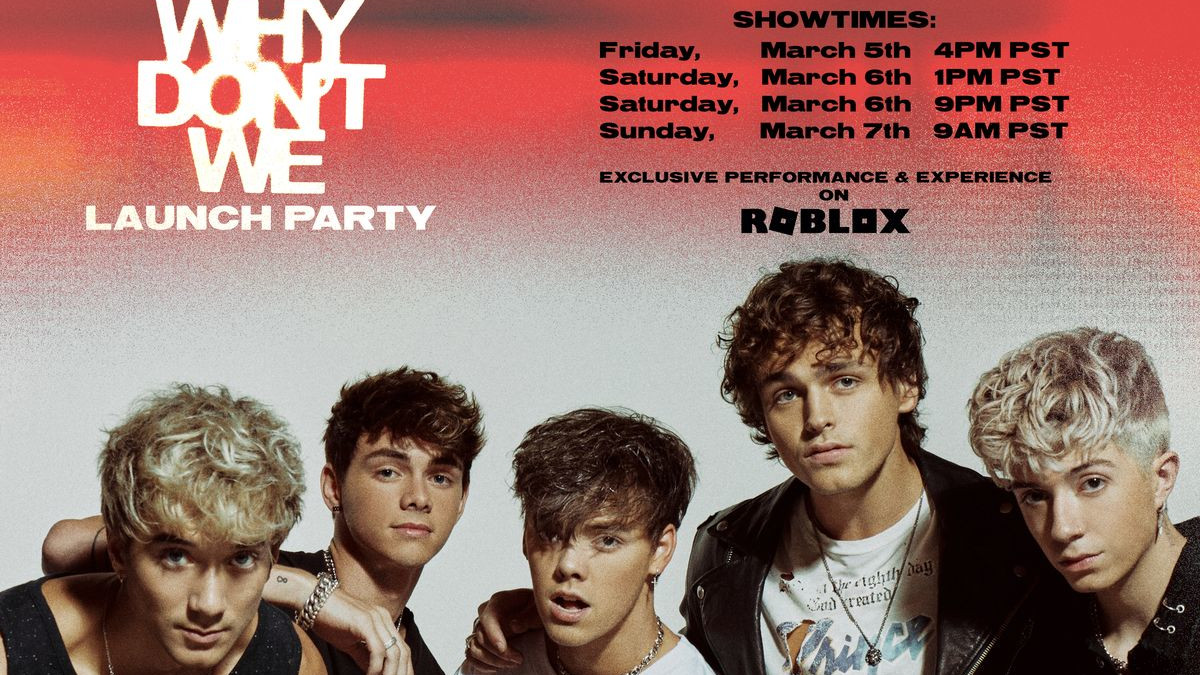 Why Don’t We, announced today the band’s first Launch Party on the Roblox platform to celebrate their recently released sophomore album, ‘The Good Times and the Bad Ones’. The Launch Party on Roblox will take place on Friday, 5th March at 4 pm PST. Three additional performances are scheduled throughout the weekend to give the global Roblox community an opportunity to enjoy this exclusive show.

Why Don’t We released ‘The Good Times and the Bad Ones’ earlier this year and earned their highest debut on the Billboard 200 at number 3 and their first number 1 album on the album sales chart. The album features smash single “Fallin’ (Adrenaline),” which has amassed over 142 million global streams and over 26 million video views since release.

Watch the launch party trailer below:

“Having spent so many hours on Roblox, it’s awesome that we get to connect with our fans in this community we know so well,” said Zach Herron of Why Don’t We. “While we’ve missed being on tour and interacting with our fans all over the world, being able to connect in this way is bringing fandom to a whole new level. Literally anyone can join the party, no matter where they are, so we’re excited to see everyone this weekend on Roblox.”

“Ultimately our goal is to champion the artists, and Roblox helps us do that by giving them an opportunity to connect with fans and promote their music in new ways,” said Paul Sinclair, General Manager & EVP, Atlantic Records. “Why Don’t We are crazy talented, and we want to get their music heard by as many fans as possible. With their huge online/social media presence and Roblox’s popularity among their key audience, this partnership is a no-brainer.”

“At its roots music is a form of communication, a way to connect people, and something artists have missed this past year due to the pandemic,” said Jon Vlassopulos, Vice President and Global Head of Music for Roblox. “We are focused on creating these types of immersive, rich experiences in the Roblox Metaverse and are excited to bring the Roblox community the chance to connect with Why Don’t We and enjoy this exclusive show together with friends.”

For more information, including how to attend the launch party, head over to the official Roblox page.

Advertisement. Scroll to continue reading.
In this article:Atlantic Records, Roblox, Why Don't We