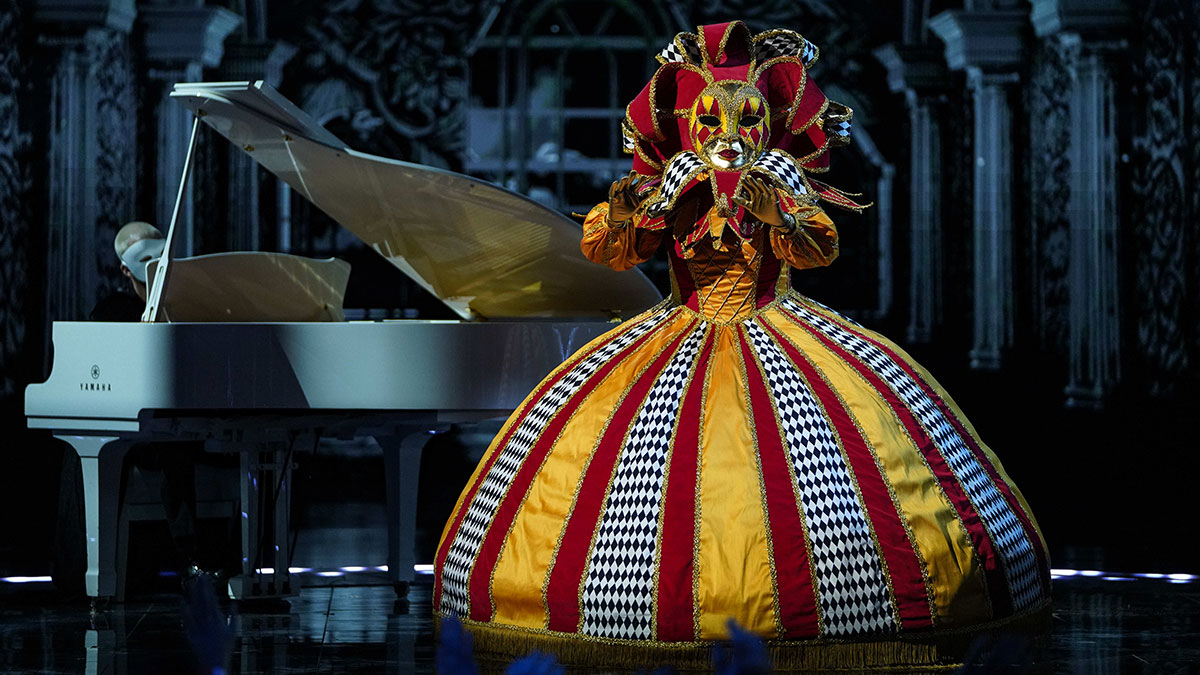 ‘The Masked Singer UK’ continued last night and there was a double unmasking over the course of the episode.

With 7 singers still in the competition, the panel – Mo Gilligan, Davina McCall, Rita Ora and Jonathan Ross – were joined by Alan Carr as their guesses veered from spot on to completely unrealistic. How Joel Dommet keeps a straight face, I’ll never know.

I’ve rounded up all of this week’s new clues and updated my guesses. Find out my thoughts by reading on…

The clues: Dragon says he loves to gas and was seen looking at plenty of food. He suggested he had a big appetite for food and learning, as well as books. Dragon suggested he’d been on ‘I’m a Celebrity’ too by listing out some gross things he’d eaten. He was also seen being interviewed next to a microphone.

Previous clues: Dragon is sticking with the faux US accent and he said he loved to play a bit of a rebel. He said there was destiny in him becoming a dragon. We saw a pink iPod and Dragon said he’d taken some perilous journeys. Dragon said his latest adventure led him back to the stage. Dragon said he lit up the stage with his last performance. He said he was brave or silly and would do anything for a dare. Dragon said he found being on stage scary but he found a boyfriend by doing it. He also said it the costume helped hide his big belly. Dragon sounded American and said he wanted to be loved. He kicked a doll house that revealed money. Dragon also said ‘deal’ and ‘drag on’. He also said he had a fiery temper.

Our guess: Courtney Act. The clues this week didn’t really work for Courtney but I still think that’s who it is.

The clues: Harlequin said she didn’t think it was a man’s world but she began her career in a man’s suit. She’s stood shoulder-to-shoulder with dignitaries and chatted to world leaders. Harlequin once met a prince and she’s been to many places. She was also seen dropping a fan.

Harlequin said she wasn’t a fool but she liked to joke. She said she’d have to be pushed on stage and likened being on the show to doing karaoke, which she said was new for her. Harlequin once played a male lead in a musical.

Our guess: Gabrielle. There’s no way this is anyone else. The reference to the man’s suit links to the video for ‘Dreams’.

The clues: Robin said he’d not always been bright and confident. He said he was preyed upon for being different and uses his voice to inspire birds like him. Robin made a reference to diversity and helping people change their lives.We also saw Robin being screamed at by a crowd of girls.

Previous clues: Robin said he was here for the long run and made a reference to ‘the luck of the Irish’. Robin said he’s been all over the world but some locations are not for him. He doesn’t want to waste time not doing the things he loves and that the simple things in life taste the sweetest. Robin said that sport has always been a part of his life and he was a footballer. He said he’s represented his country on the pitch and played alongside some real legends.

Our guess: Aston Merrygold from JLS. This is another contestant I’m very sure of. I recognise the voice and Aston is a very good performer.

The clues: Badger said he was used to be in sets and he’s used to more than one kind of studio. He’s won lots of awards/medals and was seen Googling for hats. We also saw a fan letter from someone called Barbra.

Previous clues: Badger said that he was very homely and from a big family. He said he was one of a kind and all of his family were creative with his mother opening him up to his gift. Badger said there wasn’t even room for a mouse in his house. Badger said the panel would have to get up extra early to catch him. He said he was shy around girls, especially when he was younger.  At school he wrote poems about girls but was too shy to show them. Badger kept his talent hidden from his friends but his talent blossomed when he showed his friends. Badger has been used to being anonymous in his career. He said he could have been surrounded by people but no one would know who he was. Badger said he was going to try and claw his way to victory. He also said he saw things as a virtual world.

Our guess: Kevin Clifton. I’m still not sure but Kevin has won ‘Strictly Come Dancing’ so that works with the medals/awards.

The clues: Sausage was seen in Blackpool and she talked about travelling to see lots of different places. She said she doesn’t need luxury and is happy to sleep in a camper van. Travelling makes her feel young at heart. We also saw candles and hippy style items in Sausage’s dressing room.

Previous clues: Sausage said she was shaking in her boots during her last performance. She said someone once said she looked like a horse. Sausage enjoys hiding her face and said it’s not the first time she’s hidden her face in her work. Sausage said she can be gourmet or no-nonsense, she considers herself the latter. She loves the simple life and was seen carrying a glittery tool box. Sausage is often seen doing DIY.

Our guess: Joss Stone. I’m pretty sure on this one now and that’s all I can hear when Sausage sings.