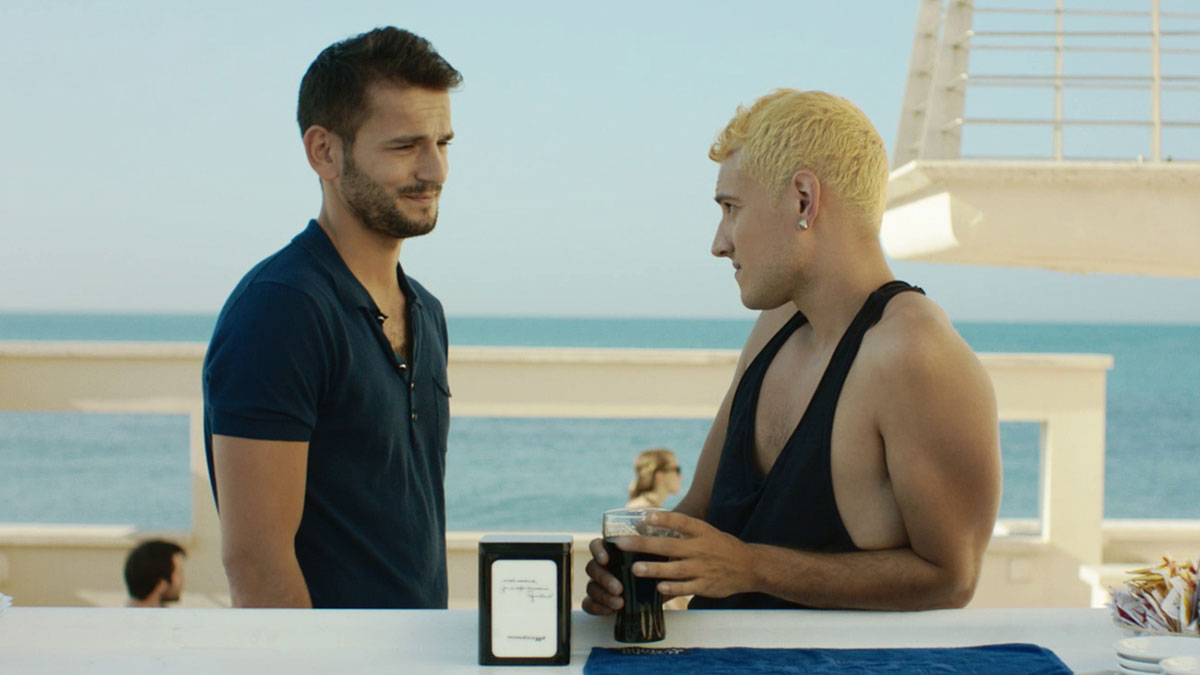 NQV Media is back with the latest instalment of its popular ‘The Male Gaze’ series. The latest title, ‘Hide and Seek’, collects together five shorts from across the globe, with the theme of men hiding who they truly are. From children beginning to understand their sexuality through to married men hiding their true nature, ‘Hide and Seek’ is an engaging and insightful watch.

Opening with Leandro Goddinho and Paulo Menezes’ ‘Lolo’, the collection throws us into the world of openly gay 11-year-old Lolo (Zev Starrett). He wants to go public with his boyfriend Max (Valentin von Schönburg), and is dismayed when he’s told he’s ‘too gay’. Turning to his friends Elena (Rhea C. Tober) and Toby (Sam Atlas), Lolo questions what being ‘too gay’ means as he formulates his identity. It’s a vibrant start to the collection and is a glimpse at just how much further on kids are these days than they were back in my day.

Lorenzo Caproni’s dark drama ‘The Den’ follows and things take quite the turn. On a beach holiday with his wife and son, Christian (Daniele Mariani) encounters Luca (Emanuel Caserio), a man from his past. Luca gives Christian the address of where he’s staying and the two men meet up. What you think is going to be consensual fling, transforms into sadomasochism that blurs the lines of consent and asks more questions than it answers. Luca is tied up and degraded, while Christian flits between his family and his secret. It’s dark stuff and one of the strongest moments here.

Paulo Roberto’s ‘Stanley’, for me, is one of the weaker shorts here. With not much of a narrative, it’s a loose story of two men that meet a woman in a roadside nightclub before making their way down to the lakeside to have sex. This one left me a little cold and while visually it was well made, I didn’t find much to enjoy here. Much better is David Benedek’s ‘If Only You Were Mine’, a story of true love between a young man with an eating disorder and an older man who may, or may not, be having multiple relationships. It captures the uncertainties of first love and the differing expectations too people can have from the same relationship.

The collection comes to an end with ‘No Strings’ from Irish film-maker Eoin Maher. Reclusive Welsh man Bryn (Richard Hay) hooks up with Irish man Sean (Richard Hay) via a dating app. Jaded by his life and his move to London, Bryn is dismayed when Sean asks to stay the night after finding himself stranded. Reluctantly agreeing, Bryn is forced to deal with his issues as Sean tries to get him to come out of his shell. It’s a strong end to ‘Hide and Seek’ and deals with intimacy as well as identity issues for young gay men.

‘The Male Gaze: Hide and Seek’ keeps up the consistency of the series. With the exception of ‘Stanley’, it’s a strong collection that once again shows the many different sides to live as a gay man. If you’ve loved the collection so far, I highly recommend you seek this one out and kick back for 92 minutes to take your mind off the eternal lockdown we find ourselves in.