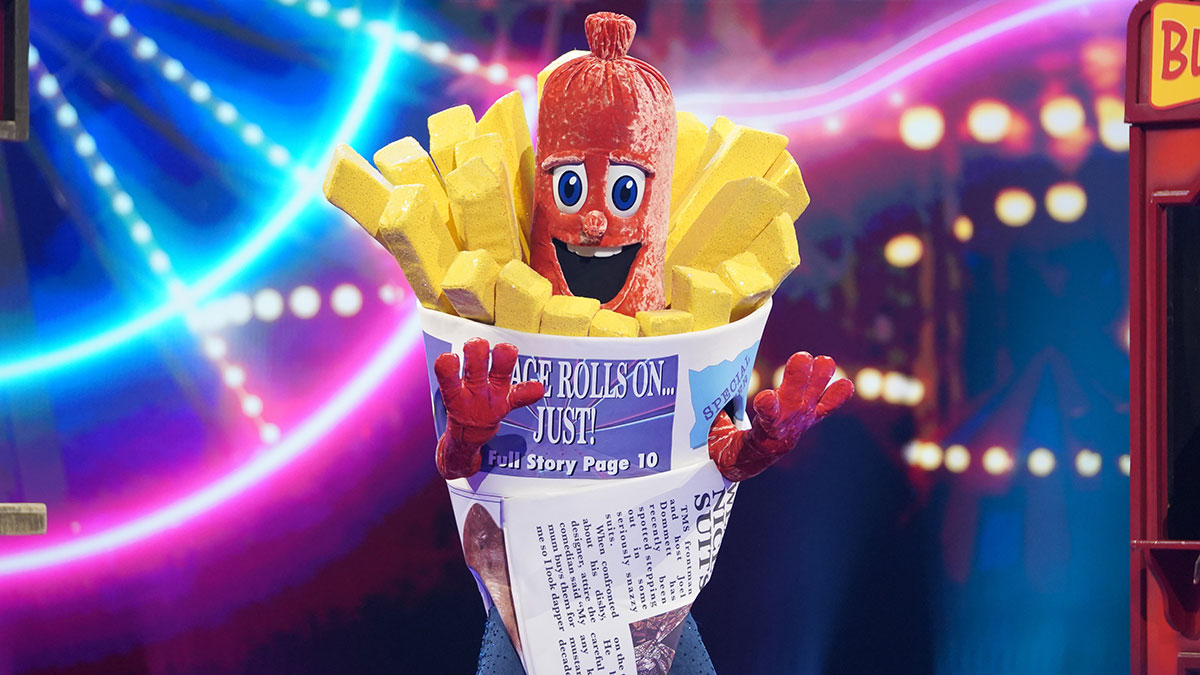 ‘The Masked Singer UK’ continued last night as all of the remaining contestants performed on stage.

At the end of the show, another contestant was unmasked but before the show reached that point, there were plenty of clues being thrown about. I’m a little bit firmer on some of the contestants and still a little stuck on others.

I’ve rounded up all the clues from the latest episode and revealed my latest guesses. Keep reading to find out my thoughts…

The clues: Blob said if you don’t stand for something, you fall for everything. He added that he stands up for what he believes in and that laughter does wonderful things. Blob learned making people laugh can do wonderful things and making himself the punchline can win over the toughest crowd. He wants to put a smile on people’s faces.

Previous clues: Blob said he’s a bit of an academic but the panel hadn’t got their guesses right yet. He’s duetted with some amazing artists as a musician and once played for a top political journalist. Blob has worked with George Michael’s producer and he’s written songs too.

Blob was seen in a school and said it’s not the first time he’s been called four eyes. He said he was loud and bright, and that he wanted to be James Bond or Batman as a kid. Blob ended his clue package saying he wanted to make a good first impression. After his last performance he said he recorded a demo for Simon Cowell.

Our guess: Lenny Henry. If this isn’t Lenny Henry, I’m going to eat my hat.

The clues: Sausage said she was shaking in her boots during her last performance. She said someone once said she looked like a horse. Sausage enjoys hiding her face and said it’s not the first time she’s hidden her face in her work.

Previous clues: Sausage said she can be gourmet or no-nonsense, she considers herself the latter. She loves the simple life and was seen carrying a glittery tool box. Sausage is often seen doing DIY.

Our guess: Joss Stone. I’ve been through a few names for Sausage but since someone suggested Joss to me, I can’t help but hear her voice. She was called a horse in an episode of ‘The Tudors’.

The clues: Viking said the odds were in his favourand more than a billion people watched him. He pointed at a map that had ‘Spandau Falls’ and ‘A1 Road’ on it. Viking said he would strike out on his next adventure.

Previous clues: Viking said he emerged victorious from his last battle. He lives by his instincts and he’s left footprints in countries outside of his own. Viking breaks the rules and said success can be found when he breaks something.

Viking said he was curious and an explorer that forged his own way. He said he discovered answers and was looking for a voice. Viking also kept emphasising the ‘king’ part of his name. After his last performance he said he wears another kind of armour.

Our guess: Ricky Wilson. The Kaiser Chiefs frontman definitely fits many of the clues we’ve had so far. I’d previously said James Blunt but after this performance, I don’t think it sounds like him.

The clues: Badger said that he was very homely and from a big family. He said he was one of a kind and all of his family were creative with his mother opening him up to his gift. Badger said there wasn’t even room for a mouse in his house.

Previous clues: Badger said the panel would have to get up extra early to catch him. He said he was shy around girls, especially when he was younger.  At school he wrote poems about girls but was too shy to show them. Badger kept his talent hidden from his friends but his talent blossomed when he showed his friends.

Badger has been used to being anonymous in his career. He said he could have been surrounded by people but no one would know who he was. Badger said he was going to try and claw his way to victory. He also said he saw things as a virtual world.

Our guess: Kevin Clifton. I’m really unsure on this one now. Kevin isn’t from a large family as he only has one sister and his whole family are dancers, which would mean he wasn’t one of a kind. I’ve seen speculation that it’s Ne-Yo but I doubt he’d be on the show although he does have a song called ‘Because of You’ (and he sang Kelly Clarkson’s ‘Because of You’).

The clues: Dragon is sticking with the faux US accent and he said he loved to play a bit of a rebel. He said there was destiny in him becoming a dragon. We saw a pink iPod and Dragon said he’d taken some perilous journeys. Dragon said his latest adventure led him back to the stage.

Previous clues: Dragon said he lit up the stage with his last performance. He said he was brave or silly and would do anything for a dare. Dragon said he found being on stage scary but he found a boyfriend by doing it. He also said it the costume helped hide his big belly.

Dragon sounded American and said he wanted to be loved. He kicked a doll house that revealed money. Dragon also said ‘deal’ and ‘drag on’. He also said he had a fiery temper.

Our guess: Courtney Act. To my ears it sounds just like Courtney. The performer and stage clues support this and I still think that US accent is fake. Courtney was a contestant on ‘Australian Idol’ too so I know she can sing.

The clues: Harlequin said she was still managing to fool the panel. She said it’s not the first time in her life she’s cleaned up as we saw her cleaning trophies. Harlequin loves being at home rather than out partying. She likes festivals and said she was ready to show her true colours.

Previous clues: Harlequin said her last performance was scary but a lot of fun. She said she was fascinated by stories and loved to read, especially horror stories. Harlequin likes to tell stories of her own and her stories have been heard all around the world. It’s time for a new chapter.

Harlequin said she wasn’t a fool but she liked to joke. She said she’d have to be pushed on stage and likened being on the show to doing karaoke, which she said was new for her. Harlequin once played a male lead in a musical.

Our guess: Gabrielle. This is the singer I’m most confident on and I’m 100% sure it’s her.

The clues: Robin said he was here for the long run and made a reference to ‘the luck of the Irish’. Robin said he’s been all over the world but some locations are not for him. He doesn’t want to waste time not doing the things he loves and that the simple things in life taste the sweetest.

Previous clues: Robin said that sport has always been a part of his life and he was a footballer. He said he’s represented his country on the pitch and played alongside some real legends.

Our guess: Aston Merrygold from JLS. This is another contestant I’m very sure of. I recognise the voice and Aston is a very good performer.

Bush Baby was unmasked at the end of the episode and revealed to be ‘Cold Feet’ star John Thomson.