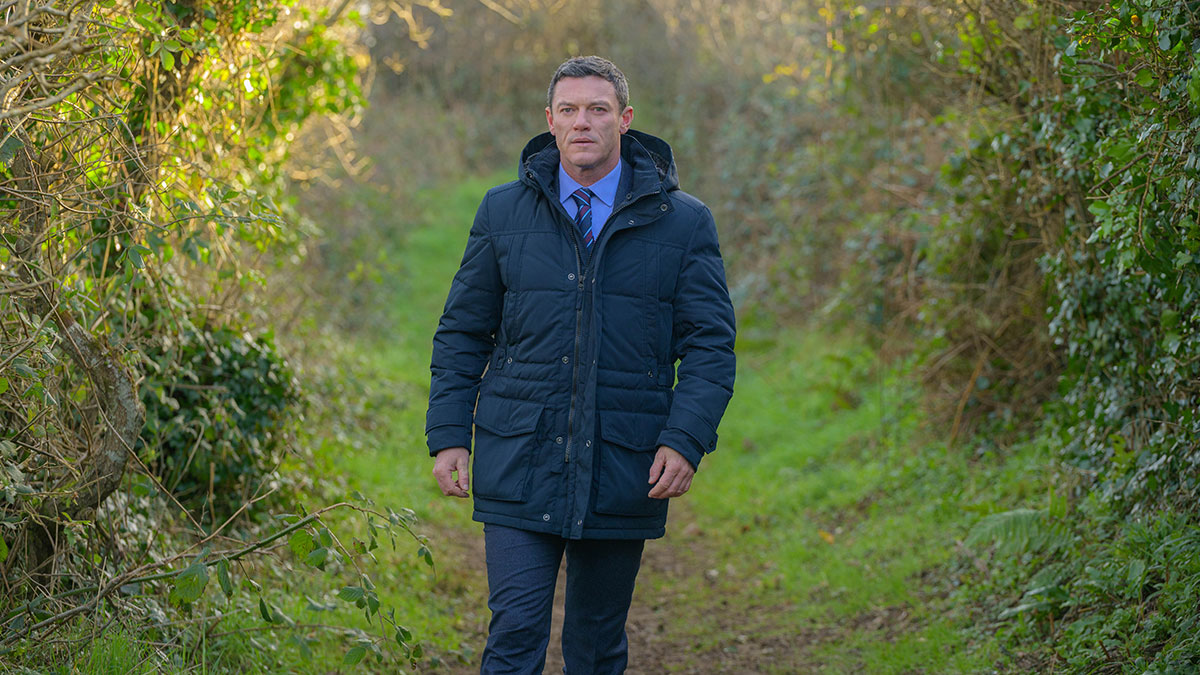 ITV’s three-part series ‘The Pembrokeshire Murders’ starring Luke Evans began tonight and the story will unfold over the next two evenings.

The first episode opened with Detective Superintendent Steve Wilkins ironing, drying some washing up and leaving his home to head to work. Whilst driving, Steve called his son Jack (Steffan Cennydd) and asked if he could come to watch him play football. Despite being asked not to attend, Steve promised he would be there.

As he arrived to work, Steve noticed a TV crew filming and he asked his colleagues why they were there. The answer he received dismissed them. Steve received a call from his ex-wife asking him to make sure he turns up for their son’s football game. After the game, Steve spoke to Jack about staying over at his and then suggested he spends a week living with his mum, then a week living with him. Jack asked for time to think about it before embracing his father and walking off.

Home alone, Steve made himself a microwave meal and his attention was caught by a report on the TV about the murders of Peter and Gwenda Dixon, whose killer was never caught.  Back at work Steve asked for permission to look into the cold case and then went to speak to a police officer who had worked the case to get information. Steve discussed the evidence that suggested a man named John William Cooper (Keith Allen) had killed the couple.

Steve went to investigate where the murders took place to see if he could find anything. He saw a plaque dedicated to the murdered couple but his trip didn’t unearth any new evidence.

Steve’s next stop was to the evidence locker for the case against Cooper. He learned more about Cooper’s criminal past and found out he was a suspect in an arson/murder case.

In the first part of the episode we also saw Andrew Cooper (Oliver Ryan) struggling on crutches and falling. In his apartment he guzzled pills and was later seen calling someone to complain about the delayed payment of his disability benefit.

Back home Steve was looking through evidence when his daughter Amy (Mabli Jên Eustace) arrived to do some washing. He offered her something to eat and she told him she had to get to the cinema, but before she left she told her father that Jack was glad he had returned. After Amy left, Steve turned his attention to the evidence again and he took interest in the weapons Cooper had used in his crimes.

Taking his theory to the station, Steve shared what he’d found and he showed a video of Cooper’s interrogation. He then told his colleagues that he believed Cooper to be guilty of three crimes, including the unsolved murder. Steve then presented the evidence to his superiors and explained his theory, highlighting how analysing evidence had progressed since the case was first investigated. His pitch was met with reluctance but he was backed up by DI Ella Richards (Alexandria Riley) and DCS Coles (Rhodri Evans).

Cooper was visited in prison by his wife Pat (Caroline Berry) and he disparaged the way she looked and dressed. She mentioned Andrew and Cooper replied that he’s dead to them. We then saw Andrew in rehab and he has a nasty scar down his spine.

Steve took Richards to Cooper’s last-known home and they went over all of the crimes that had gone unsolved in the vicinity. They then moved on to the Nolton Estate and discussed their plan of action before the talk turned to the breakdown of Steve’s marriage. Getting out of the car, Steve and Richards looked at the scene where Cooper had attacked five teenagers. They swigged from a whiskey flask and cheers’d to Operation Ottawa.

Steve and Richards took their team to a remote location to brief them on Operation Ottawa and outline the rules. Steve pointed out that forensics evidence was the key to solving the cold cases. It was highlighted that their budget was tight so they had to make sure to only pick items that could lead to uncovering new evidence. The team then watched reports on the crimes and went over the events that took place.

As they started combing through the evidence, the team started to make decisions about the kinds of items that might lead to something.

Back at home Steve was working with a glass of wine when Jack turned up unannounced to spend time with his father. Steve asked if Jack had fallen out with his mother and Jack played down an argument they’d had.

The next day Richards called Steve and told him he needed to come to HQ as there was a ‘fly in the ointment’. Jonathan Hill (David Flynn), the journalist that Steve saw at the beginning of the episode, came in for a meeting about making a documentary about the murders. Steve explained that they had reopened the cases and he asked Jonathan to shelve his documentary and promised him an exclusive when they were ready to announce their findings. He also threatened to ruin him if he broke their agreement.

Cooper met with the parole board where he had to give assurances that he had changed and was no longer a threat. The board noticed that Cooper’s son Adrian (now Andrew) had never visited him and Cooper tried to play it down.

Steve was informed that Cooper had been granted parole and he shook his head in disbelief. His next stop was to visit the parole board and request that the parole was revoked. Steve explained that he was investigating Cooper again but had to admit he didn’t know if and when he would be charging him. The board decided to temporarily revoke Cooper’s parole.

Steve met with Jonathan over a pint to tell him more about the investigation. He told him that he wanted to use the news to send Cooper a message via Wales Tonight so that he would know they were on to him.

Back at the office, Steve assured Richards that the kids Cooper attacked wouldn’t be mentioned but he pointed out there was someone they needed to give a heads up – Andrew. They found him and explained that they were investigating his father and that they were going to make a public appeal. Andrew told them he didn’t like Cooper being referred to as his father and asked that they refer to him only by his name.

After Steve and Richards left, Andrew took a moment to take in the information he’d just been given.

Steve and Jonathan chatted while they were preparing for their televised interview. Steve was nervous and Jonathan shared his reasons for wanting to become a crime reporter. There was a knock on the car window and it was time for them to start filming.

Andrew meanwhile collected his pills and left his home.

The televised interview went live and Cooper watched on from his cell. Pat watched, clearly upset, and Steve revealed that he believed one man was responsible for all four crimes he was investigating.

Andrew headed to a train yard where he started necking pills and collapsed in the shrubbery. He was found by rail workers unconscious.

Preview episode 2 of ‘The Pembrokeshire Murders’

‘The Pembrokeshire Murders’ continues at 9pm tomorrow on ITV.