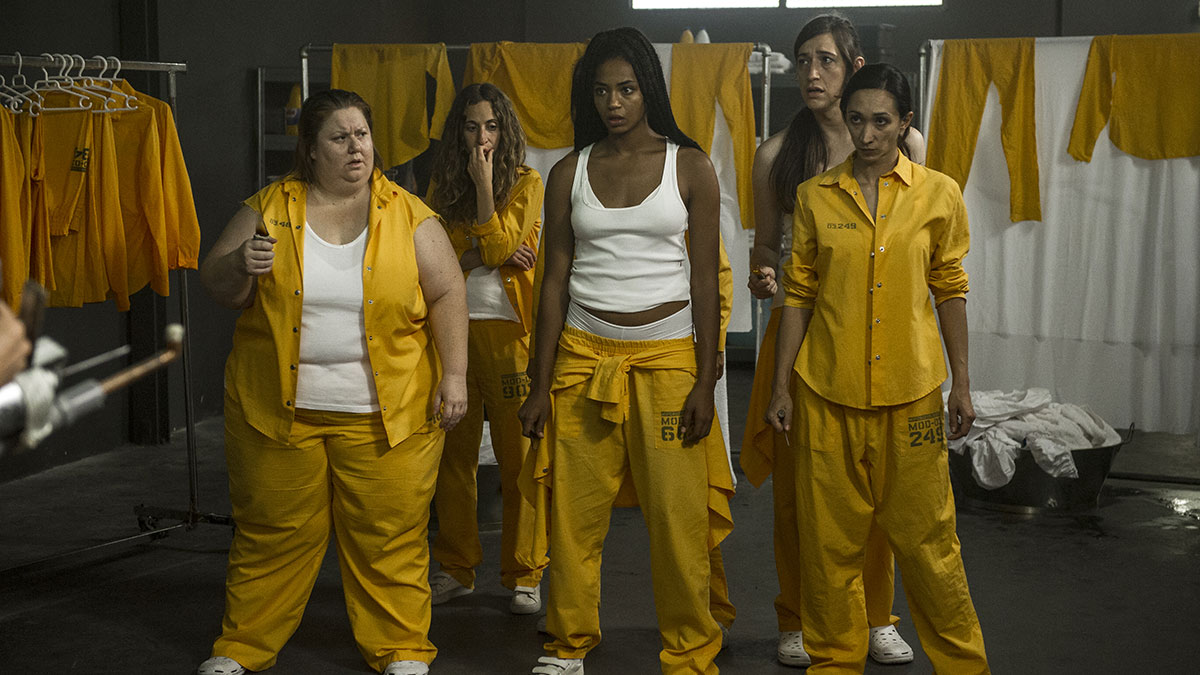 We’re on Season 4 of this gritty prison drama, known as ‘Vis a Vis’ in its native Spanish. The opening four minutes of the first episode of S4 gives a quick summation of the previous three series in one of the most brutal and violent 240 seconds of television you could imagine. Gunfire, stabbings, hangings, strangulations – a smorgasbord of mutilation and murder. And virtually all of it carried out by, and committed upon, women.

There are four main female leads in this show. The episode opens up with Zulema Zahir (played wonderfully wickedly by Spanish/Jordanian actor and singer, Najwa Nimri) being deported back to Spain, having been captured in the previous season.  She’s on a normal scheduled flight with two guards and a plane full of regular tourists and travellers; and throughout you can see her looking around, taking in her surroundings, playing mind games with her guards, her fellow passengers – you just know she’s up to something. When the flight hits turbulence, she gets her opportunity in a particularly gruesome – and frankly ridiculous – way.

We also meet again Altagracia, played by Adriana Pez (she played a somewhat minor role in Spectre as “Mexican woman in the lift”), who is also coming back to the prison. She killed a prison guard in the previous season, so we know what sort of reception she’s likely to get. And she was there, too, when Governor Sandoval suffered a John Bobbitt-like attack, resulting in him now having the nickname Barbie. It doesn’t take long for her to land herself in trouble.

Then there is Saray. She is the one who cut off the Sandoval’s genitals – something he keeps in a jar on his desk, like an odd-shaped pickled gherkin. He raped her in the previous series, which was the reason for her surgery on his privates. The assault resulted in her getting pregnant, and she now has a child – the daughter of the Governor.

And finally, there’s Mercedes, who runs the prison drug ring. She’s unlike many of the other inmates – she’s intelligent, well-educated and from a privileged background. Governor Sandoval knows that she is the route for illegal narcotics, but seems happy to turn a blind eye to it – better to know where it’s coming from than to waste endless hours searching for it. However, he has another plan for her, which we witness in the final, bloody scene.

There’s plenty going on here. You could argue that the show is little more than an ultra-violent soap opera. It’s not a million miles away from ‘Bad Girls’, ‘Prisoner Cell Block H’ or even ‘Within These Walls’, for those of you with longer memories. But it’s well done; the characters, although rather cliched and predictable, are very watchable. You find yourself rooting for the underdogs – the women who’ve stolen, murdered or done some unspeakable things to end up on the wrong side of the bars. Mercedes is a good example of this; she’s dealing drugs, but she has a daughter who she wants to ensure has a good up-bringing. She’s essentially a good person. It’s the blackmailing, smarmy Governor we dislike; Mercedes and many of her fellow inmates are just victims of their circumstances.

I believe this is the last season of the show (there’s a spin-off series entitled ‘Vis A Vis: El Oasis’ out now in Spain), and if you enjoyed previous seasons, this will go down a treat.

Walter Presents: ‘Locked Up’ is available as a boxset on All 4 now.

Advertisement. Scroll to continue reading.
In this article:Locked Up, Walter Presents