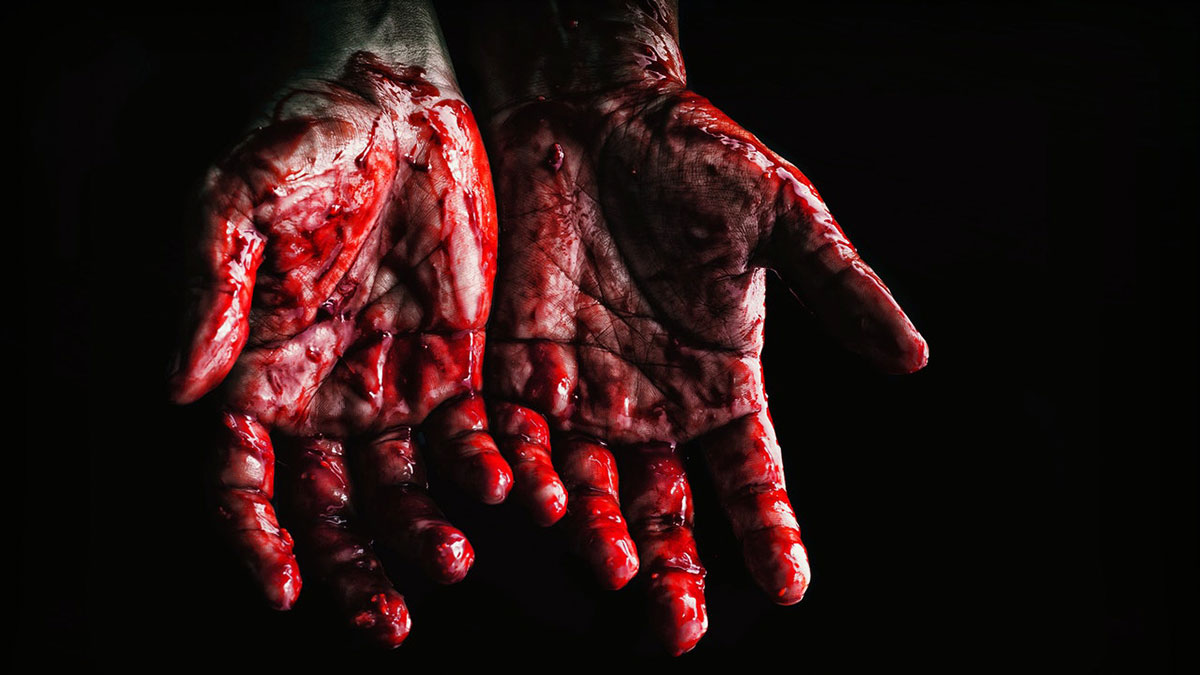 If you are looking for a tongue-in-cheek love letter to the slasher movies of the 80s, then Drew Marvick’s ‘Pool Party Massacre‘ is for you. This super low budget indie film follows what should have been a relaxing day by the pool for a group of young socialites. As the film progresses, the teenagers begin getting murdered one by one, in increasingly gruesome ways. With lots of blood and gore, imaginative murders and try-hard acting, it’s a must on the slasher bucket list.

The movie is set at the property of Blaire Withorpe (played by Kristin McKusick). With her rich parents out of town, Blaire, along with her best friend Nancy (played by Margaux Neme), decide to throw a pool party, during which her friends become increasingly drunk and obnoxious. With endless bad jokes, bitchiness and high school drama, we are almost wishing for the characters to be taken out, and it is with open arms that we welcome the killer onto the set. Armed with an array of hardware and gardening tools, the overall-clad madman sets about slaughtering his way through the bikini-clad bodies. Despite the gruesome hacking, chopping, drilling, and stabbing, it’s hard not to stay glued to the screen in anticipation for the next brutal attack – especially with the audience seeing the next weapon being chosen from the outlined tool wall prior to its use. With nudity, cheesy humour, and blood pouring out of this film in spades, it has undoubtedly reached the classic slasher quota.

Paying tribute to it’s 80’s roots, the opening credits use a pixelated dissolve in reference to the age of Sierra games. Kudos also must be given for the attention to detail when it comes to bringing in those nostalgic 80s elements – like mixtapes and boom box.

With only $6k in the bank to get from script to screen, Marvick flexed his micro-budget, horror obsessed muscles, stating that initially, the production budget was much lower. Starting out with a mere $11 in his wallet, Marvick used his powers of persuasion to get some volunteer victims and started work on was meant to be a bit of fun.

When Marvick was able to bluff a cinematographer onto the set, the story was cemented. As ideas developed and the cast and crew began taking the project more seriously, the script evolved into the bloodbath we are left with today.

Interestingly, despite the film’s summer vibe, the majority of the scenes were shot over a six-month period through winter, with some filming days falling below freezing. As if waiting around by the pool awaiting your grizzly demise wasn’t torture enough. For this reason, this pool party has a noticeable lack of swimming guests, with cast members refusing to enter the ice-cold water during filming. The script was allegedly changed upon the daily to accommodate the fact that no one was daring enough to take a dip.

With a nod to horrors like ‘Black Christmas’, ‘4/20 Massacre’ and ‘Jersey Shore Massacre’, any slasher fan will appreciate ‘Pool Party Massacre’, which doesn’t step into spoof or self-referential territory. Outlined with a single location, anonymous killer and a buffet of bikini-wearing babes for the slaughter, this indie flick takes things back to basics. The compromising situations that the characters find themselves in moments before their demise adds a little gruesome humour to the film, which uses the killer’s point of view repeatedly, an ode to certain horrors of the past, like Carpenter’s ‘Halloween’. The result of these unfortunate circumstances often makes the kills more hilarious than gruesome.

The only negatives that the gore lover may encounter are the delay between kills in certain sections of the movie. Arguably unnecessary dialogue (amongst a bunch of seemingly braindead bimbos no less) seems to be used to fill space, and it’s easy to get fidgety waiting for the killer to get his game back on. Some of the dialogue does also spiral into crass and excessively profane territory at times, making the sexual undertones of the film come over slightly too strongly.

Overall, considering its modest budget, ‘Pool Party Massacre’ does tick all the boxes for the gore obsessed – a sizable body count, buckets of blood, and inventive kills.

The indie film is available on Blu-ray, DVD and VHS, along with a head of merchandise to sate even the most bloodthirsty viewer. Some extras in the Blu-ray box are pretty entertaining, including the making of, gag reel and director commentary.

To top off this B-movie bloodbath, a ‘Pool Party Massacre 2’ is in progress and started shooting back in April this year. The budget for the second movie is around six times that of the first, thanks to crowdfunding, which helped to raise over $35k for the project. The response led the cast and crew to bin their original script for the second instalment, and completely re-write the story. With a promise of even more blood and gore (with the head explosion to boot), some of the old cast returning for the new film, as well as the addition of some known faces, it’s definitely one worth keeping an eye out for.With two to choose from, a massacre marathon is definitely on the cards. And what better way to indulge in a poolside bloodbath than whilst floating in front of the big screen with your popcorn. Get your friends together and make your next pool party a movie night – minus the murders of course.

In this article:Pool Party Massacre