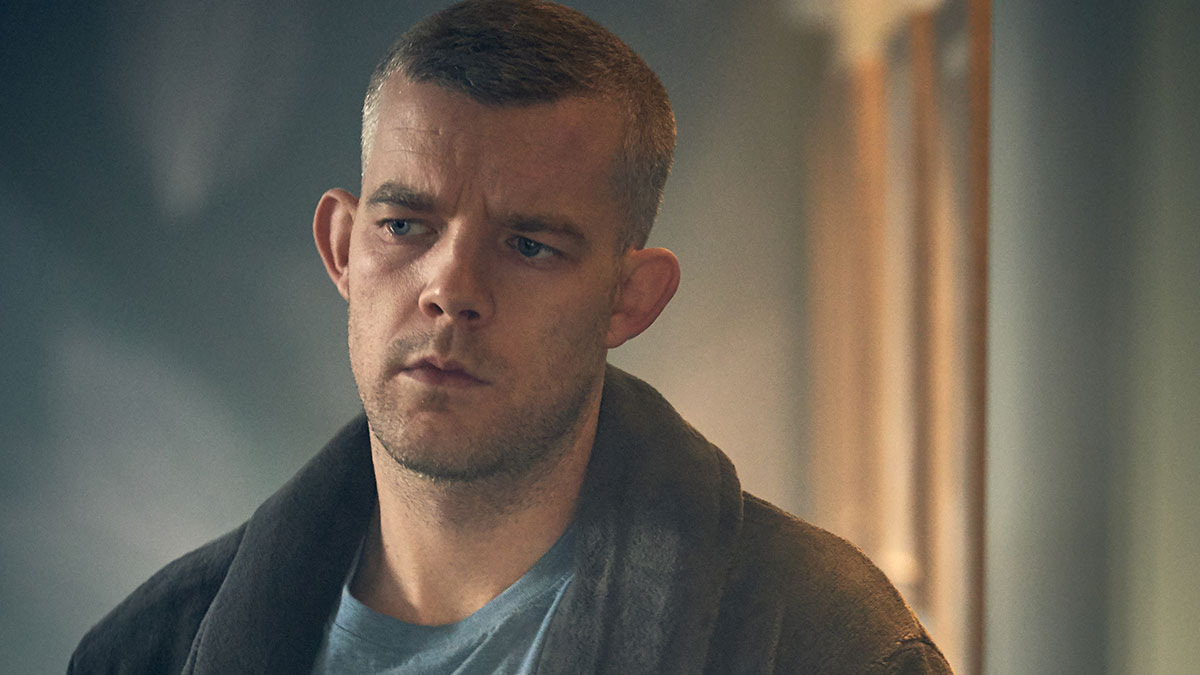 ITV’s new spooky drama ‘The Sister’ started tonight and the story will unfold over the next three nights.

If you want to avoid spoilers for ‘The Sister’, please stop reading this article now.

The first episode opened in 2013 with Nathan (Russell Tovey) drinking and about to take an overdose. He was stopped in his tracks by an appeal on the TV from a woman asking the public to help find her missing sister Elise (Simone Ashley).

Moving seven years into the future, Nathan is home alone and his doorbell rings. Answering the door he found a scraggly haired man named Bob (Bertie Carvel) and he told him that he couldn’t be there. After trying to get rid of him, Nathan reluctantly let him in and Bob gave him a document about a new housing complex that’s being built. Bob told him to burn it once he’d done with it before clocking a picture on the wall featuring the woman we saw in the TV appeal and her sister.

Nathan asked Bob to leave again but his wife Holly (Amrita Acharia) arrived home resulting in an awkward meeting. Bob left and Holly asked questions about who he was, which Nathan dodged. Holly went to get a glass of wine and she asked Nathan, ‘who was the girl?’ Looking panicked, Nathan asked what she meant and Holly expanded by saying that Bob had mentioned girl trouble. Nathan excused himself and went to the bathroom where he had a flashback on running in the woods, which resulted in him vomiting.

The next morning Holly offered to go to the pharmacy to pick up something for Nathan but he told her he didn’t need anything. After she left, Nathan ran down to the cupboard where he’d hidden the document Bob gave him. Inside it was the name of the Newbeck Green Housing project and a number. Nathan called Bob, who told him they had to move the body before the building work started, which Nathan tried to brush off. Bob asked him if something had arrived but wouldn’t tell him what. Nathan went to the front door and found a jiffy bag with a CD in it.

Driving into the woodlands, Nathan had another flashback, which took place in the same woods. In the present day he pulled the jiffy out and on the CD inside it said ‘Destroy After Use. Play It Loud’. The recording started and Bob’s voice warned the recording was made in an empty room and reiterated that it needed to be played loud. All that came through the speakers was static but as he turned the volume up, a woman’s voice could be heard saying ‘Nathan, I’m not dead’. That caused him to speed off in the car in a panic.

Returning to 2013 we saw Nathan parked outside Holly’s place of work watching her. Sat at his desk, in the office he worked in, Nathan held a post it with Holly’s name and number on. He dialled the number but hung up when a man answered the phone. Nathan tried again and asked to speak to Holly, and when she was connected to the call Nathan pretended he was looking for a house to buy. Holly invited Nathan in for a chat and he agreed to meet her the next day. Before the call ended, Holly asked how Nathan had heard of her and he lied and said that she’d been referred to him.

In the modern day Holly scared Nathan who was deep in thought, when she returned home. After exchanging small talk, Nathan asked Holly if she knew anything about the housing estate that was being built and she expressed her disapproval. Holly then asked Nathan if he’d heard from Bob and he said he hadn’t but that he needed to nip out for a bit to see him.

Back in 2013 Nathan was at a viewing with Holly and she was asking for his feedback on the house. He was non-committal and offered Holly a cigarette. She refused and they started talking about how Holly got into being an estate agent. Talk then turned to Nathan’s job and when things got a bit awkward, Holly made her excuses and left.

Returning to the present day, Nathan arrived at Bob’s house and Bob told him he couldn’t be there, before admitting he was joking. We were then taken back to 2009 when Nathan produced a radio show and Bob was a guest as a paranormal expert. A listener called in to the show to ask a question about a sighting of his dead mother and Bob explained the paranormal phenomenon.

In the modern day, Nathan produced the CD and Bob took him to task for not destroying it. Bob asked him if he had listened to it and then started explaining about the voice on the CD. Nathan denied hearing anything but when Bob tried to put the CD on, Nathan admitted he did hear the voice. Bob asked Nathan why he married Holly and Nathan warned him not to mention his wife again. Talk turned to the body they needed to move and Nathan said the body may have decomposed. Bob emphasised that if there’s any evidence, the police will find it and Nathan broke down saying he couldn’t do. When Bob mentioned Holly again, Nathan got angry and Bob revealed it was Holly’s sister Elise’s body.

Following his meeting with Bob, Nathan went home and he found Holly asleep on the sofa in front of the TV. He touched her hand and she woke up, asking how Bob was. Nathan told her to go back to sleep.

Jumping back to 2013 Nathan arrived at a bar to meet Holly for a date, and she confessed she wasn’t on her first cocktail. Nathan ordered a margarita and asked Holly if she was OK. Holly told Nathan she really liked him but that things were difficult. She struggled to get her words out but eventually told him that her younger sister Elise vanished after going to a party in 2009 on New Year’s Eve. She told him she left her sister at the party and revealed Elise’s body was never found and no one was ever caught for her disappearance.

With that out of the way, Holly started to loosen up and told Nathan that she’d told her mother that she was going on a date. She admitted it was the first time she’d felt excited in a long time. As she spoke about talking to her mother about the date, Holly broke down and Nathan said he had no idea what to say. Holly put her coat on and left the bar, telling Nathan not to call her when he offered to.

It was then revealed that Nathan and Holly had passed one another at the New Year’s Eve party with him arriving just as she was leaving. Elise caught Nathan’s eye and he watched her from the bar, before bumping into Bob.

Back in the present day, Nathan saw he had lots of missed calls from Bob. Holly walked into the kitchen and looked distracted. When Nathan asked if she was OK, Holly told him they needed to talk that evening. Nathan pressed her on what was the matter and Holly said she’d had her period. He tried to hug her but she asked him not to and they arranged to talk later over a curry. After Holly left, Nathan’s phone started ringing again and he grabbed it in anger.

At work Nathan was interrupted in a meeting and in reception he found Bob waiting for him. Bob asked Nathan why he was ignoring his calls and told him the situation won’t go away. He refused to leave the reception until Nathan spoke to him and made it clear he wasn’t going anywhere. Nathan took Bob outside and suggested that he needed to get away for a few days. Bob said once again that Elise needed to be moved and when Nathan tried to dissuade him, Bob told him Elise was haunting him.

Nathan’s reaction led Bob to believe that Elise was haunting him too. Bob told Nathan she wouldn’t leave them alone until they put things right and he admitted he was scared. He also said he felt like he was going mad and threatened to talk to Holly if Nathan didn’t help him. Nathan angrily told Bob to leave his family alone and stormed off.

That night Nathan returned home and Holly wasn’t there. He called her and got her voicemail. As he hung up he heard noises inside the house and went to investigate. He started talking to the spirit of Elise, asking her to do something if she was in the house with him.

The episode ended with another flashback to Nathan and Bob arguing as Elise’s lifeless, but still breathing, body was pulled out of a car in the woods.

‘The Sister’ continues tomorrow night at 9pm on ITV.

In this article:Featured, ITV, The Sister