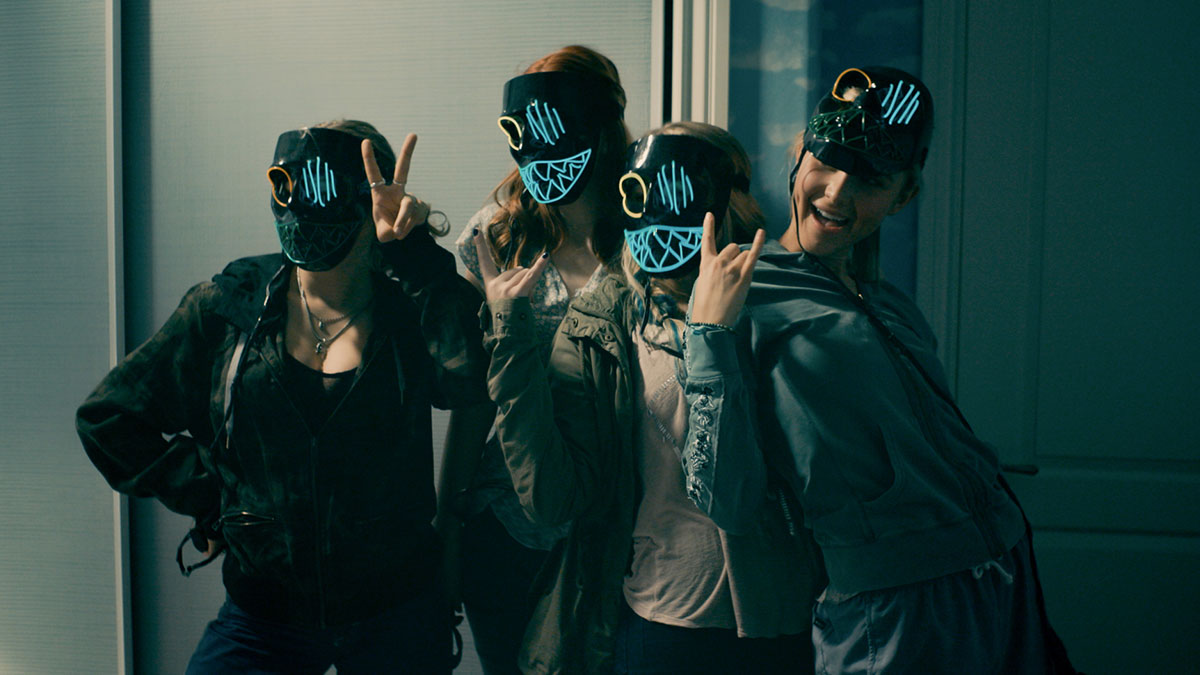 Emma (Troy Leigh-Anne Johnson) and her little sister Lilly (Dakota Baccelli) move in with their cousin Taylor (Isabel May) following the death of their father. An outsider Emma is pranked by Taylor and her friends – Madison (Odessa A’zion), Jess (Brooke Sorensen) and Paige (Jessica Sarah Flaum) – and she watches on in horror when the girls decide to go across the street to prank an ill teenage girl called Julie. Even though Emma enables them to get into Julie’s house, she refuses to take part but when the prank goes horribly wrong, she has to venture over the street to find her missing sister.

‘Let’s Scare Julie’ from film-maker Jud Cremata aims to rewrite the horror rule book and it’s an experience that’s very different from your usual horror fare. Firstly, the film was filmed in one shot so you really do get on board with what’s happening in real time. Secondly, Cremata is in no rush to deliver the pay-off you’re expecting instead opting to film the five girls talking (often over one another) and teasing one another for longer than was necessary.

The film takes too long to get to the point where the girls go across the street, and we only see what happens from Emma’s point of view as the camera stays in her bedroom. That does create some suspense but the film really kicks in when Emma has to leave the house and enter Julie’s home. The lighting is dark with Emma aided only by her phone light, and with no sign of the other girls, she’s left to wander the creepy, and rumoured to be haunted, house on her own. That part of the film is pretty effective, I just wish we’d gotten there a lot sooner.

Perhaps the biggest problem with ‘Let’s Scare Julie’ is that it doesn’t really explain anything. The ending is abrupt and the pay-off you wait for never really arrives. It’s true to say there are some effective scares but I feel Cremata could have gone further. There is an attempt to shoe-horn in a revelation from Emma near the end but it doesn’t really add to, or help, the story. With the exception of Emma, none of the other girls are likeable either. I found myself hoping they’d be picked off one-by-one and quickly after spending only 10 minutes with them.

Acting wise there’s not much of note here. Fans of ‘Nashville’ will recognise Odessa A’zion (she’s basically playing the same character) and Troy Leigh-Anne Johnson does a solid job of leading the film, despite not being given a whole lot to work with. The rest of the girls are just fine but it feels like there wasn’t much of a script in place and that the director just filmed them ad-libbing together.

‘Let’s Scare Julie’ isn’t going to be remembered as a classic. The second half is tense but it’s tendency to wander into strange for no reason doesn’t make a whole lot of sense. The climax ends up being an anti-climatic one and by the time the credits roll, you’re not much wiser as to what’s going on than you were when the film started.

‘Let’s Scare Julie’ will be released on Digital HD by Signature Entertainment on 21st December 2020.