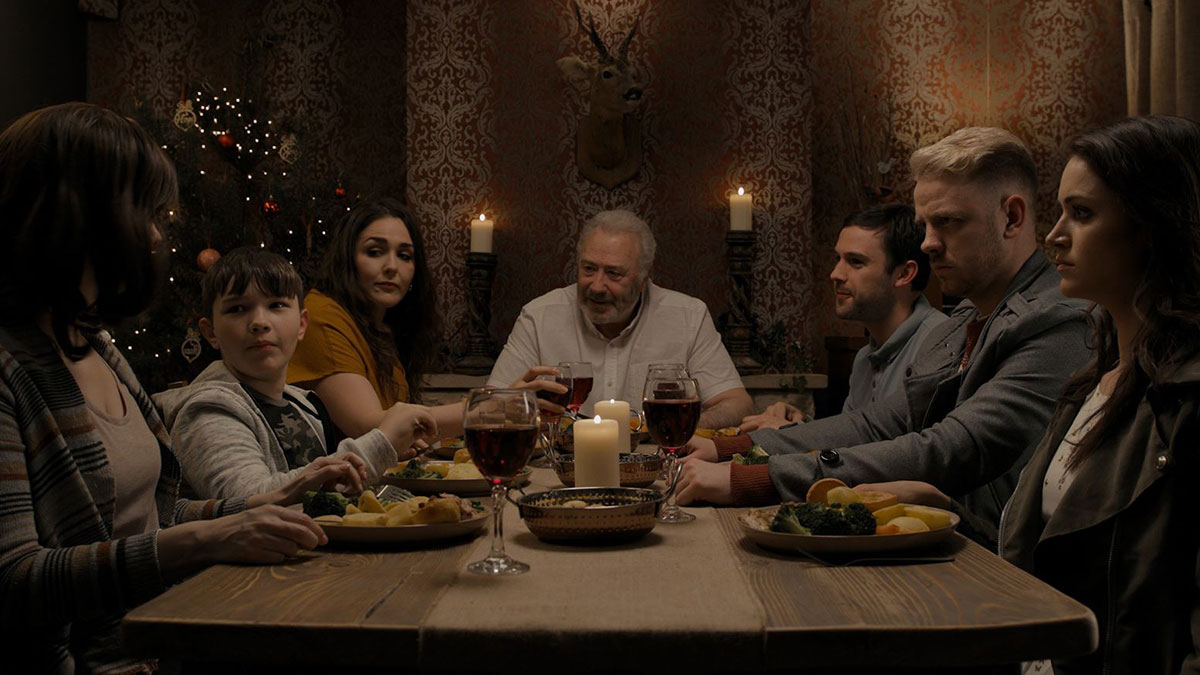 Michael (Frank Jakeman) invites his young neighbours Jack (Neal Ward) and Lucy (Samantha Loxley) to spend a Christmas dinner with his family. His wife Cassie (Jennifer K. Preston) has been battling cancer and their three children Lauren (Nadia Lamin), Eric (Lee Hunter) and Ben (Buddy Skelton) are together to celebrate the holidays. Not long into their meal, Cassie delivers some good news, which is overshadowed by an unexpectedly violent event that plunges the entire family into danger.

‘Hosts’ is a British film from film-makers Adam Leader and Richard Oakes. It slowly eases into its storyline hinting at weird goings-on before catching you completely off-guard once the violence kicks in. The scene that changes it all is actually very shocking and well-done but sadly the rest of the film never manages to live up to it. Instead what you get is a very muddled, half-developed idea that doesn’t give much of a payoff.

Jack and Lucy embark on a murderous rampage, terrorising the entire family, but what actually happened to them to cause the switch in behaviour is never explained. There are some hints and suggestions, but as far as I could tell nothing particularly concrete. That means that you feel like you’re watching two people behave violently for pretty much no reason other than to give the audience their kicks.

There’s an attempt to flesh out the characters but it doesn’t make you root for them. That’s not helped by the acting, which is variable, and the film-makers missed a few opportunities to make this an enjoyable watch. While I don’t need everything spelling out to me, and enjoy a bit of mystery in a film, ‘Hosts’ doesn’t bother to explain anything. Even worse, its character make a series of stupid choices and it’s bizarre that none of them realise their dinner guests are behaving oddly the minute they walk through the door.

‘Hosts’ is a film I hoped would have been a joy to watch but sadly it was nothing more than violence for the sake of it. Had there been a cohesive and compelling story pulling the scenes together, it would have been stronger but unfortunately it plays out as a series of violent set pieces with barely any plot. That left me cold and made the film a bit of a slog.