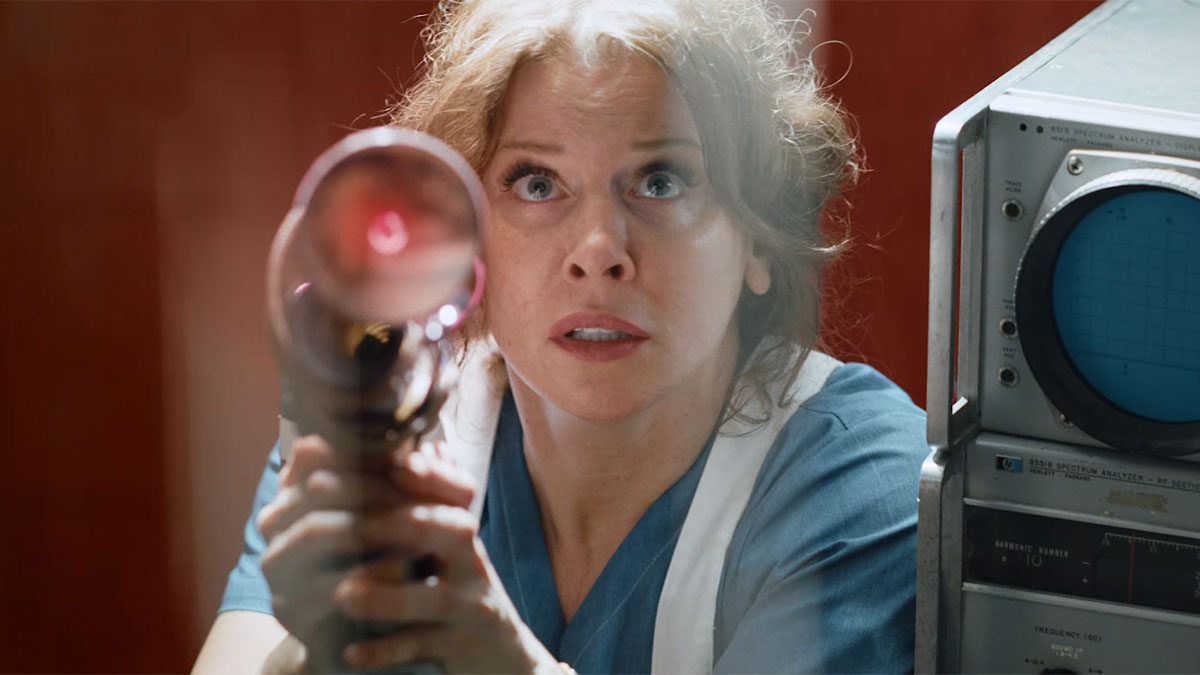 In the 1960s nurse Patricia (Eva Habermann) works at a small clinic alongside the madcap Dr. Guy (George Hardy), who has invented a ‘Get Gone’ machine to remove skin abnormalities. Despite having failed to patent the machine previously, Dr. Guy is confident his latest changes will be a success but during his showcase, he accidentally creates a giant cyst monster that goes on a rampage.

‘Cyst’ is from director Tyler Russell and it’s a loving nod to the silly but fun monster movies of the 60s. The film doesn’t take itself seriously in the slightest, which means you can sit back, kick your feet up and just watch the mayhem unfold. Those who are squeamish may struggle to get through the first few minutes as poor nurse Patricia is subject to plenty of discharge from the cysts of patients she’s caring for.

Patricia is determined to quit her job when she discovers that Dr. Guy is trying once again to get the ‘Get Gone’ patent approved. A former attempt resulted in her being injured and scared, but her announcement that she’s leaving after her shift seems to send Dr. Guy into overdrive. He enlists hapless assistant Preston (Darren Ewing) to help him demonstrate his machine and it’s not long before things turn dire very quickly.

The build-up to the reveal of the cyst monster is entertaining. The snarky tension between Patricia and Dr. Guy is amusing to watch and sassy receptionist Tammie (Keturah Branch) adds further light relief. Patricia’s strong character constantly clashes with Dr. Guy as she tries to rein him in but he believes he’s on the cusp on a money-spinning idea. The scene where the cyst monster is created is both vomit-inducing and hilarious, and the moment it arrives the film switches into a faster pace and becomes almost farcical.

The lead actors – Eva Habermann (‘Sky Sharks’) and George Hardy (‘Troll 2’) have a lot of fun with their roles and it’s their energy that allows you to buy into the bizarre scenario that unfolds. Habermann remains mostly straight-faced as she tries to bring some order to the very clear impending disaster while Hardy really goes for it, portraying Dr. Guy as a mad professor that is unaware of his limits. The two together are quite brilliant and they’ll have you laughing your socks off.

The visual effects are intentionally hokey and that works to the film’s advantage. It’s a fantastic throwback to the 60s and it’s refreshing to watch a film that doesn’t take itself seriously. The cast look to have had as much fun making it as you will watching it, and that infectious energy benefits the film greatly.

Will ‘Cyst’ be a classic in years to come? There’s a high chance it’ll attract a cult following for sure but if you go into it expecting to laugh and be entertained, and nothing more, you’ll come out very happy. Tyler Russell’s direction is zippy, the film looks fantastic and the cast is brilliant – what more could you want from a monster movie?