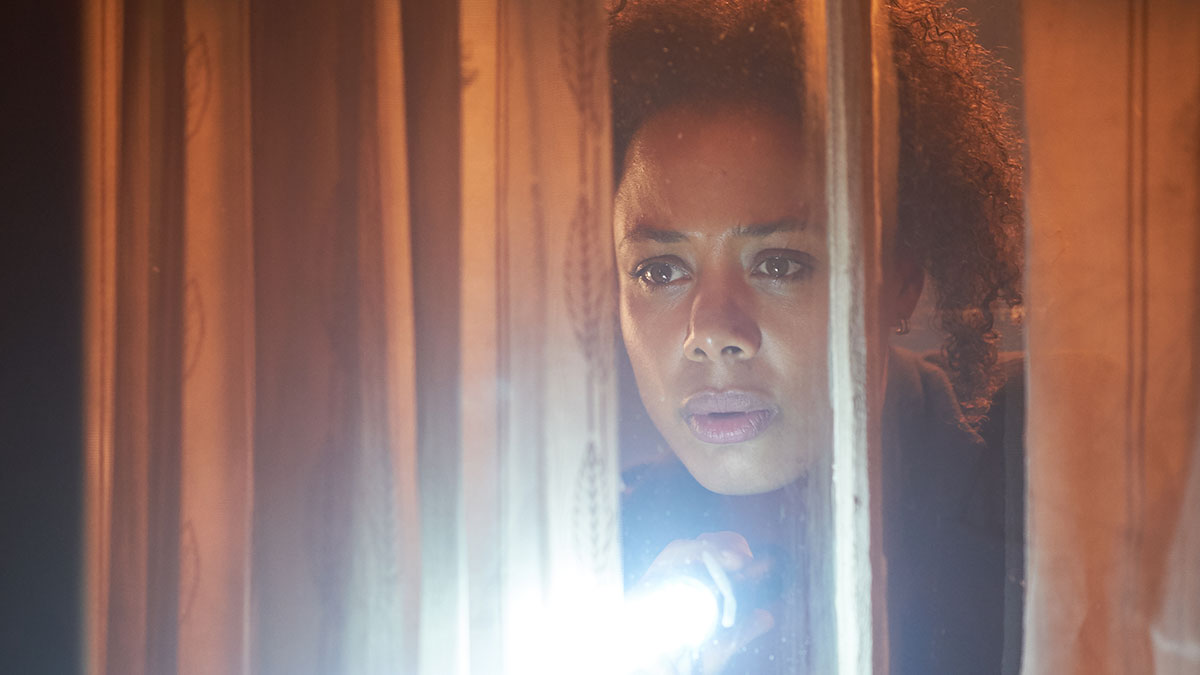 ITV’s big new spooky drama ‘The Sister‘ kicks off on Monday night and it’s sure to have the nation hooked as it’ll be airing on four consecutive nights.

The series is based on the book ‘Burial’ by Neil Cross, and Cross has written and directed the four-part series. The cast includes Russell Tovey, Bertie Carvel, Amrita Acharia and Nina Toussaint-White.

I caught with Nina, who plays Jacki, recently to find out more about the series, discuss the part her character plays in the story, and to talk about what it was like to be part of such a phenomenal ensemble…

What is ‘The Sister’ all about?

‘The Sister’ is a psychological thriller and it’s created by Neil Cross, who’s also the creative, ‘Luther’ and ‘Spooks’. It’s a four-part series, which spans over three timelines and I’d say it definitely has a merging of genres. It’s kind of a murder mystery, as well as a spooky paranormal drama. The show follows the story of Nathan, who’s played by Russell Tovey, who has actually been hiding a very dark secret from his past, which involves the disappearance of his wife’s sister Elise. 10 years after the disappearance a character called Bob turns up, played by Bertie Carvel, and he threatens to turn Nathan’s whole world upside down by revealing the truth of what happened the night of the disappearance.

Bob isn’t the only character that’s threatening to do that to Nathan, because your character Jacki has a big part to play too…

She has a big part to play! She’s an interesting character and really integral to the story. She’s not only the chief detective in the investigation of Elise’s disappearance but she is also Nathan’s wife Holly’s, played by Amrita Acharia, best friend and maid of honour. She goes through the series harbouring this secret. She interviews Nathan at the very beginning of the investigation and then it’s revealed that she is the best friend, and she decides to harbor the secret for the benefit of Holly. She puts her friendship and her love for her best friend at the very front of everything else, despite it maybe being counterproductive to the investigation itself. She wants to protect Holly’s heart and she does this by holding on to the secret. She doesn’t necessarily know that Nathan has something to do with the disappearance of Elise, but she knows that he was around on the night of her disappearance and she had investigated him.

The moment in episode two when Nathan and Jacki come face-to-face in a restaurant is played beautifully. You have no idea which way the scene is going to go. If you were in Jacki’s shoes, would you have kept the secret from Holly?

I would have kept the secret. At the very beginning all that’s happened is Jacki interviewed a guy who happened to be at the same party as Elise. (Stops to think about it). Ooh I don’t know, you’ve put me on the spot! Would I keep that secret? No, I probably wouldn’t actually. I’m retracting my statement. I think I’d want my best friend to know what she’s marrying into and the fact that he hasn’t told her the truth from the getgo means what else is he hiding. I would tell her the truth.

It’s an interesting question to ponder because I had the same reaction you’ve just had. My biggest fear is that it would all end up coming down on me…

Exactly. Not only would it come down on me, but now you’re telling a lie and you’ve got a secret. I think I would definitely tell the truth. The scene you’re describing, Jacki comes out all guns blazing towards Nathan and says you have to tell her. She’s pushing and she’s saying this isn’t on, I can’t believe that you’ve kept the secret. Then Nathan describes how happy Holly has been and that’s something that nobody’s seen for years, since the disappearance of her sister. I think that just pulls on our heartstrings and she thinks, ‘why mess up this thing that is potentially life changing and a chance for happiness?’

This show is so well-written and it’s gripping too. How did you get involved with it?

As an actor I generally want to get involved if someone wants to give me a job really (laughs). That’s a bit of a lie. I get sent lots of scripts. I audition a lot. Sometimes you get things through and you just don’t resonate with the script because the writing’s a bit clunky. I’m not criticising writers because I can’t write but it’s a very hard task. It just doesn’t jump out at you. This was an absolute page turner. It had me from the very first scene. I’m not the fastest reader in the world and I sped through it. Neil is a wonderful writer. He’s phenomenal and the characters’ relationships resonated off the page. I was really excited to be offered just the audition. With the audition comes a recall and then it’s their decision. I’ve decided if I want to go up for the audition or not, and then after that it is their decision. I was hooked from the email coming through. It’s a phenomenal piece of writing, I think.

This cast is phenomenal too. You don’t get much better than the actors involved in this show. What was it like being a part of that?

I’ve been very, very lucky. I’ve followed Russell’s career my whole life. I remember him on a baked bean advert when I was about five. I did feel a bit… not star struck… but generally when you go onto a job people are like, ‘oh my gosh you’re working with this person and that person’, and I think Russell was the first person I myself had that feeling of excitement (about). Being around them all, their their talent is incredible. They’ve all got different traits. Amrita, the emotions that come out of her and the way you can empathise with her character… the truth telling that she does is absolutely phenomenal. Then you’ve got Bertie, and he likes to put in inverted commas his character acting, literally blew me away. It makes you feel a little bit out of your depth when you’re around such talent, to be honest. Russell was able to change within a second. Our director Neil would come up to him and go, ‘we haven’t got long. I need you to dothis thing. We’re not going to say cut, I just want you to give me three different takes’, and he just did it; three different ways of doing the same thing. I think that’s true talent. It’s something that I haven’t mastered myself. I felt not only excitement but honoured and a little bit nervous because you’re working around such wonderful people.

You mentioned before about how the show tells it story over multiple timelines. Was that the biggest challenge on this shoot?

I think you’ve hit the nail on the head. It was the jumping from timelines. I think it was both a blessing and a challenge. A blessing because I’ve never been in a show in which I aged. I was able to evolve and show the nuances within her changing in maturity. A challenge because I gave it a stab at bringing those character traits out. I’m holding my hands up saying I don’t know if they were the right choices, now that I’ve seen it (laughs) but I do think I gave something a go. Jacki does start off as a detective inspector at the very beginning when Elise first goes missing. She has to impress her boss, she’s a bit jittery and she’s a South London girl. Within the 10 years, she’s moved up the ranks, she’s Detective Chief Inspector and she’s at the top of her game and has moved quite quickly within her career. There are comments within the show on Jacki not really having much of a personal life. I think that gave me license to resonate that within her evolving, how it hardened her and how she kind of changed her tone and her physicality. For me, I’ve never had to play around with something like that. It was a massive challenge.

How are you feeling about the show finally coming out and being shown over four consecutive nights?

I’m buzzing. It was supposed to come out in springtime so it’s been a long time coming. There was like delays with completion and the edit and stuff like that. I think it’s a perfect time to come out being a kind of spooky drama and with Halloween coming up. I think it’s something different for ITV. I think people are going to be gripped. In autumn people are drawing in and hibernating. They need something new to watch and summer’s over but now with the current climate and lockdown, people are going to need stuff to do. It’s hopefully going to get a really good reception so I’m excited to see what people think.

What do you have coming up after ‘The Sister’?

I’ve been acting for 13 years and there are ups and downs of this career. It’s like a roller coaster. There are auditions out there and I am auditioning, and getting very close. I’m still waiting to hear on certain roles so I can’t really talk about the jobs that I’m in the running for. Nothing to say at the moment but that’s my life. I’ve either got a job or I haven’t (laughs).

‘The Sister’ begins on Monday 26th October 2020 at 9pm on ITV and it will air over four consecutive nights.

In this article:Featured, ITV, Nina Toussaint-White, The Sister