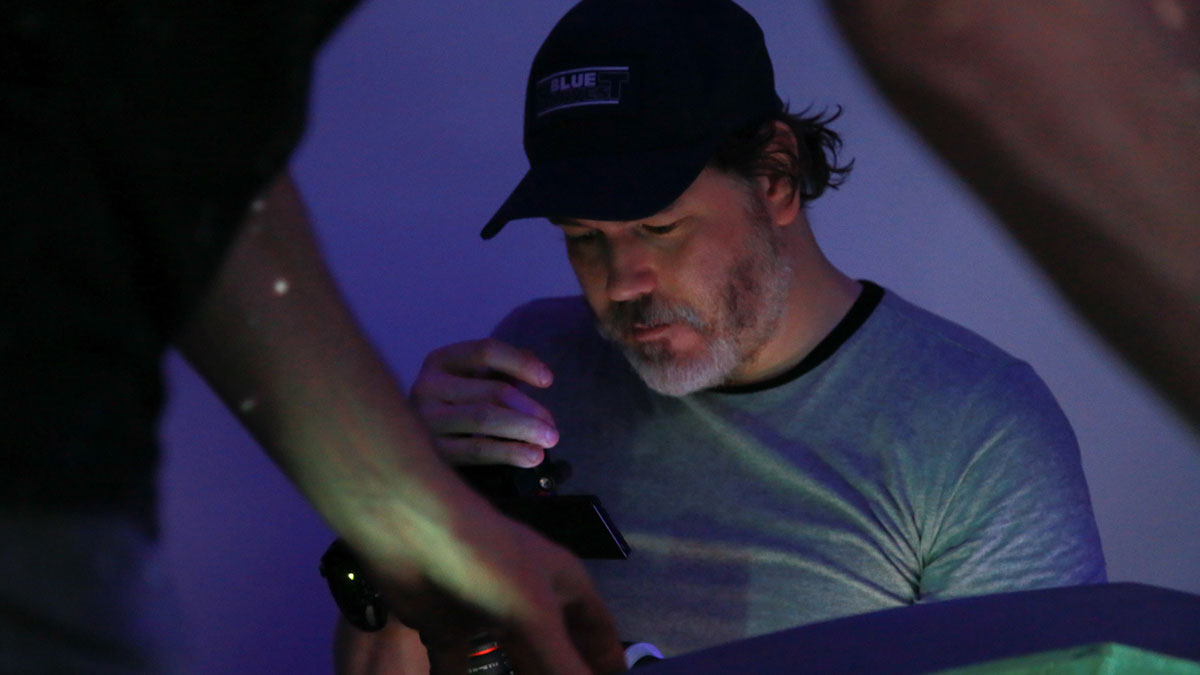 Film-maker Marc Price caused a sensation when he brought his film ‘Colin’ to FrightFest in 2008, a film he made with a budget of only £50.

This month, Price is returning to FrightFest for the World Premiere of his ambitious space thriller ‘Dune Drifter’. A big film on a modest budget, the end result is breath-taking and if it’s not already, it should be on your list of films to catch at the festival.

I spoke to Marc recently to discuss the making of the film, the challenges the pandemic caused, and to find out about the visual look-and-feel he created for ‘Dune Drifter’…

Your new film ‘Dune Drifter’ is having its World Premiere at Arrow Video FrightFest this month. What’s it all about?

It’s about the survivors of a devastating space battle who are marooned on an inhospitable planet and have to survive.

Where did the idea for the film come from?

We found ourselves in a situation where someone was willing to finance and distribute a sci-fi. I initially thought about something small and getting another director for it. But my partner (Special Effects Supervisor Lea James) said that I should be more ambitious than usual because it was a genre I loved and a hell of an opportunity to do something that I’ve always talked about.

My producer (Michelle Parkyn) said what budget we would have, so I got writing within those parameters and managed to pull a draft of the screenplay together in 2 weeks. It developed from there but the structure remained pretty much the same.

I understand that part of the film was shot during lockdown. How did you manage to do that and what challenges did you face?

Nicky Evans has a passion for building stuff. He’s one of the best actors I’ve worked with and although we’ve known each other for a few years, we got close on ‘Nightshooters’. He mentioned that he was interested in production design and I asked if he’d build our Starfighter set. Nicky was up for the challenge and worked with David Ross, our miniatures guru, to make sure the set matched the models.

The most flexible location to build anything was our living room! What we affectionately called “The T-Wing” was meant to stay there for a few weeks, but lockdown meant it ended up staying there for 6 months.

That’s what made a lot of the lockdown shoot manageable. Lea James doubled for Phoebe in a lot of shots and it all seemed to work quite nicely.

In an attempt to reduce the workload for our VFX team, we didn’t use much green screen. We strategically positioned our TV for all of the monitors and created a Pepper’s Ghost effect for the holographic display at the front of the starfighter. Everything out the windows was front or rear projection.

Shooting in this method meant there were a few moments that we planned to shoot at the very end, but couldn’t because of lockdown. We got creative and re-thought a few bits and pieces and it all held together thankfully.

You’ve managed to create a fantastic looking film on modest budget. Tell us a bit about how you created the visual style and effects?

That’s very kind of you to say! The main thing I wanted to avoid was that green screen fuzziness you get with most sci-fi made on a modest budget. I wanted the world to feel tangible and real. For that, we had to find locations.

We studied imagery from the Russian Venera missions and there was an area in Iceland that had a similar vibe. If we cut down to a skeleton crew and shot it in 7 days, Iceland fell within our budget . So that’s what we did.

I worked with colourist (Roma Kedochim) in pre-production with a plan to remove certain colours so the landscape would feel unnatural, but not fake. The other thing I wanted was for the environment to be unforgiving to Adler. Her red costume pops against the black sands of Iceland or the grey rocks. The Drekks were designed with a colour palette that almost matched the landscape. Which hopefully feels like the Drekks could pop out from anywhere and Adler wouldn’t have anywhere to hide in all the flat expanse.

I wanted to restrict moments of eye contact. The seats in the fighters are back to back. So any looks are achieved through monitors. Hopefully this helps maximise the impact of moments when Adler and Yaren are locking eyes in the life raft, without helmets.

Your lead Phoebe Sparrow carries a lot of the film on her shoulders. How did you get her involved with the film and what do you feel she brought to the character of Adler?

The part was written for someone we had worked with a few times before. But there were some scheduling issues we couldn’t work around. So we said to that actor “Let’s not stress! Come back for our next film” and began our search for the next suitable Adler.

Phoebe had initially read for a role we ended up cutting and was fantastic. I checked she wasn’t claustrophobic, which would have been a problem being stuck in a helmet for most of the movie, and offered the part pretty much right away.”

I felt the key was in how Adler is clearly processing a lot of frustration, fear, loss. It was precisely how the character needed to be in order for her braver choices to feel brave. I wanted that to come across with stillness and restraint.

That can be a nerve shredding thing for some actors. After a while it feels like you aren’t doing anything.

Phoebe didn’t seem to worry about that and was able to convey everything with the flick of her eyes or a very cold delivery of dialogue. It solidified Adler’s arc of starting the movie as a literal passenger. Caught up in the decisions of others. Waiting for rescue. And how she ultimately makes the decision to save herself.

Bravery doesn’t come from fearlessness. It comes from facing up to a choice and punching through that fear. Phoebe pulled that off effortlessly.

One of my favourite moments is her reaction to Rich Corgan’s gunner talking about the “Quebec Incident” early in the film. It’s literally Phoebe looking at a monitor. But it feels like so much more. When that scene came together with sound and the first hint of her theme from Adam Langston’s score: It felt exciting!

The scenes with Adler roaming around the alien planet look impressive. How challenging was it to make your location look like another planet?

After working on the colours with Roma, it was mainly about a sense of isolation. We would look for a vast expanse and drop Phoebe into the frame. For Adler we designed everything so that she didn’t fit comfortably in any environment. Enhancing the red in her suit helped her pop out as this unnatural, alien thing.

We reinforced the visuals with the sound design. Having Phoebe’s performance cocooned in the helmet and feeling somewhat claustrophobic compared to the open winds and rumbles of the planet should give the illusion of this inhospitable world just and inch away from her nose.

To separate the sound inside Adler’s spacesuit and the environment. Our incredible sound mixer, Ben Baird of Aquarium studios said that sound recordist Danyaal Shah’s decision to put a mic inside the helmets allowed him the freedom to mix a dynamic atmosphere that was both expansive for the landscape and claustrophobic in how close and contained Adler’s vocals and breath felt inside her suit.

What’s the biggest thing you learned from making this film?

I learned that it’s worth taking the risk and being ambitious. I don’t know where the foolishness came from that convinced me we could make a movie with vast locations and space battles and laser fights on such a modest budget.

I may not be as willing on the next one. This budget stretched things pretty far. But something I’m honoured by is the fact that once payroll was covered, all we had left to make the film was creativity of the team. They all pulled together and we ended up with something I really hope people will enjoy.

Michelle Parkyn is one hell of a producing partner! She’s got 3 projects lined up and ready to shoot. I’ve only got a script for one. The plan is to spend the rest of the year writing the other two and whichever one is ready to shoot next year will be for Michelle to decide. We have an action film, a drama and a drama with action! I’m excited about all three!

‘Dune Drifter’ will have its World Premiere at Arrow Video FrightFest on Saturday 24th October at 4.45pm. For more information and tickets please visit www.frightfest.co.uk. Watch the ‘Dune Drifter’ trailer below: