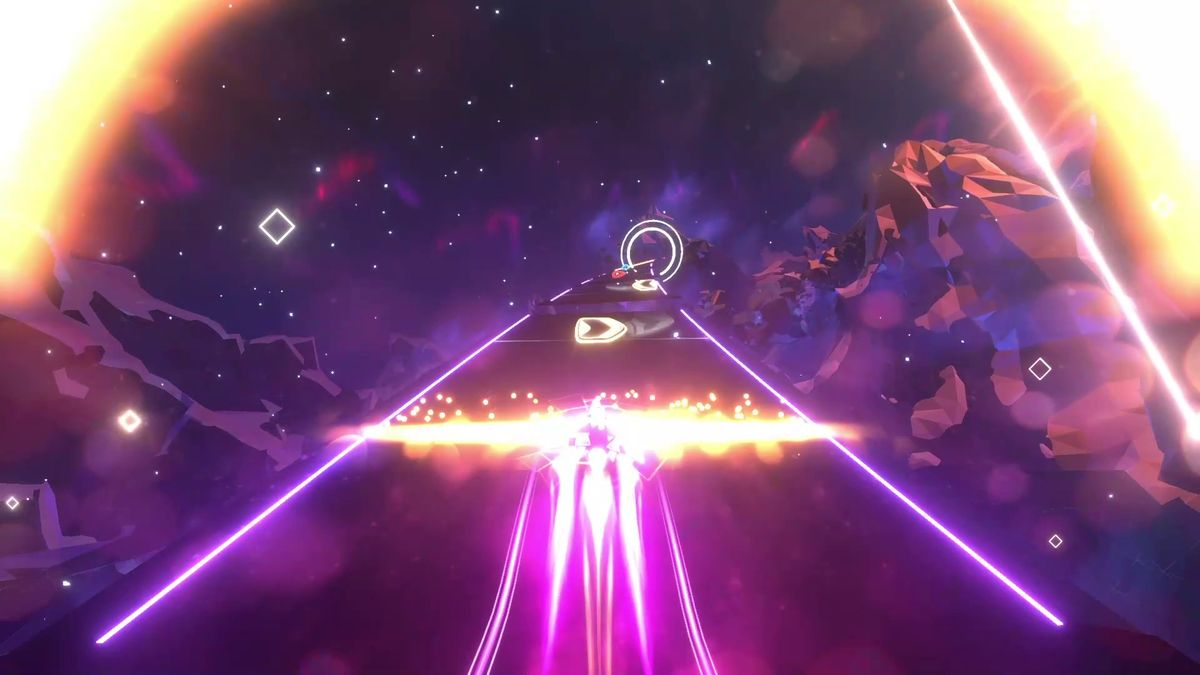 AVICII Invector Encore Edition is the definitive edition of the AVICII Invector game from Hello There Games and Wired Productions. The original game was created in collaboration with Swedish performer, producer and songwriter Tim ‘AVICII’ Bergling and released back in 2017 on PS4.

After the sad passing of Tim in 2018, his father set up The Tim Bergling Foundation. The developers decided to revisit the game, enhancing everything from the visuals to the mechanics and integrated even more of Tim’s music. All of the music royalties from the game are donated directly to the charity. The Encore Edition release was timed to celebrate what would have been Tim’s 31st birthday.

AVICII Invector is a rhythm-action game set to the music of AVICII. Visually it looks like a cross between WipEout, Amplitude and Rez Infinite. The stages are set across seven different worlds with each stage set against one of AVICII’s tracks. Players are given semi-control of a spacecraft which is racing through the world on a predefined path. Graphically the game is absolutely stunning to look at and there was more than a few times that I messed up while taking a peek at the scenery.

The gameplay is similar to other music titles such as Guitar Hero. As your spacecraft races forward you need to press various buttons in time to the beat. Different visual elements litter your path and indicate which buttons you need to press. These are a mix of the four face buttons and the left shoulder. It’s also required to tap the left stick left and right to move your position and rotate the level. You are rewarded by how accurate your presses are and how many you managed to hit in a row without making a mistake.

The game feature four difficulty levels – Beginner, Easy, Medium and Hard. If you’re new to the genre then it’s well worth spending time with Beginner and Easy before getting stuck into Medium and Hard. The tougher the difficulty the more the game asks of you. For example, on Easy you’re only concerned with one or two different buttons to press. However, once you reach hard you’re constantly having to juggle all the different buttons at once.

As I progressed up the difficulty levels I found the game to become more addictive. The harder difficulties really do test your reflexes and co-ordination. With practice, the muscle memory kicks in and as you become more familiar with the tracks you can really feel a connection with the music.

I must admit I’m not a big follower of music but I was pleasantly surprised at how many of AVICII’s tracks that I instantly recognised. Playing the game has allowed me to explore more of his music and find plenty of new favourites.

The music and the visuals on offer are more than enough reason to keep coming back to this title. Highscore chasers will love competing on the online leaderboards and the high difficulty makes it hard to perfect each track. When you do make a mistake you know it’s your own fault and there’s an addictive quality here that makes you just want to jump back in for one more try.

Beyond the single player mode the game does also feature a multiplayer option. This takes place in split-screen and supports up to four simultaneous players. It’s possible to select any of the included songs and each player can choose their difficulty which is a nice touch. Sadly there’s no online multiplayer and this would have been the icing on the cake.

Overall I enjoyed AVICII Invector Encore Edition far more than I was expecting. Arguably this title is likely to be enjoyed by AVICII fans the most but there’s plenty here to entertain any fan of the rhythm-action genre. It turned out I was far more familiar with Tim’s music than I thought and there isn’t a bad track on here. Highly recommended.

In this article:Avicii, Featured, Hello There Games, Nintendo Switch, Wired Productions, Xbox One