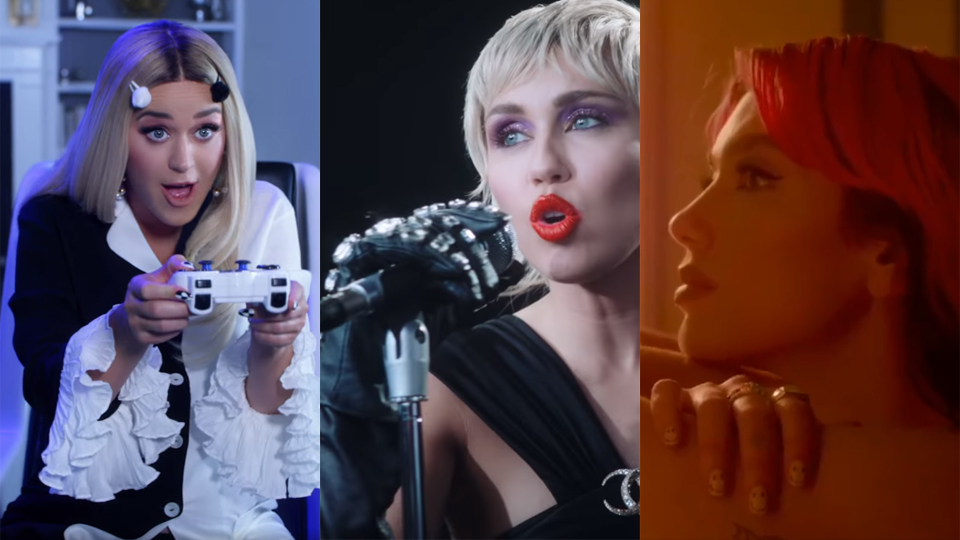 Pop fans are being spoiled right now as new videos have just dropped from some of pop’s finest; Miley Cyrus, Katy Perry and Dua Lipa featuring Madonna and Missy Elliott. Let’s have a look shall we?

The title track to Katy’s new album was released a few weeks ago and we’ve already had a clowntastic performance video for the track.  Today we’re getting the official video which sees Katy in Pierott Clown style pajamas carrying a cream pie from the kitchen when she happens upon a computer game called Smile.  Upon launching the game she chooses the Sad Clown character and is instantly transformed to look exactly like that character wearing a sequined beret, neck ruff and harlequin trousers.  Her on-screen game character faces a series of circus themed levels including kissing a frog who becomes a prince and looks suspiciously like Orlando Bloom.  For me Katy Perry is the artist that keeps giving in lockdown and has truly conjured another great piece of content in support of the album (also called Smile) which is out on 28th August.  Watch the video below:

Following last year’s Mother’s Daughter, Slide Away and her Charlie’s Angels theme song Don’t Call Me Angel, Miley has just given fans a brand new song called Midnight Sky.  It seems she’s adding a touch of disco to her catalogue which is bang on trend following the likes of Jessie Ware, Dua and Kylie who are all embracing elements of that sound this year.  The self-directed video sees Miley get naked (again) and roll around over what look like chewing gum balls, as well as a sexy black Chanel swimsuit and diamond studded gloves.  Watch below:

Despite all the covid related issues of 2020, Dua Lipa is having a great year.  Her album Future Nostalgia topped the charts and hasn’t left the Top 20 since release back in April.  At the end of August she is giving us a remix album featuring reworked tracks from the Number 1 album and some very special guests including Gwen Stefani and Mark Ronson.  Today we get a taster of what to expect as the track Levitating gets reworked by DJ/Producer The Blessed Madonna (Robyn/Celeste) and sees guest vocals from Madonna along with Missy Elliott.  Watch the new version below:

And in case you missed it last week…

She’s back and on a galatic disco tinge as Kylie channels her inner Studio 54 whilst riding a giant white horse in the video for the first single from upcoming album Disco.  Kylie has thrown glitter, sequins and effects galore and looks absolutely stunning in many different outfits including a sequined jumpsuit and black and white striped dress.  It’s a video best viewed in 4K to appreciate all the visuals.  Watch:

Which is your favourite?  Tell us @entfocusmusic