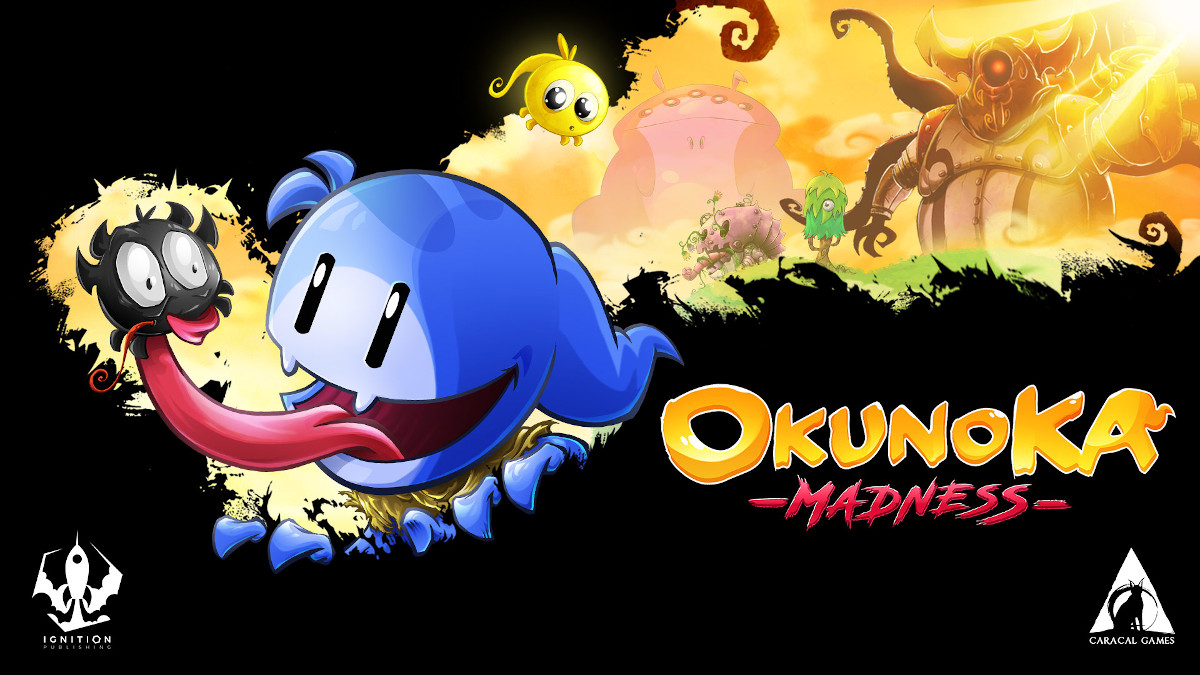 In 2018, an Italian indie team called Caracal Games Studio developed a game called OkunoKA for Nintendo Switch. Now they are bringing an updated version of the game called OkunoKA Madness to PC/Steam, PS4 and Xbox One. The game is a platformer designed for speedrunner fans and I’ve been checking out the latest Xbox build for this preview.

In OkunoKA Madness you play as KA, a blue hero who must save the world of souls from the evil hands of Os. The story seems fairly light and is told through some short cutscenes to set the stage. The first thing that grabbed me about the game is the gorgeous art which reminded of the wonderful Rayman Legends.

The game is split into three modes – Story, Madness and Time Trial. For this preview I’ve been able to tackle the first two worlds – Fairy Bugs and Desert Plains. Each is comprised of 20 levels with the final one being a difficult boss stage. The game tasks you with navigating each level as quickly as possible to collect a little black creature. The gameplay is reminiscent of Super Meat Boy and the difficulty is also on par. KA can run and jump to avoid obstacles and can also wall-jump.

The initial levels are easy as it lets you get to grips with the controls but they soon ramp up in difficulty. It’s one of those games that punishes a single mistake with instant death. However, it doesn’t feel unfair and you know that each time you die you can only blame yourself. Each death leads to an almost instant restart which keeps you playing. I love these kind of games but did find some levels took me so many attempts I was close to rage-quitting.

Along your journey you gain access to special abilities. The first one I found let me activate and deactivate ice platforms. The second gave me the ability to do the same with fire platforms. Navigating the levels becomes tougher with these elements thrown into the mix. Not only are you pushed to go as fast as possible, with near pixel perfect accuracy, you also need to constantly rotate your abilities to remove obstacles or enable platforms. I found the abilities a bit fiddly but with practice I found my muscle memory eventually kicked.

Scattered through the levels are purple creatures which are often hidden in hard to reach places. If you like to collect things then you’ll likely need to play each level several times to get them all. Some levels also contain a Vortex that sticks around until your first death. Jumping through one of these takes you to a different world with limited retries. These levels are very tough and feature a cool silhouette aesthetic.

As mentioned this is a game that was designed for speedrunners. Not only is it good enough to beat a level, the game wants you to do it as fast as possible. Each time you successfully beat a level you are given a rating of A-F or S if you really ace your try. If you like this kind of challenge a single level can keep you happy for hours as you try to get the S rating and climb the leaderboards for bragging rights.

The purple creatures and S ranks are used to unlock extra characters. I unlocked two additional characters during my time with the game. These had different abilities to KA, for example, the second character is called Space Eater and can cling to walls instead of instantly sliding down them.

View some OkunoKA Madness screenshots in our gallery:

The final game promises over 100 levels and I can only imagine that they get harder. After story there’s also the extra Madness world that promises to be the toughest of them all. Finally there’s Time Trial that challenges you to race through all the levels in a single world in the fastest time.

OkunoKA Madness is an incredibly polished game that shows a lot of potential. To get the most out of it you really need to enjoy speedrunner games but platforming fans should also add it to their wishlists. If you love the punishing difficulty of games like Super Meat Boy then I’d say this is going to be an essential purchase.

EF Games will be bringing you a full review of OkunoKA Madness when the game launches on PC, PS4 and Xbox One in September.