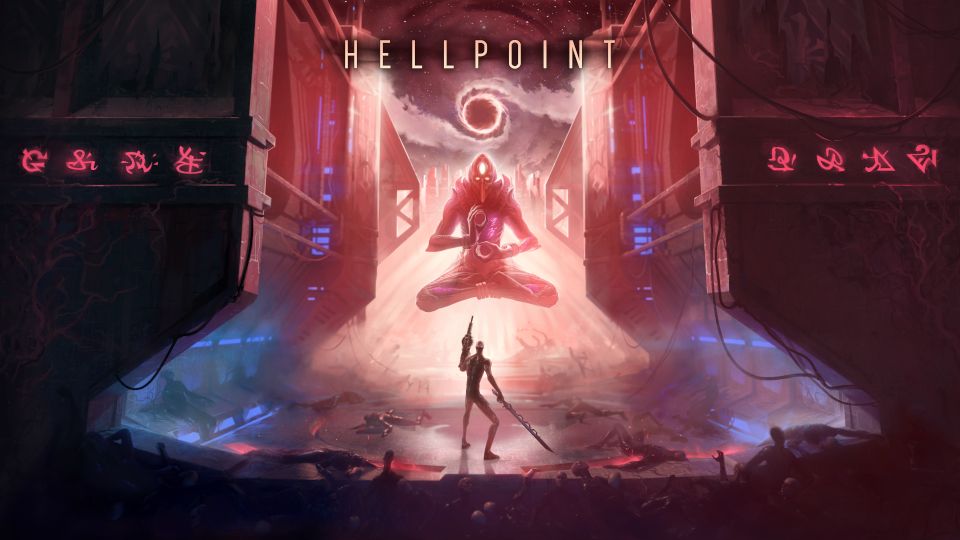 Hellpoint is the new Souls-like game from tinyBuild and Cradle Games. Rather than following the traditional medieval fantasy setting, Cradle have decided to place the game in a Sci-Fi setting. Based on Irid Novo, a derelict space station you will face twisted enemies and Godlike bosses as you attempt to unravel what went wrong aboard the Irid Novo.

You start off as an android-like being with a voice-over attempting to set the story. It is deliberately vague as you would expect in this sort of game and you are pushed straight into things with a very minimalist tutorial. Within minutes you’ll be doing battle and probably getting killed a lot in the starter area. The enemies start off pretty weak but can still kill you if you lose your concentration. When you die you’ll drop any axions (the in-game currency) on the spot and unless you manage to retrieve them you’ll lose them forever.

Exploring the game’s levels is one of the joys and frustrations of playing Hellpoint. The art style oozes a dark, heavy sci-fi atmosphere and enemy placement will keep you on your toes. On the downside, the levels can only be described as a labyrinth and you are given little to no indication of what you are supposed to be doing or where to go next. After beating the third boss I spent almost two hours wandering around aimlessly trying to find either the next boss or something that would move the game forward.

Breaches take on the role of the familiar bonfires in Souls games but they work a bit differently. At a breach, you can level up your character using any Axions you may have managed to keep hold of, teleport to a different breach or increase / decrease the level of difficulty in your universe. The fast travel is very handy but made frustrating as before you can teleport you need to use an item that is rarer than unicorn poo to unlock this ability at each breach. In your first playthrough, you don’t know where the breaches are and it’s frustrating to spend an item only to find another, better-positioned breach, two minutes later.

Combat is where Hellpoint truly shines, it can be fast and furious and flows much quicker than a traditional Soulslike game. You can mix up your combat style depending on where you’ve spent your Axions and I’ve seen players (in co-op) ranging from traditional sword and board to wielding giant blades bigger than their character. Dodging is crucial in Hellpoint and happens very quickly allowing you to reposition on the fly. I did find it difficult to get behind enemies though as they appear to use the same lock-on mechanic as the player.

Healing works differently than in other games and heavily influences combat. As you fight you fill-up charges for your healing item forcing you to be more aggressive. This gave combat a feeling of desperation at some points as I was low on health but needed to kill more enemies in order to be able to heal.

Character progression is satisfying and there is a high amount of customisation available. Not only can upgrade the bases stats of your character, weapons and armour but the weapons themselves also have their own levelling system. The more you use a given weapon you can unlock passive and active abilities giving you even more options in combat. For example, the dagger that I favoured granted a small max health increase, then a greater chance to break through shields and more. Each weapon has its own unique attributes to unlock encouraging experimentation.

Despite the great combat, I felt the boss fights were a bit lacking in, well anything to be honest. Yes, they were challenging at first but were very easy to learn and I found I was usually taking them down on the second or third attempts. I felt these encounters deserved a bit more love from the developers but as they stand the boss encounters felt a bit cheap and nasty.

Sadly the game was also plagued by bugs. I didn’t run into as many as other reviewers have reported but I still came across my fair share. Framerate tanks when in co-op mode and it feels like the game is out of sync, enemies will have empty health bars yet won’t die making things very frustrating. Other times your character would just fall through the floor making everything invisible and forcing me to quit the game.

Overall, Hellpoint was pretty good but not amazing. The combat is fantastic and varied but the performance issues and aimless wandering really let things down for me.

Hellpoint was reviewed using a digital code provided by the publisher