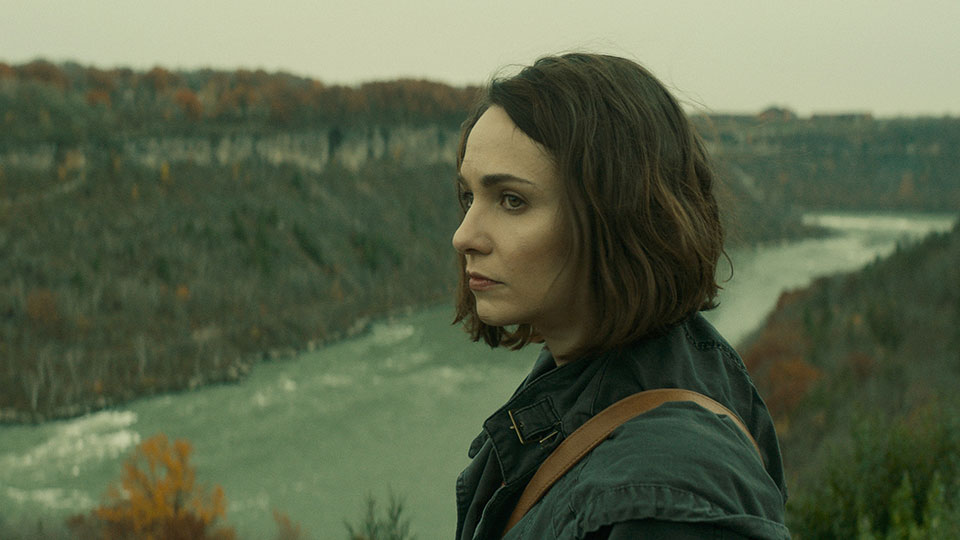 Abby (Tuppence Middleton) returns to her hometown of Niagara Falls following the death of her mother. Reuniting with her sister Laure (Hannah Gross), Abby tries to settle her mother’s estate, which includes a dilapidated motel that the family ran. Haunted by the vague memory of witnessing the kidnapping of a young boy when she was a child, Abby starts to obsess over what she saw and sets out on a journey to discover the truth.

Disappearance on Clifton Hill is a psychological thriller that revolves around a mystery that unravels via an unreliable narrator. It’s established from the start that Abby is troubled and it doesn’t take long for the strained dynamic to unfold between Abby and her sister, with the two lacking trust in one another. Whereas Laure is married and settled, Abby is still desperately searching to find herself and uses the memory from her childhood as a reason to not face her problems head on.

The fragmented memory of the kidnapping dominates the plot as Abby turns investigator with a little help from local podcaster Walter (David Cronenberg) to find out what happened to the boy she believes was kidnapped. She recruits Laure’s husband Marcus (Noah Reid) to help her and her search catches the attention of local millionaire Charlie Lake (Eric Johnson) and leads her to the door of two circus performers.

Director Albert Shin, who co-wrote the screenplay based off his own experiences as a child. He tries to misdirect the viewer plenty of times over the duration of the film but sometimes that results in the film feeling very muddled. There isn’t a hugely strong narrative past the bare bones story and we don’t get to learn very much about the colourful characters that live in the town. Schitt’s Creek star Noah Reid is criminally underused too in a small role.

British actress Tuppence Middleton gives a strong turn and she’s the film’s saving grace. Her performance is intense and dramatic, and she makes for a very convincing troubled young woman. She’s actually better than the material she’s been given to work with and if nothing else, you’ll remember her once the film’s end credits arrive. David Cronenberg is fun too playing a local oddball, the kind of role he does best.

Disappearance at Clifton Hill isn’t the clever thriller it thinks it is but it is a solid enough watch. If you can forgive the muddled plot, there’s plenty of atmosphere that’s built up. The film is really a showcase for Middleton and she’ll undoubtedly graduate to better roles than this in the future. Disappearance at Clifton Hill is perfectly serviceable but it’s not going to blow your socks off.