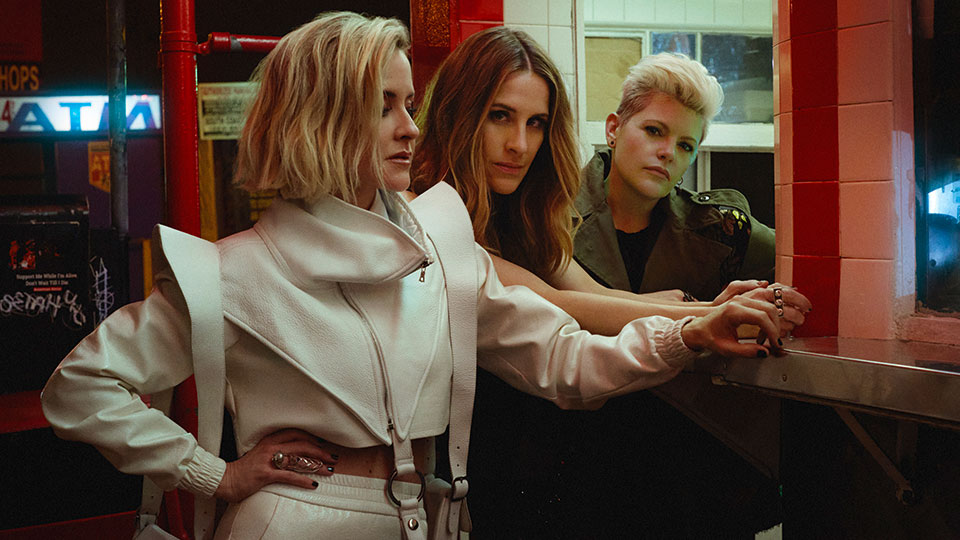 14 years have passed since The Chicks, known as The Dixie Chicks until recently when the band changed their name in the light of the recent Black Lives Matter protests, released their last studio album. Following the release of Taking The Long Way, The Chicks – Martie Maguire, Natalie Maines, and Emily Strayer – have toured intermittently and teamed up with Beyoncé and Taylor Swift, but they haven’t released any new music that record. The wait is finally over as Gaslighter arrives, a little later than planned thanks to the pandemic, but what’s a few more months when fans have waited 14 years already?

The fiery lead single, and title track, Gaslighter was the first taste of the album and it showed that The Chicks haven’t lost their edge. If anything, the experiences they went through after their infamous 2003 backlash, has made them more unapologetic than ever. The song hints at infidelity, a theme that runs through the album, which is no surprise given much of the material here was written as lead vocalist Natalie Maines went through a bitter divorce with her husband of 19 years, actor Adrian Pasdar.

Unsurprisingly Pasdar requested access to all unreleased Dixie Chicks songs during the divorce battle claiming that if songs had been written about him, they would breach a confidentiality clause in their pre-nup agreement. Having now listened to the album from start to finish numerous times, it’s safe to say Pasdar doesn’t look great if these lyrics are indeed based on him.

That aside, I was a little worried about this record prior to its release. While there’s no doubt that Gaslighter is up there with The Chicks’ finest songs, I was less enamoured by the boundary pushing Julianna Calm Down and March March. Hearing them in the context of the album, they make much more sense and Gaslighter, the album, is a marriage of The Chicks we know and love with a modern twist in places.

Once Gaslighter kicks the album off, things get very interesting on Sleep At Night. The banjo-driven, beat-laden track is a confessional that sees Maines revealing that she had to take a call from the husband of the woman her husband cheated on her with. The lyrics don’t hold back as she accuses him of leading a double life but she admits she knows her situation isn’t one that’s unique to her. The revelations carry on as Natalie says she met her ex-husband’s girlfriend when he brought her to a Dixie Chicks show at The Hollywood Bowl. Even more uncomfortable is the lyric ‘I joked that you could love me as long as you don’t love my man’. Ouch.

We get more glimpses across the album such as on the fragile Everybody Loves You as Natalie sings about hating her ex and being frustrated that everyone loves him. For Her is an anthem of resilience and refusing to let your voice be silenced while My Best Friend’s Weddings recounts Natalie’s first meeting with her ex at the wedding of bandmate Emily Erwin (now Strayer) to Charlie Robison. The incident on the boat that’s referenced in Gaslighter is expanded on unflinchingly on the punchy, and plain spoken, Tights On My Boat.

March March continues The Chicks’ reputation for making their voices heard and it tackles the current volatile climate that’s apparent in much of the world. The trio give a rally cry to their fellow women to make a stand and affect change. Young Man is a slice of pure traditional Chicks as Natalie appeals to her sons to find their own way in life and remember she’s done everything she could do for them.

The best moments are saved for the final two tracks. Hope It’s Something Good is the best showcase of the trio’s trademark harmonies and it finds coming to terms with the breakdown of Natalie’s marriage. The revelations come thick and fast on the song as they sing, ‘if you’re gone, I hope it’s really worth it’. Closing track Set Me Free pulls at the heartstrings as Natalie pleads for her ex to sign their divorce papers and let her move on. Natalie’s vocal is so emotive and the lyrics are so raw, it’s actually a little hard to listen to in parts.

Gaslighter is a much deeper album than the singles would lead you to believe. There’s a lot of heart, a lot of hurt and a lot of emotion across the album’s 12 songs. While The Chicks haven’t lost their edge, they showcase an even more vulnerable version of themselves than we’ve ever seen before. These songs capture one of the most painful times in Natalie’s life and it’s hard not to get swept away by the ordeal she’s gone through. With Gaslighter, The Chicks prove they’re still the best group in Country music and by god we’ve missed them.

In this article:Dixie Chicks, The Chicks