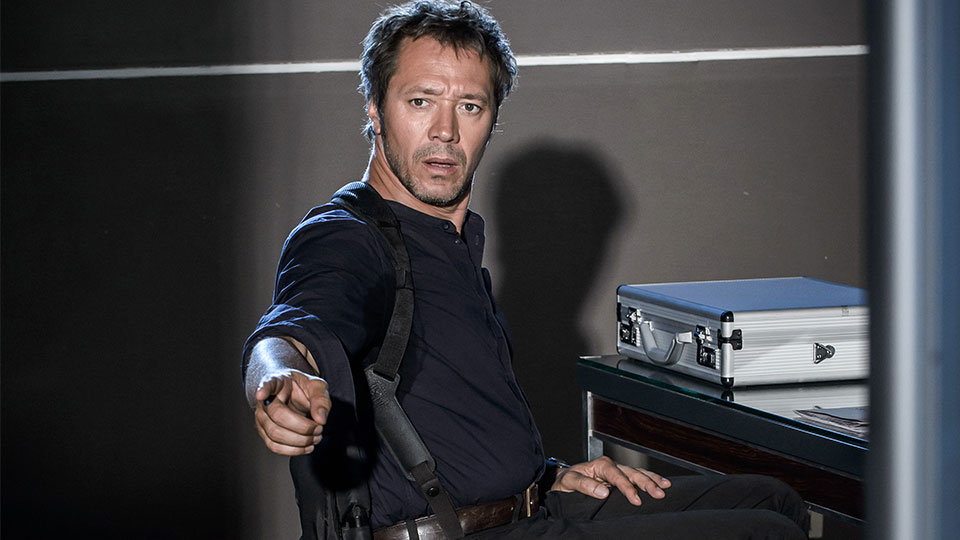 Bruno Debrandt stars once again in this lightweight French thriller as Detective Cain (simply known as Caïn in France). He is perhaps better known for playing Commissioner Brémont in Spiral – perhaps the finest French TV series ever. Detective Cain is a far more fluffy affair, but not without its charm. There are seven seasons of the Marseilles-based show in its native France, so it must be doing something right.

Cain is confined to a wheelchair, but doesn’t let this prevent him from being a super-sleuth, pursuing Marseilles criminal fraternity with a glint in his eyes and rapier wit in his tongue. He’s that typical maverick style of cop who doesn’t play by the rules and often upsets his by-the-book superiors; but always gets his man (or woman) and therefore winning the begrudging respect of his doubters. It’s all somewhat clichéd fare, to be honest, but a pleasant enough way to spend an hour. Each episode is a different story, so you can dip in and out without having to commit to something more challenging.

Working alongside Cain is the feisty Lucie Delambre (played by the beautiful Julie Delarme) and nerdy Borel (Mourad Boudaoud). Lucie and Borel are in trouble in the opening episode of the new season, having been involved in the death of an informant. They’re looking at suspension whilst the death is investigated, until Cain steps in and summons them in to join him in a kidnapping case that’s landed in his in-box.

The case involves a mother (who is also wheelchair-bound) and her teenage daughter who whilst out shopping are forced into a van in the car park by a masked man. Suspicion inevitably falls on the husband/father who is a dodgy gynaecologist with no viable alibi for the time of the abduction. Also under suspicion is his father-in-law, a wealthy man who dotes on his daughter and grand-daughter, and clearly thinks they’d be better off without his impoverished son-in-law. Could he be trying to frame his daughter’s husband?

There are lots of red herrings, suspicious characters and blind alleys as our detectives try to get to the bottom of the case. It’s all good fun – if you’re looking for “noir”, look elsewhere – and pleasing on the eye. The script is witty and nicely paced. And whilst the characters are a bit two-dimensional, it’s all good fun.

If you’re a fan of lightweight crime drama – Midsomer Murders, Dalziel And Pascoe, etc – and fancy a bit of eye-candy set in the south of France (and who could blame you), this might be right up your alley.

Walter Presents: Detective Cain Season 2 is available as a full boxset on All 4 from today (Friday 10th July 2020).

In this article:Detective Cain, Walter Presents