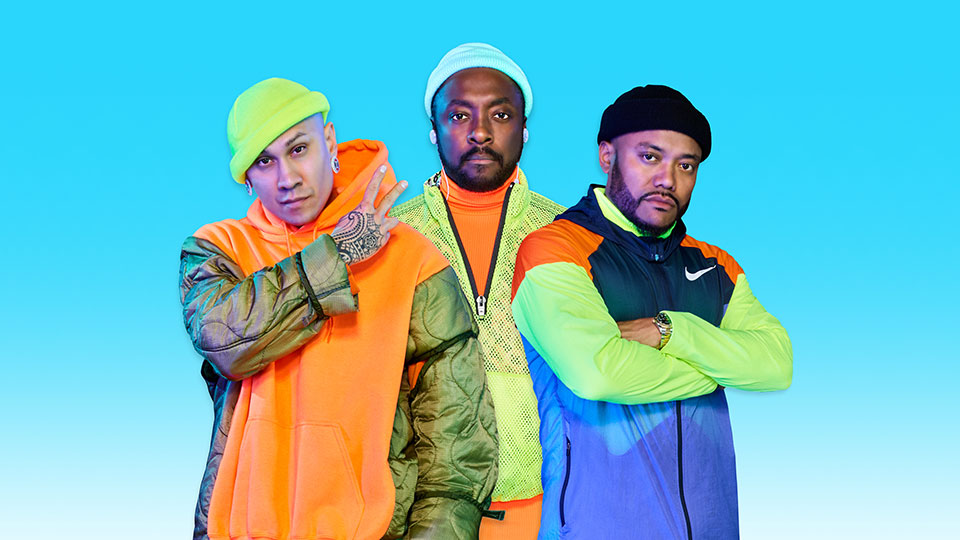 Black Eyed Peas launched as a trio – will.i.am, apl.de.ap and Taboo – in 1998 with their debut album Behind the Front. In 2002 they added vocalist Fergie as a fourth member and it was their 2003 album Elephunk that turned them into a global phenomenon with hits such as Where is the Love?, Shut Up and Hey Mama. In 2016 Fergie decided to depart from the group and in 2018 they recruited J. Rey Soul as a vocalist, even though she’s not given the billing as a fourth member like Fergie was. Following the disappointing performance of their last album Masters of the Sun Vol. 1, Black Eyed Peas changed record labels and today they release their first album under their new deal.

Translation marks a turning point in the career of Black Eyed Peas. They hadn’t had a hit since 2011’s Just Can’t Get Enough but 2019’s Ritmo (Bad Boys for Life) with J Balvin catapulted them back to the top. The song, which samples Corona’s 90s hit Rhythm of the Night, has brought the group back to prominence and given them the perfect platform to launch their new album. For Translation, Black Eyed Peas have embraced the sound that’s dominating the Latin charts right now mixing reggaeton, trap, hip-hop and dance. The album features the cream of the Latin crop with the likes of Maluma, J Balvin, Ozuna, Shakira and Becky G all appearing.

As evidenced by current single, and Latin chart topper Mamacita, the group has rediscovered its knack for a catchy hook. Ozuna and J. Rey Soul feature on the track, which samples Madonna’s La Isla Bonita. It’s repetitive chorus and familiar beats are designed to lodge in your brain and it works. This is a song that’s hard to forget once you’ve heard it. Teaming up with Ozuna, one of the biggest stars in Latin music, is a genius move and it’s paid off handsomely.

10 of the album’s 15 tracks include features and often that would mean an artist loses their identity. That’s not the case on Translation. Black Eyed Peas utilise their features perfectly allowing the artists to bring their flavour but never overwhelming the group’s own distinct sound. The playful Vida Loca featuring Nicky Jam and Tyga samples MC Hammer’s U Can’t Touch This giving it a reggaeton makeover that sounds disastrous on paper but actually sounds pretty amazing.

One of the standouts on the album is Girl Like Me featuring Shakira, which is a dancefloor anthem that will surely get its time in the spotlight over the run of this album campaign. The Maluma featuring Feel the Beat, which samples Lisa Lisa & Cult Jam’s Can You Feel the Beat, is the best track on the record, combining the perfectly produced beats of the Black Eyed Peas and the swagger that the Colombian superstar brings to every track. Maluma is one of the biggest stars in the world right now and he’s yet to put a foot wrong.

With so many features on the record, you’d be forgiven for worrying that the tracks without guests might be disappointing. That’s not the case here. Celebrate, which samples Miami Sound Machine’s Conga, is a soaring club anthem whereas I Woke Up sounds like a mash-up of Drake and Bad Bunny. Get Loose Now is a huge track that pumps along with urgency and makes you long for the days you could get out on a dancefloor and shake your booty. Album closer News Today is one of the most surprising tracks with the tempo slowing down a bit as the group raps about the state of the world today with some very timely lyrics inspired by Donald Trump’s random ramblings.

Translation is the best album that Black Eyed Peas have released in a very long time. I admit, I’d pretty much written them off after the departure of Fergie and I can now say I was wrong. Translation has its finger on the pulse of Latin music and it serves up banger-after-banger. I predict this is the album to put Black Eyed Peas back on the top and it has so many singles on it, it could have a very long shelf life too.