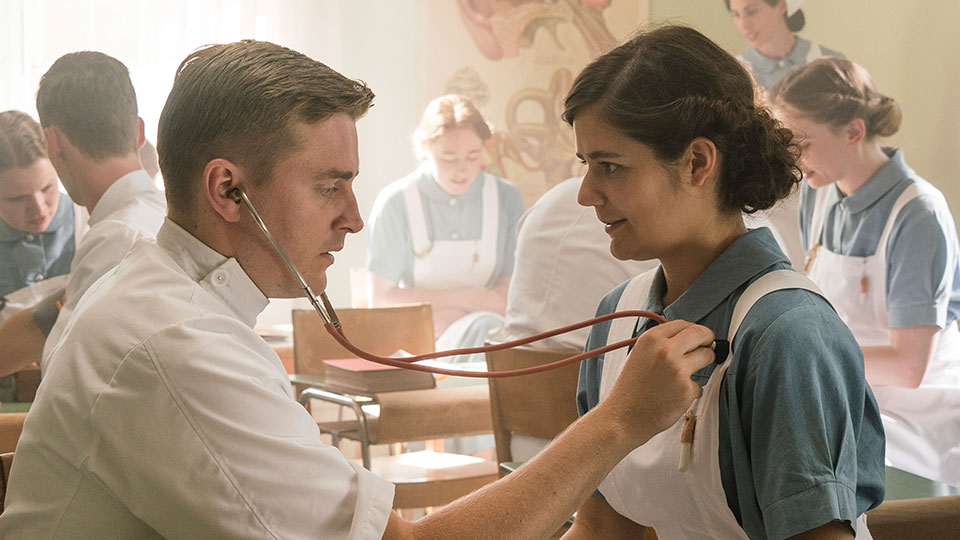 Set in 1950s Denmark, New Nurses is yet another string to the Walter Presents bow. It’s the story of a post-war Denmark struggling to cope with insufficient numbers of nurses and taking the radical and controversial decision to recruit men to be trained into the profession – a role that had been exclusively female up until that point.

We follow the adventures of one such recruit – Erik – who returns from his army duties and decides to try to enrol at Fredenslund Hospital, much to the disapproval of some of his family and friends. The matron at Fredenslund is a family friend, so Erik convinces her to include him in the first batch of recruits, despite the fact that they’ve already selected their full quota of men.

Erik soon realises that he’s woefully out of his depth – he has no reference books and virtually no medical training – and he soon finds himself expelled for failing the opening test. But thanks to his friendship with the matron, he gets a second chance to prove himself.

The main storyline revolves around Erik and Anna – a wealthy and spoilt young woman who is also recruited as a nurse at the hospital on the same day. Their paths cross when Erik and a couple of the other male recruits meet Anna and her father as he drops her off at the hospital. One of the male recruits end up a patient in the hospital when he injures himself carrying in Anna’s extravagant (and heavy) furniture.

I was reminded throughout of Call The Midwife, which is a medical drama set in a similar (slightly later, perhaps) time frame. Admittedly, CTM focusses on female characters in the main, whereas New Nurses (Sygeplejeskolen in Danish) is perhaps more centred on the male characters, as their arrival in a female-dominated world is the main hook of the storyline. But the feel of the two shows is not dissimilar.

It’s a sweet show. The characters are endearing. The nurses (male and female) are all well-meaning folk, prepared to give their young lives to curing and caring for the sick. The old guard – stuffy, by-the-book doctors and domineering and authoritarian sisters – are the pantomime villains, bullying the new recruits and treating them appallingly. You soon realise who you should be rooting for and who you should be booing.

It looks delightful on screen, too. The fashions, hairstyles, cars and even medical treatments are of a bygone age. And that all adds to the nostalgia trip. I’ve only seen the opening episode, but don’t expect too much Casualty-like blood and gore; this is more about the storyline of the new male nurses and Erik’s blossoming relationship with Anna.

As Walter and co continue to spread their wings, this is another welcome addition to the fold. Yes, it’s fluff – but charming fluff, nonetheless.

In this article:New Nurses, Walter Presents