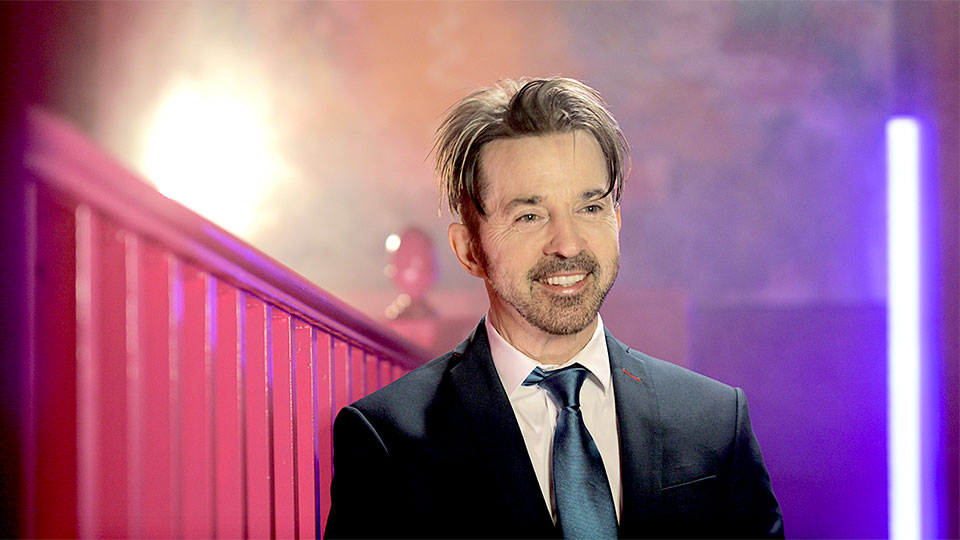 Limahl is perhaps best-known as the former frontman of Kajagoogoo and for his 1984 hit ‘The NeverEnding Story’, which featured in the smash-hit movie of the same name.

Today the English singer-songwriter makes his welcome return to music with Still in Love, his first new material in 8 years. The track is available to stream and download everywhere and it continues his knack for a catchy pop tune.

I caught up with Limahl to talk about his return, find out more about the new single and discuss his post-COVID-19 plans…

Hi Limahl. How are you today and how are you keeping busy during lockdown?

Hi, I’m doing my best to stay away from chocolate but failing miserably lol. I’m also trying to cut my own hair which is impossible, the hard bit is doing the back innit – that’s where the partner comes in handy, but be careful, self-haircuts can cause divorces I hear 😉 Hairdressers should now be recognised as key workers imo. Seriously though, I’m missing the gym but making up for it with cycling and working out at home. I find exercise really helps my mind as well as the body. Just before the lockdown started, I drove to Wigan to bring my lovely 82-year-old mother Cynthia to Hertfordshire to stay with me and my partner Steve coz we didn’t want her being alone for the lockdown. We haven’t killed each other yet lol. I’m sharing looking after mum with my sister Caroline who lives nearby.

Your new single is Still in Love. What’s the inspiration behind the track?

The inspiration behind the track was simply trying to look for that illusive magic moment when the harmonics of the instruments meld with the vocals and it hopefully comes together like a nice jigsaw puzzle.

Historically the world has 100 years of song melodies & lyrics, so today, musicians/songwriters/producers must dig deep to stumble on something special. I was not in the headspace of our protagonist in writing this song. He’s in that scary place we’ve all been to at some point in our lives where the heart is hurting badly. It’s not nice. But what an amazing feeling when you come through the other side and start learning to love yourself again. The verse feels dark but then there’s a kind of optimism in the chorus. I was hurt in love a couple times in my younger days (who hasn’t been) but am now in a great relationship with my civil partner Steve of 26 years.

This is your first solo music in 8 years. Why did you decide to release music now?

I was tempted back into the recording studio after three popular American TV shows used my music last year.

‘Too Shy’ was featured in Netflix’s ‘Black Mirror’ episode ‘Bandersnatch’ (their first interactive show). Then ‘American Horror Story’ also used ’Too Shy’ and actually had a guy playing Limahl in the storyline set in 1984 – I get bumped off by one of the supernaturals which apparently in cult circles, is quite the accolade lol.

Then ‘Neverending Story’ played a pivotal role in the season three finale of Netflix’s ‘Stranger Things’.

Monthly Spotify streams of the song went up from 300,000 to 1.5 million. So as u can imagine, it feels like a possible opportunity AND they don’t come along very often. As the Americans would probably say “u gotta grab it by the balls kid” !!

What plans do you have for new music moving forward? Are you working on an EP or album right now?

With COVID-19 it’s tricky to plan at the mo. Lockdown is certainly an opportunity to be creative though. I might have more music in the pipeline, watch this space . . . songwriting is a bit like learning to ride a bike or swim – once you can do it, it stays with you. Even today, I still write lyrics and phrases down if something pops into my head. I still get excited at the thought of arriving at a creative session where something doesn’t exist yet – then 3 hours later, something begins to unfold. It’s satisfying and thrilling.

You’re celebrating 40 years in the music industry. What would you say have been your highlights?

In terms of hit songs, ‘Too Shy’ & ’Neverending Story’ of course , which although are 35 years old, have gained even more value with age, like an antique vase for eg. I too have become kind of more valuable – the big retro festivals now refer to us as Heritage Artists, I like that lol. Highlights ? Hmm let me see . . . I remember meeting and sharing a cigarette with Freddie Mercury at his party in central London after a Wembley concert around 1983. Meeting Princess Diana in a line-up at a charity event at the London Hippodrome standing next to Boy George. And I’m only a local lad done good from a Wigan council estate.

What are the biggest challenges you’ve faced in your career?

Kajagoogoo splitting up meant that I suddenly had to find a new sound and a new creative team. That’s not easy. Kajagoogoo were talented musicians/songwriters. We had an energy, a creative synergy and I missed that at first. I missed the camaraderie and banter of being with the guys. BUT I didn’t have a choice – they called and fired me. They thought we were being labelled a teeny band and that it was my fault. Crazy eh ! With hindsight, they must have contemplated their decision and have since realised that The Beatles were a teeny band at first, as were Wham and Duran (and many others). Kajagoogoo were no’1 all over the world, we had it all at our fingertips and in the blink an eye, what took 5 years to achieve, they threw away. Thankfully I met the legendary producer Giorgio Moroder and collaborated with him on ‘Neverending Story’. That song (and ‘Too Shy’ of course) has kept the phone ringing for the last 25 years for all kinds of work reasons – gigs, TV shows, corporate shows, TV synch use, commercials, etc. ‘Too Shy’ was used in a UK Walkers Crisps TV advert and also for ‘Orange’ mobile, in France. ‘Neverending Story’ was used in the Swedish National Lottery. I actually sent Giorgio an iPhone video message for his 80th birthday last week. His wife Fransisca emailed about how she was planning to surprise him. They live in Beverly Hills and the two of them celebrated in lockdown. At 80, he probably didn’t fancy a big shindig lol. In my message, I said “I hope there’ll be flashes and dancing, that Fransisca will take his breath away and the partying will be neverending (alluding to three of his big hits).

If you could go back in time to give your younger self some advice, what would it be?

Don’t smoke. Read the small print. Call your mum every week. Pace yourself. Respect your body and sleep. I pushed my body for a while when working in Amsterdam at 25 years old, thinking I was invincible (the way youth often does) and ended up suffering with insomnia for about three months. IT WAS HORRIBLE. Never again did I disrespect my sleep pattern. Eat well and do some exercise and if you’re lucky and don’t get hit by a bus (which I nearly did btw in 2018 by half a second but that’s another story) you’ll have a long and prosperous life.

Your songs have enjoyed longevity and were most recently used in American Horror Story: 1984 and Stranger Things. How does it feel to know these songs are such an integral part of pop music history?

It’s absofrigginlutely fanflippintastic! For many Americans, the British artists from the early 80’s ‘new wave’ invasion, has a kind of cult status there. Acts like Soft Cell, Human League, Pet Shop Boys, Eurythmics, Culture Club, and Kajagoogoo are held in high esteem. In 2018 I toured there with ABC & Belinda Carlisle. I had an absolute blast and also got three days off in Las Vegas.

Which artists are you enjoying and drawing inspiration from right now?

Atm I’m enjoying on my Spotify: ‘Bust This Town’ by Stereophonics , ‘Mother’ by Charlie Puth, ‘Counting Stars’ by OneRepublic, ‘No Roots’ by Alice Merton, ‘Strong’ by Mark Kingswood, ‘Nice To Meet Ya’ by Niall Horan, ‘Colours’ by Black Pumas, ‘Trampoline’ by Shaed & Zayn, ‘Candlelight’ by Jack Savoretti, ‘Don’t Start Now’ by Dua Lipa, ‘Rolling’ & ‘Hero’ by Michael Kiwanuka, ‘Do It So Well’ by Example, ‘Tongue Tied’ by Earl, ‘Circles’ by Post Malone, ‘Like Sugar’ by Chaka Khan, ‘Lola’s Theme’ by Shapeshifters, ‘Giant’ by Calvin Harris/Rag n’ Bone Man. And finally, various tracks/mixes by Purple Disco Machine.

What other plans do you have for the year?

Well for starters, it depends what happens with the single. Apart from that, will try and steer clear of the dreaded Covid – then beyond that, who knows. I hope the lockdown eases slowly and then maybe we can all go to the seaside for little holiday. Steve and I really like Poole in Dorset. We usually take our bicycles and ride a lot. Besides, even if air travel does come back, who wants to risk sitting on a plane, a confined space, for 2-3 hours. Can u imagine if someone coughs, we’ll all be running for the escape door lol. No thanks. I’ll stay and enjoy the UK, which is lovely in Summer anyway. We’re members of ‘The National Trust’ and love visiting their properties which usually have stunning gardens. I hope and pray they’ll find good Covid treatments soon and then eventually a vaccine. I know people who’ve had HIV for years and now they just take one pill a day which keeps the virus at bay. I’ll keep dipping my toes in the creative water too. I’m generally an optimistic person.

Limhal’s new single Still in Love is out now and you can listen at https://ffm.to/stillinlove. Watch the music video for the track below:

Advertisement. Scroll to continue reading.
In this article:Limahl