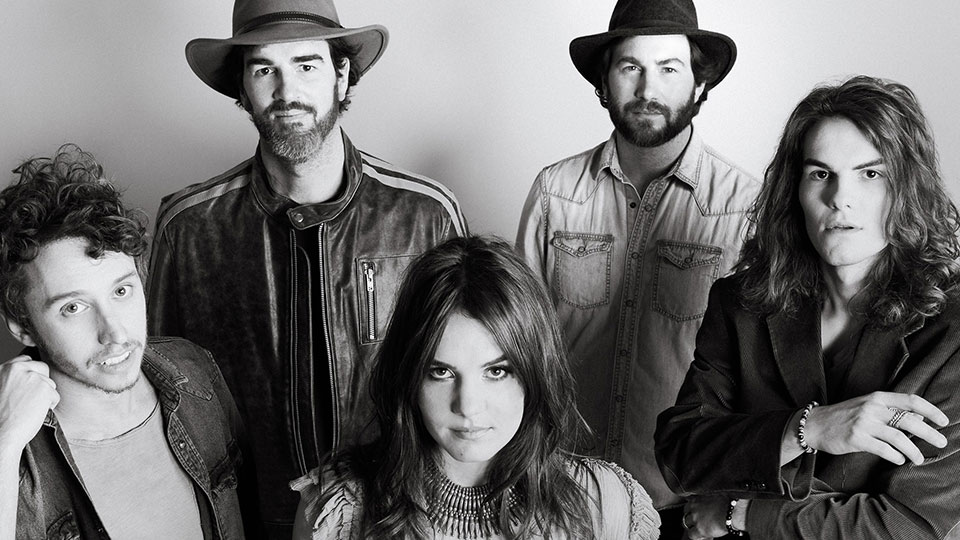 Credit: We the Kingdom

A multigenerational family of musicians, the band formed at a Young Life camp in Georgia. Don’t Tread On Me follows the soulful church sessions version of their smash hit Holy Water featuring Grammy-Award winning artist Tasha Cobbs Leonard, as well as a Live Acoustic Sessions EP which included acoustic renditions of some of their fan-favorites.

This week we are in the studio working on our new record that we will release in July! We’re so excited to share it with y’all!

You’ve just released your new single Don’t Tread On Me. What’s the song all about and what inspired it?

One night last year, after a long day in the studio, we headed upstairs to our family piano and started jamming in a minor, moody key. We started talking about how cool it would be to write a song that was a declaration of truth in the face of fear. This song ties in with Luke 10:18, which reminds us that the power of the devil was rendered powerless by the cross of Jesus Christ.

What’s the plan for new music for the rest of the year. Do you have an EP or an album in the works?

Yes! We have a few singles coming out soon and then our full length record in July!

Four of us are family and one is a close friend. Before we started We The Kingdom, we were all pursuing our own music careers. Of course, we grew up playing music around the house but there was never any intention to start a band with each other. It’s been a tradition of ours for the past several years to go play music for a YoungLife Camp in Georgia for a bunch of kids from Miami, Florida. We would go down there together just for fun because it’s been something that has fired us up and inspired us. About 3 years ago at this camp, we found ourselves writing a song by the camp hot tub just for fun.. We accidentally ended up writing this song called Dancing On The Waves and we all fell in love with it. It felt so magical when we wrote it that we ran around the hot tub shouting! It resonated with each of us in our individual journeys and our journey as a family (and close friend). After that, we joked about starting a band and taking this song out on the road… and now here we are and it just keeps getting better.

As a band you’re very hands on with all your music taking on writing and producing, as well as performing it. How do you get to a product that all five of you are happy with?

Haha good question. All of us are pretty particular and picky. If something can slide past all of us, that’s our litmus test that it’s probably a pretty good idea. It can be tricky finding something we all love, but it also is very refining and helps us find the gold.

What’s been the biggest challenge of being in a band so far?

Since most of us are family, it’s hard to hide our true selves (especially since we’re together all the time). We see each other through all the brokenness, the pain, the joy and have to choose to love and forgive anyway. It would be near impossible for us without Jesus, that’s for sure.

Which artists would you say have had the biggest impact on your music?

Since we all grew up in a different decade, we each pull from the decade of music in which we grew up. Here are some examples…

How are you managing to keep yourselves busy during quarantine?

Other than working on our record, we have been spending a lot of time with our families, watching movies, playing games, and being outside when the weather is nice. We’ve been on a huge disc golf kick lately.

Are you finding this time to be creative stifling or is it inspiring you?

We have found it to be extremely creative because we don’t have as many distractions. There’s more time to fill our brains up with good books and good conversations so that we can pour out creatively.

If you had to describe your music in one sentence, what would it be?

Someone wrote this for our Spotify bio and we like it: ‘An amalgamation of four different decades, We The Kingdom’s music embraces worship, rock, country, folk and pop, providing a textured sonic background for vulnerable, gritty lyrics.

We the Kingdom’s new single Don’t Tread On Me is out now. Take a listen to it below:

In this article:We the Kingdom