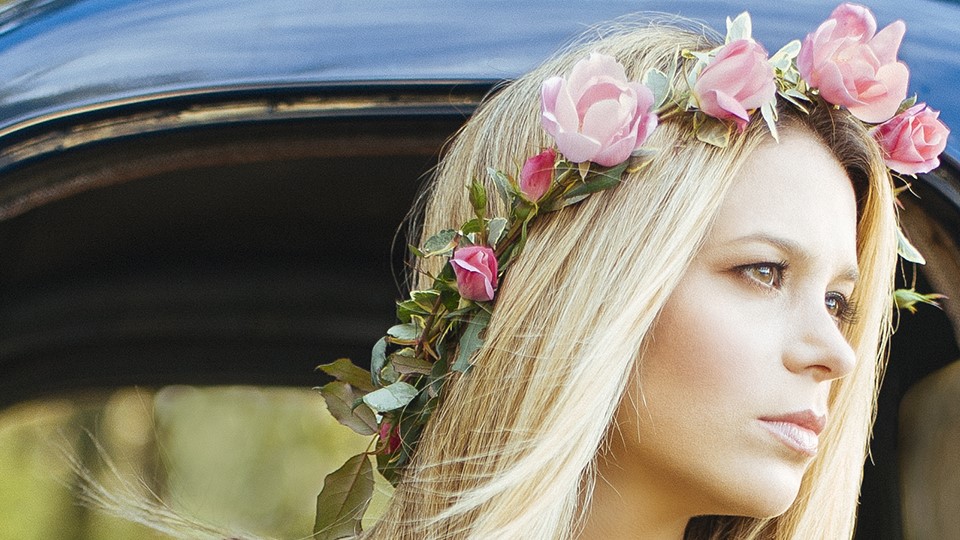 Originally from Miami, Ana Cristina Cash first began performing when she appeared on the Spanish-speaking variety show Sabado Gigante at the age of six. She signed to Sony’s Latin division aged 16 and has since performed at the 2005 Presidentual Inauguration, as well as singing the 2006 FIFA World Cup theme song You Can Change The World. Now she’s back with her new full-length English-language album Shine, recorded at the Cash Cabin in Hendersonville, Tennessee and produced by her husband, John Carter Cash (son of the legendary country stars Johnny and June Carter Cash).

The album opens with Renegade Rose, the latest single released from the album. It’s a driving track with strong rockabilly vibes, which sees Cash singing about two lovers on the run – a ‘brown-eyed bandit’ and a ‘bottle blonde’ in the style of Bonnie and Clyde. I loved the soulful, smooth quality to her vocals and the slight huskiness she brought to the song, as well as the playful energy of the song and how much storytelling she packs into the lyrics. The horns on the chorus add a nice retro jazzy touch and she hits a stunning huge note towards the end too!

That vibe continues throughout the album, particularly on the early section with tracks like the funky Tough Love Woman with its twangy rapid-fire guitar and fiery lead character and Hey Hipster, a searing attack on people who use their supposed individuality as a mark of coolness, which features shuffling drums and sarcastic references to ‘combat boots and pork pie hat’ before picking up into rock and roll-sounding guitars. The song is a great example of Cash’s ability to match throwback melodies with modern lyrics and she also hits some sweet high notes towards the end which really show off her vocal range.

But it’s not all rock and roll sounds here, with Cash drawing on a huge range of styles and sounds to create her unique sounds. Brand New Pair Of Shoes, the song she co-wrote with her late father-in-law Johnny Cash, contrasts light jazzy piano with kiss-off lyrics about leaving a lover, whilst Where The Muscadine Grows has a slightly poppy feel to it along with a big soaring chorus. Elsewhere, her version of Roy Orbison’s classic Dream definitely live up to its name and the piano-led Seminole Wind starts out with a soft, delicate quality before picking up into a rockier feel, with the traditional instrumentation adding to the song’s atmosphere. There’s even a classic country song in the shape of Tug Of War, a cinematic number where Cash challenges the woman trying to steal her man in a beautifully measured ‘don’t mess with me’ fashion.

One thing which particularly stood out to me throughout the album was Cash’s ability to bring her characters to life – whether it’s the couple of broke but fabulous nightclub performers in the flirtatious, intense Busted or the femme fatale from Outlaw Blues, a swaggering sultry number which sees Cash show off some serious belt and gravel in her voice. Perhaps the best example of this comes on Southern Roots, a classic swampy murder ballad which tells the story of a woman taking revenge on her no-good husband. It’s fantastically dark and I love the way Cash builds the tension throughout, as well as how the song highlights the depth and drawl in her voice towards the end.

For me the standout song on the record comes midway through with Broken Roses, which Cash released on World Mental Health Day last year. It’s a lush, piano-led song laced with strings, which creates detailed portraits of a couple falling apart due to mental health issues, and is utterly heart-wrenching. Cash puts so much into the tiny domestic scenes depicted in the lyrics and her delivery is incredibly powerful, building from the gentle verses to a huge second chorus and bridge then dropping away again to finish on an almost a capella note. It’s an incredibly powerful song and shows her skill as both a vocalist and lyricist. I also loved Fixed To Fall, which has a Western swing feel to it and warm, rich vocals alongside the themes of faith and steadfastness -as Cash’s character waits for her lover to come home. Although the song was recorded prior to the current coronavirus pandemic, the chorus line of “there’s precious souls that need you more than I do” feels particularly poignant right now.

The album closes with The Cost Of Love, which to me feels like coming full circle from the opening track. Its lively, galloping rhythm is balanced out by Cash’s powerhouse vocals, along with fuzzy horns and plenty of sass in her delivery as well as a killer guitar riff. I feel like it really sums up the style of the record and certainly provides for a dramatic ending that leaves the listener wanting more.

Overall Shine is a strong record for Ana Cristina Cash, showing off her skills as a storyteller and creating strong character portraits, as well as acting as a showcase for her incredible vocal range and that she’s versatile enough to turn her hand to a variety of musical styles. When I spoke to her recently she mentioned that this is the record she’s been wanting to make for a while and feels the most true to where her music is right now, and for those who haven’t heard her before it’s a fantastic introduction. I’m looking forward to hearing more from her soon!

Advertisement. Scroll to continue reading.
In this article:Ana Cristina Cash