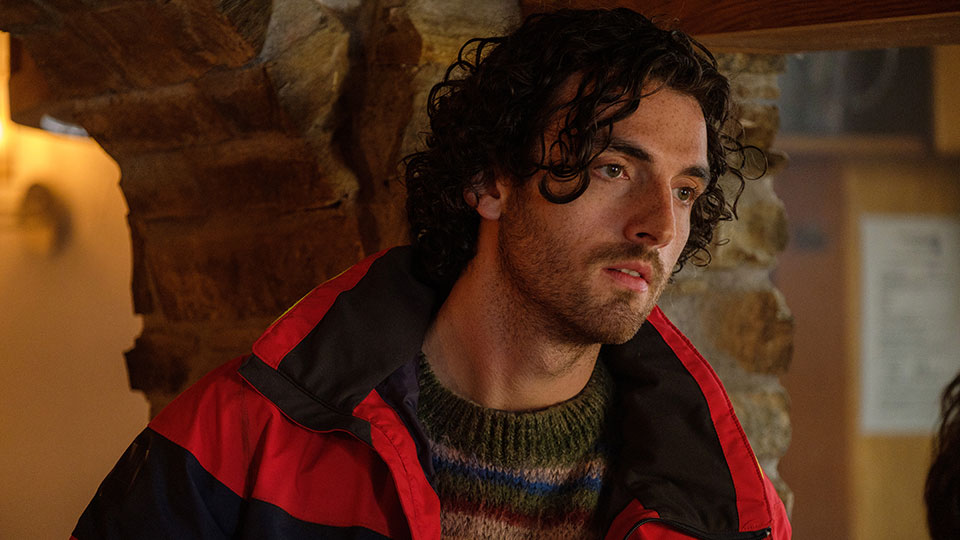 Lancashire born actor Arthur McBain is currently entertaining us on a weekly basis as part of the the ensemble cast of ITV’s breakout hit series The Trouble With Maggie Cole.

Starring opposite a star-studded cast that includes Dawn French, Mark Heap and Julie Hesmondhalgh, Arthur plays Alex Myer, a young man that has returned to the seaside town of Thurlbury in a bid to prevent his past from catching up with him. The penultimate episode saw Alex heading down an even darker path and the series finale on Wednesday promises to be explosive.

I spoke to Arthur earlier this week to talk about being part of The Trouble With Maggie Cole, find out what we can expect from the final episode, and to discuss how he’s keeping himself busy during lockdown…

Firstly, are you surviving self isolation and lockdown?

I am surviving, yes. I’ve got a very nice hammock on my terrace so actually, it’s kind of like a long holiday.

Let’s talk about more positive things. The Trouble With Maggie Cole reaches the end of the series on Wednesday night and over its run it seems to have really connected with viewers. How do you feel about the reaction the show has had?

I don’t know what the isolation has been doing to television, I haven’t seen what the ratings are like, but the response to the show has been absolutely fantastic. I do think that it’s probably got something to do with the Cornish countryside. People in this country just absolutely love Cornwall and they love seeing it on their telly. At the moment when everyone’s stuck inside, I suppose it feels a little bit like a holiday. It’s been very nice seeing the response it has been getting. This whole being stuck inside thing can actually give you quite a lot of homesickness, which feels ridiculous considering you’re stuck at home, but it can feel like you’re away from home because you can’t see all the people you normally see and you can’t go about your usual routine. The show, itself, feels quite quintessentially British so maybe in some way, it’s making people feel a bit of normality.

One of the things that I really like about this show is that it really picks up on just how dangerous not only gossiping is, but social media too. Social media is so much in the headlines and we’re talking about it all the time. Tell me a little bit more about how the show’s dealt with that side of things…

Yeah, it’s very interesting. Ben Gregor, the director deliberately made the show, with regards to what it looks like, feel as if it’s in the days pre-social media. That’s why you’ll notice that nearly all of the cars in the show are kind of a little bit retro. I think that that was a deliberate point to show that actually people are people regardless of where they are and what kind of situation that they’re in. The minute you put social media on top of that, it just makes everything explode. If it all took place in a world pre-social media, it would be a storm in a teacup. That’s what we see and then they add on to that the social media aspect, and suddenly it makes everything so much more intense.

In the show you play Alex Myer, a character that is being chased for debts that he owes. We saw in the penultimate episode that his situation is getting dire as he desperately tried to find the money and discovered that Kelly and Neil had burnt it. What can we expect from Alex’s storyline in the final episode?

Oh, it’s really difficult without giving it away. People can expect the whole thing is x10 really for the last episode. Alex hits just about the most desperate place that he possibly can and has to somehow find his way back from that. The next episode shows Alex in the direst situation that he is going to experience this series. There’s lots of crying acting (laughs).

When you read the script for this show, why did you feel that you wanted to play Alex?

It’s a part that is very rare to come across as an actor, particularly a young male actor. You don’t get storylines where you’re in a position of vulnerability. Quite often parts for young men are very sort of displaying lots of strength and power. Actually, this part is someone who is trying to hold it together but is incredibly, incredibly vulnerable. It’s quite rare that is to come across so that was something that I got very excited about at the beginning. To be given the opportunity to play someone who is struggling, really struggling, that was really lovely. I’m in love with Cornwall. I go there most years for my holidays. I just love the place. Getting to be there during the summer, as well as working on a great part, in a great series and also getting to work with people like Vicki Pepperdine and Mark Heap, and obviously Dawn French, it’s a bit of a dream come true of a part. However, having said that, the idea that I got to pick it… there’s a saying in the acting world which is you don’t pick the parts, the parts pick you and I think that is true. This part came along and it just seemed to work and fit together so that was very nice.

The cast for this show is incredible with so many familiar faces but you don’t actually get to share any scenes with Dawn do you?

No, I do none. I have no scenes with her. The majority of my filming days I was just by myself in my car (laughs). I’ve got a lot of scenes in that Land Rover Discovery. I was on set with (Dawn) a lot. We’d share a lot of the same locations so she’d be coming off set one morning as I’d be going on or I’d be coming off as she’d be going on so I saw everyone. Even though there’s lots of disparate storylines. I know every single one of the actors pretty well, I think, because there was a real sense of company and community there even if you weren’t filming with that person, we still met and we still saw one another and we were all down in Plymouth together feeling as if we were part of a big family.

I do feel like I can say I worked with Dawn French even though I haven’t in the most strictest sense (laughs), I feel like I have because I’ve still learnt from her. The thing about Dawn is that she nurtures such a wonderful company mood. Towards the end of the shoot, she invited everyone – the cast and crew – absolutely everyone involved in the show to have Sunday dinner at her house, which is something that she doesn’t have to do. Given that she’s the lead character, and also an executive producer on it, I think it just shows that she cares a lot about creating a lovely working environment and that ultimately brings the best out in people. Every legend that I’ve managed to work with has been like that so I think it’s a really good quality to her.

Beyond acting you have your fingers in so many pies. You’re in a rock band, you write children’s books, you have your own podcast… what will you be focusing on now that Maggie Cole is coming to an end?

Well, I’ve got all sorts of projects. I was told off by my principal at drama school (laughs). He said I was going to be a jack of all trades but master of none. At the moment I’m learning how to make clothes. I’ve got a sewing machine and I’m currently working on launching a brand (laughs) but that’s a long way off. My kid’s book In the Dead of the Night came out last September in Australia, which was the first place it was available, is being released in Korea next. I believe that is still going ahead even though the coronavirus is putting a halt to people going shopping for books in a physical way. It will still be being released over there so that’s great and something to be very excited about. The band, we are recording an EP at the moment. We were meant to be in the studio right now, as we speak, but obviously we can’t do that so we’re all setting up recording studios in our own flats and houses, and are recording it remotely, which presents itself with many difficulties but actually, I think we’ll end up with something quite special. The podcast, we did one season of it last year, that came out, and we are currently over halfway writing the second series. We’re doing it all by Skype so we’re writing the second. Actually everything is bubbling away and I’m working very hard.

You’re not going to be short of things to do then are you while we’re trapped at home?

The Trouble With Maggie Cole concludes at 9pm Wednesday on ITV. Arthur’s children’s book In the Dead of the Night is available now. For more information on his band Midnight Mouth follow them on Twitter @midnight_mouth and listen to his podcast At Your Peril at https://www.stitcher.com/podcast/at-your-peril.

In this article:Arthur McBain, ITV, The Trouble With Maggie Cole