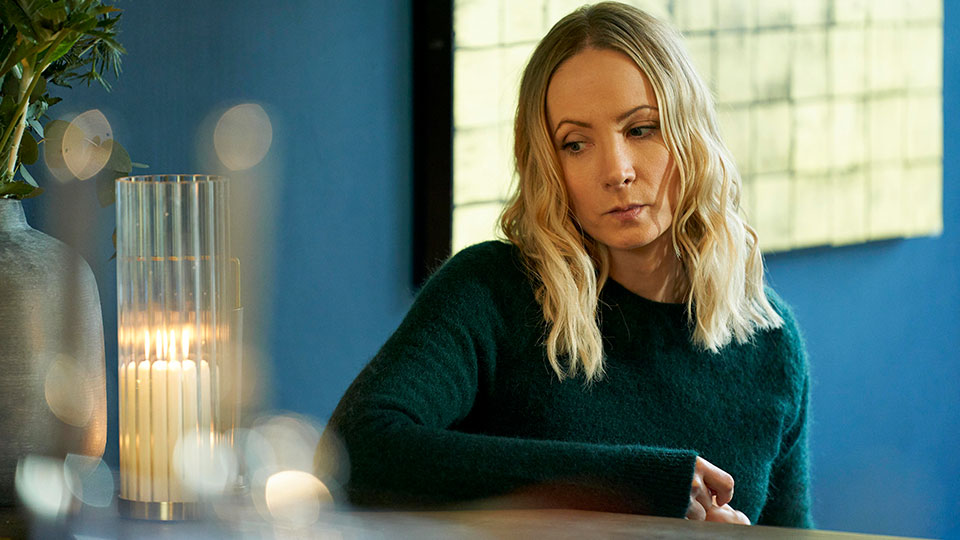 Ollie (Sam Spruell) was late to meet Andrew, who wasn’t very happy. Andrew handed over a flash drive to Ollie and told him that it contained files about Rory’s (Danny Webb) son Greg (Jack Colgrave Hirst). Ollie expressed his panic about being caught up in the middle of Andrew’s plans, and Andrew reinforced that he wanted to frame Laura for his murder and fake his death.

Growing tired of being controlled, Ollie pointed out that he could kill Andrew and that would end the nightmare. Andrew told him that he’d made arrangements to ensure the video came out and Ollie threw him up against the shipping container wall.

Laura and Katy (Zoë Tapper) tried to bribe the receptionist at Ollie’s hotel and they discovered that he had checked out. They also learned that Luke had visited Ollie before he left the hotel.

The sisters paid Luke a visit and he was burning his father’s belongings. They asked him for details about Ollie to try and find out his identity. Luke explained that he’d had a call from Ollie asking to meet so he could share information about his mother’s death. When Luke arrived for the meeting, he said no one was there.

As Luke refused to co-operate, he continued burning Andrew’s belongings and Laura advised him to leave his father’s actions in the past. Luke apologised to Laura on behalf of his father and she told him he had no need to. As they left, Luke called Ollie and told him that Laura and Katy were looking for him. We then saw that Ollie was the headmaster at a school.

Chatting in the car, Katy suggested that Luke might have killed his own father. They then reminisced about a boyfriend Laura had when she was a teenager and Katy revealed that she’d dobbed her sister in to their father, causing her to be grounded for 9 months. Katy apologised for hurting her sister and the two seemingly reconciled. They saw Luke come out of his house and Laura and Katy went inside to investigate, finding keys under a garden gnome.

In the garden they searched through the boxes of Andrew’s things and found a magazine with a picture of Andrew and Ollie, finally learning his true identity.

Jumping back to Andrew and Ollie in the shipping container, Andrew asked Ollie to pick up his car, which had his money in it. Andrew assured him if he did this last thing, he would be free. We then saw Ollie pick up Andrew’s car key and go to check on Luke, who had been discharged.

Laura called Vanessa (Shelley Conn) to ask her for a favour and they were parked outside of an airport. Vanessa met with Karen (Katherine Kelly), who reminded her that she was already in a lot of trouble.

Returning to Andrew and Ollie, Ollie delivered the car and the money as Andrew created a crime scene inside the shipping container. Ollie had a knife in his hand, which we were made to think he was going to use on Andrew but he actually gave it to him as a murder weapon. Ollie then told Andrew that Luke had been discharged from hospital. Andrew didn’t believe him so he Ollie told him to call him.

Karen waited outside Luke’s house and when he returned she spoke to him about a call he’d received on the night his Dad died. Luke claimed that he didn’t remember who the call was from and Karen asked if he’s seen his father before he was murdered.

We saw Luke meeting his father on a basketball court. Andrew tried to hug him but Luke pushed him away. Andrew tried to claim that people were trying to turn him against him and Luke became angry, telling his father that he wanted to hear him tell the truth. Andrew still lied to his son’s face and Luke became more agitated. Luke told Andrew that he is the one that should be dead. Andrew offered him the knife that Ollie gave him and told him to kill him as he couldn’t live with his son not believing him.

Luke didn’t share any of that information with Karen and returned to his home, watching her leave through the front window.

Continuing on their mission, Laura and Katy tracked Ollie down to the school that he worked in. They walked straight into his office and Ollie pretended not to know who Laura was. Laura told Ollie that Rory and Greg were going to turn themselves in and she warned him that he was going to be found out.

Laura grew increasingly agitated but Ollie refused to admit to anything. He opened his office door and told them to leave before he called the police. Before she left, Laura said she was looking forward to seeing his world fall apart. Laura’s claims rattled Ollie and he called Greg threatening him if he turns himself in.

It was then revealed that Ollie blackmailed Greg to force Rory to switch the sat nav in Laura’s car. Ollie offered Greg the money from Andrew and it was then revealed to the viewer that Rory and Greg had come clean to the police, and the call was being tracked. Karen called Laura and it turned out that they had been working together.

The police arrived to arrest Ollie for blackmailing a police officer. Laura and Katy watched as he was taken away and put in a police car. They embraced as Laura broke down, believing that her nightmare was finally over.

At the police station Ollie refused to talk and Karen told him she wanted to know about his meeting with Luke. We saw the meeting unfold as Ollie told Luke that there was a recording of Luke’s mother. Karen revealed that Luke contacted her to tell her what had happened. Ollie continued to plead with Luke to destroy the recording and Luke agreed to look for it. Karen told Ollie that Luke didn’t believe what he’d been told and he found the recording, which was of Ollie, and he handed it over to the police.

Ollie tried to deny it and Karen told him that it was motive enough to arrest him for Andrew’s murder. But did he actually do it?

News of Ollie’s arrest broke on the news. Laura and Katy shared a drink together in a pub and the sisters finally reconciled. Laura turned the conversation to Liam and Katy admitted that she didn’t get to choose what happened to their marriage.

Vanessa visited Rory and told him that the charges against Laura had been dropped. Rory admitted he’d done the right thing too late and pondered how much time he would serve for his actions. He apologised to Vanessa for undoing all the good they had done when they were partners but he said he would do the same again to protect his son. Rory invited Vanessa inside for a drink and she accepted.

Laura spotted Karen outside the pub and went to speak with her. Karen was smoking and asked Laura if she had time for a stroll before revealing that she knew what had happened to Andrew. She told Laura that she believed Ollie had murdered Andrew because he had leverage over him.

Karen then dropped the bombshell that she still thinks Laura was the person who killed Andrew. We then saw Ollie and Andrew at the boat yard looking for Laura’s car. Andrew located her car key and drugged a bottle of water in her back pack. Ollie told Andrew that Laura’s car wasn’t there and Andrew persuaded him to go to Laura’s house.

As Andrew waited in his car, he spotted Laura going to get her things and she noticed that something seemed off. She took out the bottle of water and started to drink it. Andrew got out of the car and found her passed out on the floor. He dragged her and it was revealed she was faking it. She attacked him with a knife and the two had a brutal fight. Andrew chased her with the knife and dropped his car key.

The chase took them into the foggy marshes and Laura hid under a bridge in the water. Andrew ran over the bridge and shouted when he thought she’d got away. Returning to the bridge and shouting for Laura, he continued to search for her. As Laura tried to run away, Andrew found he and they fought once again. Laura fought him off and as she lashed out with the knife, she slashed his throat.

As Andrew staggered around, Laura just stood and watched until he fell into the water. Leaving him, she ran away.

Karen told Laura that Ollie had told her he found the car key and found evidence of a fight between Laura and Andrew. Ollie had planted the key at Laura’s house. Laura pointed out that Karen had no evidence against her and Karen told her she should have called the police after what happened on the marshes. Karen told Laura that murdering someone will stay with her and asked how she lived with the nightmares.

Laura highlighted how much damage and destruction Andrew had caused and we saw all of the people involved returning to their lives with Katy and Liam looking to have resolved their differences. Karen told Laura she would be stepping away from the case, leaving Laura speechless and alone on the beach.

That night Laura met with Ian (Kieran Bew) for a date. She got emotional as she tried to explain what she’d done but Ian suggested he already knew and told her he didn’t need to know. The two turned over a new leaf as they decided to restart their relationship.

Liar is available to watch now on the ITV Hub.

Advertisement. Scroll to continue reading.
In this article:ITV, Liar