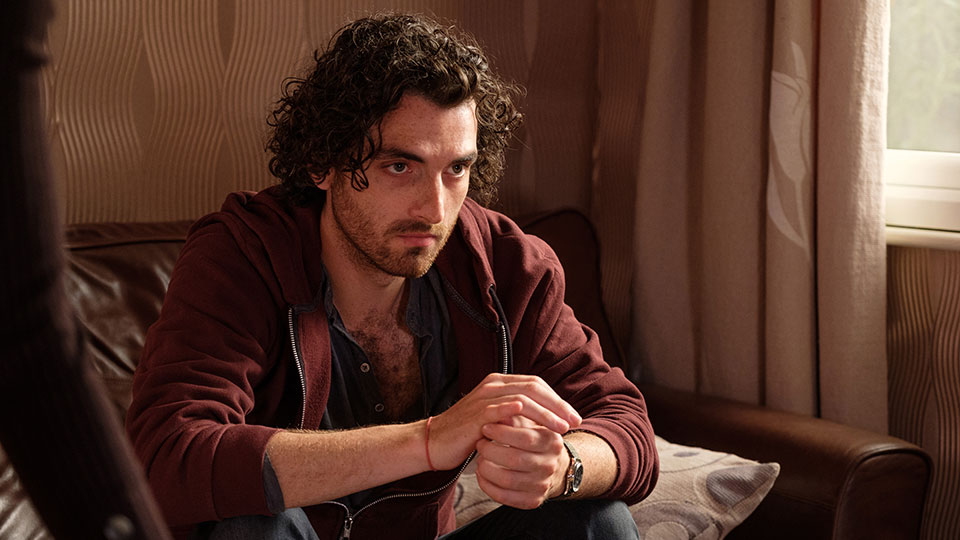 Maggie (Dawn French) tried to deal with her family having kept a secret from her on the latest episode of The Trouble With Maggie Cole.

Not much more was given away during the opening of tonight’s episode apart from the police pulling up outside Brian’s (Lee Boardman) pub.

The episode then jumped back to continue the story and Peter (Mark Heap) and Maggie had spent the night apart. Maggie slept on the sofa and told Peter she’d got up in the night and watched Jaws because she couldn’t sleep. Peter tried to talk to Maggie about the revelation that came out about Jamie (Phil Dunster) but Maggie was too upset.

Maggie told Peter he could take the car as she wasn’t going into work. She told him she needed time to process things.

Kelly (Kerry Howard) pulled in to the school and handed over her house keys to Roxy (Emily Reid), who had agreed to babysit her son. Roxy asked if it was OK that Alex (Arthur McBain) was planning to come over and Kelly reluctantly agreed.

Marcus (Patrick Robinson) dropped Jill (Julie Hesmondhalgh) off at school and when Roxy wished her a good morning, Jill told her to shut up and dashed off embarrassed.

Jamie and Becka (Gwyneth Keyworth) talked about why he never told her what he’d done. Becka was understanding and supportive, and she told him that she had no idea what his surname was for the first month they dated. Jamie then talked about how Maggie had never wanted him to box when he was younger and he was upset about the look he’d seen on her face.

Karen (Vicki Pepperdine) saw an opportunity to offer Peter a shoulder to cry on. She gently tiptoed around the issue surrounding Jamie but eventually asked Peter if it was true. Peter explained that the incident with Jamie was a punch that happened during training and put the other person in a coma, which he woke up from two weeks later. Peter insisted that it wasn’t Jamie’s fault and that the boy he hit had an undiagnosed blood clot.

As Karen played the caring friend, Maggie called and Peter answered the phone. Maggie told him that she was going away so she could have time to think. She said she was going to rent a room at the pub and apologise to Brian at the same time. Karen eavesdropped at the door but walked away when Peter got off the phone.

Maggie entered the pub with her things and spoke to Brian. Sydney (Hollie Edwin) appeared and Maggie asked her to give them a moment but she refused. As Maggie apologised, she asked Brian if what she’d said in the interview was true. That angered Sydney and she told Maggie a story about how Brian gave her a job when she was having trouble at home. As she continued sticking up for Brian, he slammed his hand on the bar and asked her to stop, before walking away. Before she left, Maggie asked if they had any vacancies and Sydney said they didn’t.

Alex visited his grandmother with his mother and they found her acting manic claiming that someone had taken her things from under the bed. We saw a flashback to Alex and Liam (Laurie Kynaston) clearing out their gran’s things and Alex found a suitcase full of money under her bed. In the present day, the grandmother continued to seem very confused as she mistook Alex for his father.

Sydney went up to Brian’s flat to check on him. He insisted he was fine but Sydney pressed to find out what was wrong. Sydney told Brian that Maggie was refusing to leave and no sooner had she said it than Maggie was working her way up to the flat. Maggie was intercepted by Sydney and the they sat in the storage room with Brian who told them he wasn’t part of the mafia. Brian then told Sydney that he’s not the person she thinks he is and revealed that he is actually in hiding.

Karen stuck her nose in with Jill who was reading comments online about Jamie. Jill insulted Karen’s hair clip to get rid of her and then chatted with Roxy who was prying about her romance with Marcus. Jill admitted she’d stayed over at Marcus’ and Roxy revealed that she was seeing Alex that evening before saying that she trusted him. Alex meanwhile got a call from the debt collectors and tried to hold them off before spotting them watching him.

Brian closed the pub and he, Sydney and Maggie had a drink while they continued to chat. He opened up about being in the army and he disclosed that was assigned to go to Afghanistan but ran away. Sydney asked what would happen if he was found and Brian said he would go to prison. Maggie reassured Brian that he wasn’t a coward and Sydney agreed. She then apologised to him and he accepted.

Karen found yet another reason to go to Peter’s office, this time asking him to sign reports. When Peter mentioned he was glad of the reports because he’d be home alone, Karen jumped at the chance to insert herself into the situation. Peter explained that Maggie was having a night away and Karen suggested they had dinner together. Karen’s insistence led to Peter agreeing.

As Maggie left the pub, Becka pulled up in her car. Becka told her that Jamie wasn’t OK and asked her to get in the car.

Karen fussed over her appearance ahead of getting fish and chips with Peter while Becka called Jamie and told him he was to stay at his dad’s tonight because Maggie was staying with her.

Roxy was at Kelly’s house babysitting when the doorbell rang. Alex turned up and tried to kiss her but Roxy changed the conversation to him ordering pizza for everyone. As Roxy looked for a menu, Alex had a nosy around the house and fixated on the framed lottery ticket. He tried to get one of Kelly’s kids to tell him where the money was but didn’t get anywhere.

At Jamie and Becka’s, Becka gave Maggie a big glass of red wine to help them get through the evening, while at the pub Sydney continued to talk to Brian about his past. When Brian mentioned that he’d kept his grandfather’s gun after he’d served in WWII, Sydney was relieved and hugged him.

Marcus and Jill were about to enjoy another date when Jill realised she’d left her keys in her coat at school.

At Kelly’s, Alex was getting twitchy as Roxy tried to find out why he’d ghosted her. He lied to her but when she pressed for more information he stopped speaking. Roxy then took him to task about how she needed him to help her through her bad week and then told him she thought him being in the house was a bad idea. Alex promised to tell her everything later. Alex then excused himself saying he needed the toilet.

Karen continued to execute her careful plan to seduce Peter and as they got their fish and chips out, she jumped on him and kissed him. Jill saw them, not realising that Peter wasn’t actively participating. Karen reminded Peter that he’d kissed her before at the Christmas party and she became manic. She then started attacking Maggie and Peter realised that Karen was the person who leaked the story about Jamie to the papers. Karen admitted it and claimed she’d done it for Peter. Peter told her to get out and Karen proved that she is actually a deluded crazy person.

Jill rushed out of the school and got into the car with Marcus. He asked if she was OK and she asked him to drive off.

Maggie drank most of a bottle of red wine while she watched Coronation Street with Becka. When the soap finished, Becka encouraged Maggie to talk about her feelings. Maggie admitted that she was jealous that Peter knew Jamie’s secret and she didn’t. Becka told her that she was human and pointed out that Maggie had the opportunity to be there for Jamie now. Maggie asked for a hug and Becka reluctantly agreed.

At Kelly’s, Alex was ransacking the house trying to find the money. Roxy found him the bedroom and he told her that they’d stolen his money. Alex became hysterical and told her that the money was supposed to be for his family and that he’d hidden it so it was taken away. Roxy grabbed hold of Kelly’s son and told Alex to leave but he refused.

Peter returned home and was surprised when Jamie turned up. Jamie explained that Maggie was staying at his so he was staying with his father.

Roxy called Kelly and told her that the money they’d found was Alex’s. Alex started shouting and Kelly told them they’d burned it. That information sent Alex running and he sped off in his car.

Read the full The Trouble With Maggie Cole episode 1 recap

Read the full The Trouble With Maggie Cole episode 2 recap

Read the full The Trouble With Maggie Cole episode 3 recap

Read the full The Trouble With Maggie Cole episode 4 recap

The Trouble With Maggie Cole concludes at 9pm Wednesday on ITV.

In this article:ITV, The Trouble With Maggie Cole