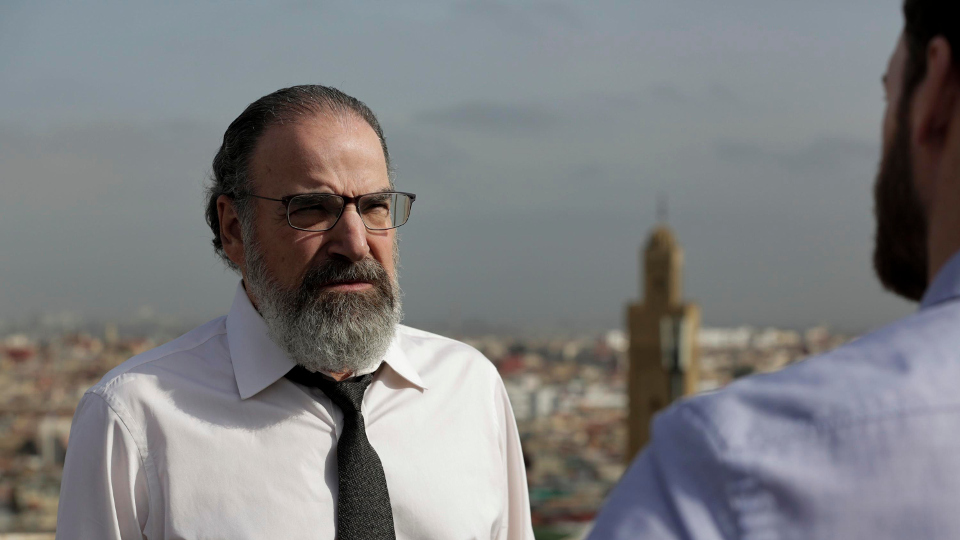 The sixth episode of Homeland season 8, saw Max (Maury Sterling) in a spot of trouble.

The episode opened up with Max having being taken prisoner by an armed man. He was still carrying his backpack with the helicopter black box. His captor spoke no English and cable-tied Max’s wrists while he had a toilet break. Max spotted a drone overhead and made a break for freedom but was shot in the shoulder and recaptured.

At the CIA station, Carrie (Claire Danes) spoke to Saul (Mandy Patinkin) to see if there was any updates on Max. He explained that search teams hadn’t found him at the crash sites. Carrie presumed that meant he was still alive and was upset that more wasn’t being done. She spoke to Lonnie (Austin Basis) who was monitoring communications to see if he had any updates.

Mike (Cliff Chamberlain) welcomed an FBI team who arrived to investigate events surrounding the death of President Warner. They were putting the station on lockdown while they carried out their investigation. Carrie saw what was happening and went straight out on her motorbike. A call came in to request that Saul visit G’ulom (Mohammad Bakri).

Carrie made her way through the streets while being careful to avoid the military who were rounding up Taliban. She arrived at a building and made her way to an apartment where Yevgeny (Ronin Costa) answered the door. She demanded a favour of help to find Max. Yevgeny said he would need a two minute window where the American monitoring was shut down. Carrie was torn but agreed to ensure it was offline at 3pm.

Saul and Scott Ryan (Tim Guinee) met with G’ulom who wanted the Americans to hand over Haqqani (Numan Acar). Saul explained that they didn’t have him. G’ulom wasn’t convinced and said Haqqani wasn’t responsible for the helicopters crashing. G’ulom threw them out when Saul wondered if G’ulom was responsible. Meanwhile, Haqqani was hiding out in the house of a civilian who was sympathetic to his cause. To try and force him out, G’ulom rounded up as many Taliban as he could and held them at the local football stadium.

At the White House, President Hayes (Sam Trammell) spoke to Saul about the situation with G’ulom. Saul explained that G’ulom was likely to slaughter the 300 Taliban that he was holding. Hayes asked if they could give up Haqqani. Saul requested that Hayes talk to G’ulom and tell him that killing the Taliban was a red line. Saul advised how to talk to G’ulom but Hayes let G’ulom dictate the situation.

Carrie returned to the CIA station and spoke to the FBI investigation team. They were keen to know about her role and what she knew about President Warner visiting. Carrie answered their questions and was surprised how brief the interview was and returned to her desk. Mike asked Jenna (Andrea Deck) to keep an eye on Carrie after seeing the recording of her conversation with Yevgeny. Carrie’s contact report of the meeting was completely different. Mike was suspicious of Carrie because it was her idea for President Warner to visit.

Carrie left her desk with Jenna giving chase. Carrie expected it and managed to shake her off her tail. Approaching 3pm, Carrie jammed up Lonnie’s printer to distract him while she knocked communications offline for Yevgeny to make his call.

Mike spoke to Saul and told him about Carrie’s conversation with Yevgeny. Saul confronted her and was unimpressed when she lied to him. He came clean about what he and the CIA knew and told Carrie that she would be sent back to rehab in Germany. Carrie protested at first but them seemed resigned to her fate.

Elsewhere in the episode, Max was drugged with morphine and held prisoner. His captor handcuffed him to a bed. He seemed to be holding him more to make money and took Max’s possession’s to be pawned – including the black box.

At the end of the episode, Carrie left for the airport with Jenna as her escort. As they left, Haqqani arrived to hand himself in, hoping to save the captured Taliban and that the Americans would keep him safe from G’ulom. At the airport, Jenna saw Carrie to her gate. It looked like Carrie would leave but once out of sight, instead of getting on the plane, she took an emergency exit and ran out onto the tarmac. A car came speeding up and Carrie got inside next to Yevgeny! Meanwhile, the black box was shown being transported to a new location.

Can’t wait for the next episode? Read our Homeland season 8 episode 7 preview.