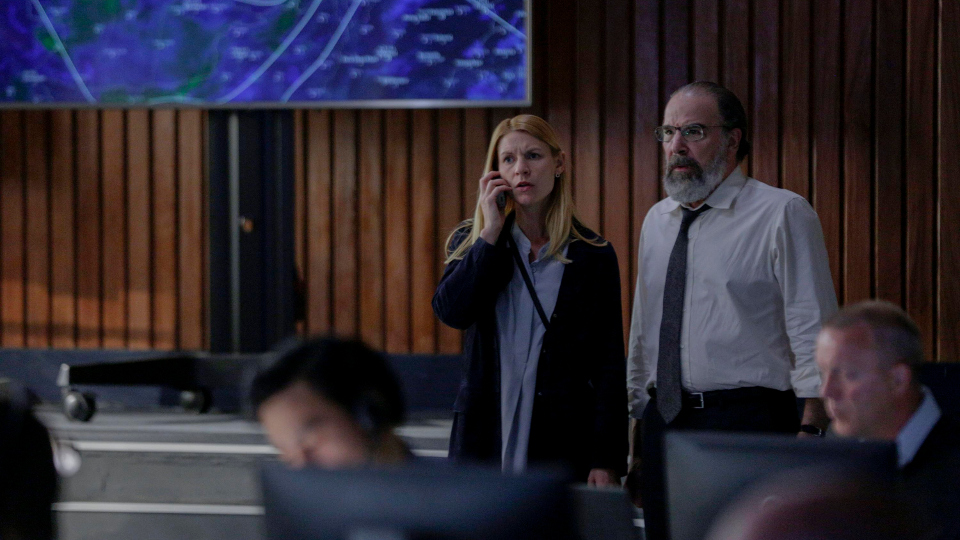 The episode opened up with Max (Maury Sterling) and the outpost soldiers scrambling to get to the helicopter crash sites. There was a Quick Reaction Force on the way too but they were at least an hour away. Back in the White House situation room, Vice President Ben Hayes (Sam Trammell), David Wellington (Linus Roache) and others watched things develop on a large screen.

Meanwhile, Saul (Mandy Patinkin) was panicking about who carried out the attack and if President Warner (Beau Bridges) or Daoud had survived. Saul also realised that it could have just been an accident so they needed to find out exactly what happened before reacting. For now the official story was that weather had delayed the arrival of the two Presidents. G’ulom (Mohammed Bakri) and Tasneem Qureshi (Nimrat Kaur) weren’t convinced that they were being told the truth. Plus there was a rumour that one of the helicopters had crashed.

Max and the team soon arrived at the crash site of Chalk One. The helicopter had broken up and everyone aboard was dead. Max realised that he was supposed to be on that helicopter. They continued on to the President’s helicopter. Chalk Two was mostly intact but a quick inspection revealed that all aboard had died. The news quickly reached the White House, leading to Hayes walking off to a room and asking not to be disturbed.

In the chaos, Saul did his best to keep things together. He informed G’ulom of the crash and asked that he work with the US on keeping the peace deal on track. Instead, G’ulom saw an opportunity to seize power and do things his way. He decided not to talk to the Americans, ordered that Haqqani (Numan Acar) be captured and warned Tasneem to flee as he couldn’t keep her safe.

Carrie asked what she could do to help and Saul sent her to Bagram airbase. She dug into the helicopter paperwork and discovered an inconsistency. The helicopters had been switched last minute and the mechanic in charge had left feeling sick. They checked his quarters and found he wasn’t there. Neither was his car, meaning he must have left the base. With the help of other staff they tracked him down in Kabul to a place the soldiers came at night to get laid. Everything seemed really suspicious until they found him with his pregnant Afghan girlfriend who was about to give birth.

Max worked the helicopter for evidence and began removing the President’s personal possessions. While he did so his squad stood guard and kept an eye out for Taliban. Contact was soon made and the soldiers had to fight for their lives while waiting for a decision on what to do. One of them took a bullet and died on the spot.

There were only three options – stand their ground, leave the site and re-take it later or bomb it. The decision needed to be authorised by Hayes who was now President. He didn’t know what to do and tried to push it back to the military. The problem was that leaving the site left the possibility that the Taliban would take the body of the President. Wellington pushed him and eventually suggested that bombing the site was the way to go. Hayes reluctantly gave the order.

As the air support moved to carry out their orders, Carrie had an idea. She called Max on his satellite phone and demanded that he recover the fight recorder so they would have proof of what happened. It was a big ask and most of Max’s team lost their lives trying to defend him. He eventually freed the flight recorder and fled with Soto (Sam Chance) as air support bombed the site.

Meanwhile, Saul decided to warn Haqqani what had happened. He suggested he flee and warned him that G’ulom was having all vehicles searched. Saul said Haqqani needed to find a way to stay alive. Soon after G’ulom made an national address and blamed everything on Haqqani. He ordered his military to take down the Taliban.

At the end of the episode, Max and Soto made it back to the first crash site. Max called Carrie to ask for help and Soto took a bullet and died. Max had no choice but to surrender.

Can’t wait for the next episode? Read our Homeland season 8 episode 6 preview.