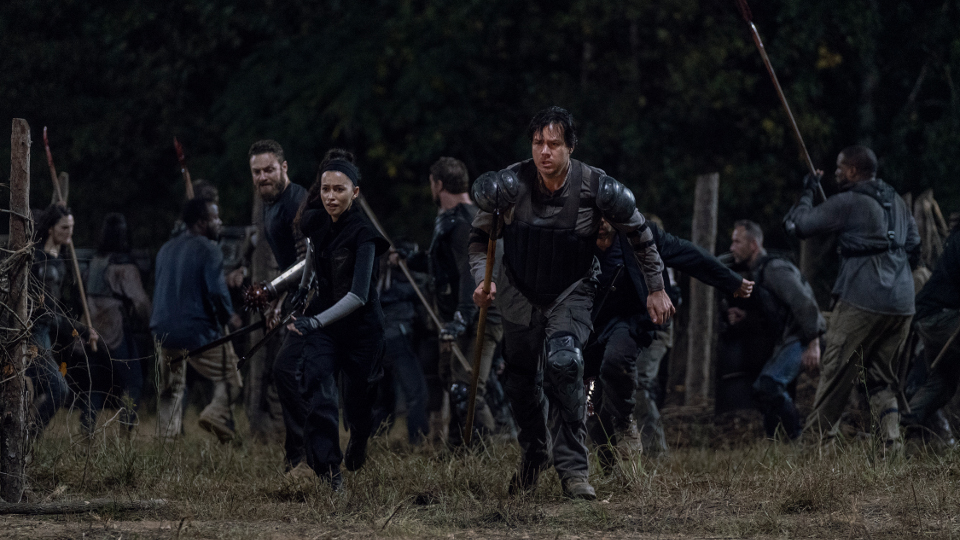 On the latest episode of The Walking Dead, the Whisperers came for Hilltop.

The episode opened up with Beta (Ryan Hurst) hacking away at a tree with a large knife. He was collecting tree resin to be used in the assault on Hilltop. Nearby, Alpha (Samantha Morton) had Negan (Jeffrey Dean Morgan) lash her arm before returning the favour. They then marched the horde towards Hilltop while whispering “We are the end of the world” and “We take them all”. Negan was also shown to now have his own creepy mask. He later suggested to Alpha that she try and get the community to surrender and join her.

At Hilltop, Eugene (Josh McDermitt) continued his secret radio communications with Stephanie (Margot Bingham). They realised they must be close to each other after discovering they both saw the satellite fall. Excited, Eugene blurted out they were in Virginia and proposed a meet. She agreed she would like to and said she would talk to her people but told him to keep it quiet.

Alden (Callan McAullife) and Earl (John Finn) spotted Aaron (Ross Marquand), Rosita (Christian Serratos), Judith (Cailey Fleming) and RJ (Antony Azor) approaching with a mystery person. It was Mary/Gamma (Thora Birch) and Earl wasn’t happy. He was even less happy when he discovered who she was and that she was the aunt of Adam, the baby they rescued from the Whisperers. Aaron explained she would like to see Adam but Earl refused.

Eugene kept his promise but Rosita walked in while he was taking a break and heard Stephanie on the radio. She tried to respond and Eugene came running and sent her away angrily. They later patched things up and she was sure he had feelings for Stephanie. She tested out her theory by offering to let him kiss her, something he’s been desperate to do. He tried but stopped himself, realising he now had feelings for Stephanie. Eugene went back and sang to Stephanie and she told him to meet her in Charleston, West Virginia in a week. He promised that he would be there.

Daryl (Norman Reedus) arrived with Lydia (Cassady McClincy) and announced that Alpha was coming. Hilltop held a meeting and they were split between staying to fight and running. They decided to evacuate and head to Oceanside but that plan was ruined when they found the surrounding roads had been blocked. Daryl was sure this meant that Negan had chosen to side with Alpha. With no way to escaped they decided to stay and fight and prepared for battle.

After hearing about what happened in the cave, Ezekiel (Khary Payton) tracked down Carol (Melissa McBride). She was at the camp in the forest where Daryl lived after Rick went missing. She returned to Hilltop with him and finally learned that he had cancer. She then slept with him. Carol then went around making up with everyone that she had wronged. This included Lydia and Daryl.

Eugene built an electric fence using wire and car batteries. The rest of the community built obstacles to try and slow the approach of the horde. Daryl made a pact with Ezekiel that if one of them fell the other would get the kids to safety. When a swarm of rats came running out of the trees they knew that the horde was closing in.

Judith told Daryl that she wanted to fight but he told her to stay with the other kids. He also told her that she might need to leave with Ezekiel if he came to get her. Judith gave Daryl a new jacket that featured a blue angel wing that she had made for him. Judith was seen on a walkie talkie calling for someone.

The survivors lined up as the horde approached, with Daryl taking the lead with a morning star weapon. The horde split so the survivors did the same. Eugene’s electric fence seemed to be doing the job and took out the first walkers but the sheer numbers overwhelmed it and it soon short circuited. The barriers slowed them down and the survivors began killing as many as they could.

The horde was too large though and the weight allowed them to collapse the barrier and simply push their way through. Behind the horde, Beta ordered the Whisperers to catapult the tree resin which covered everyone fighting. They then released flaming arrows and it ignited the resin which was flammable.

At the end of the episode, Negan told Alpha that he thought she wanted the community to join them. She replied that she did, but as new members of her horde. Negan said she was “badass” and then joined in firing a flaming arrow to make Hilltop burn. The survivors began to retreat but found themselves trapped.

Can’t wait for the next episode? Read our preview of The Walking Dead – 10×12 Walk With Us.