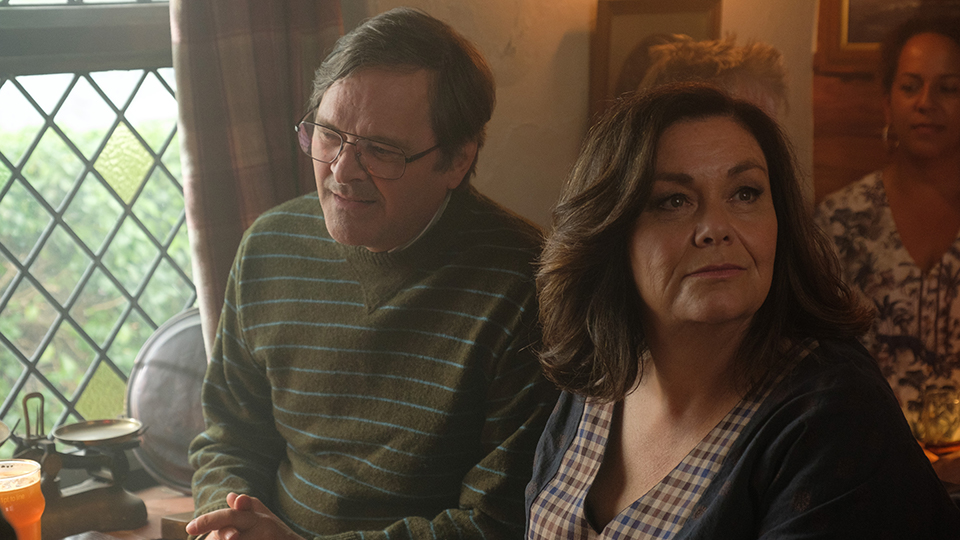 Maggie (Dawn French) tried to make amends but no one in the village was ready to listen on the latest episode of The Trouble With Maggie Cole.

The episode opened with another tease of someone being hit by a car. Looks like it happens during the town event and that it’s a kid that’s the victim.

Following the credits Maggie had Peter (Mark Heap) check outside their house before she left it. He suggested that she should take a day off but she was having none of it. Before she got in the car, Maggie saw Carol (Chetna Pandya) coming out of her house and considered going to speak to her. In a panic Maggie hit the car horn and then tried to drive away without drawing any more attention to herself.

At the school Jill (Julie Hesmondhalgh) asked Roxy (Emily Reid) for a quick word and Karen (Vicki Pepperdine) reacted shocked to a text she received. Brian was encouraged to sue Maggie by Sydney (Hollie Edwin) but he wasn’t interested and wanted the situation to blow over. Sydney then got a text and looked shocked but when Brian asked if she was OK, she lied to him.

More people around the village received text messages and everyone looked a bit nervous. Maggie was surprised to see her son Jamie (Phil Dunster) arrive with Becka (Gwyneth Keyworth) asking if they could have a chat.

Carol saw a patient whose mother alerted her to an article written about Maggie’s disastrous radio interview. Jamie and Becka showed Maggie that the interview had gone viral. Maggie was shocked at the mean things people were saying and she was interrupted by a phone call from Peter.

Back home Maggie was looking out the window when she saw Carol coming home. She chased after her and apologised for what she said. Maggie begged Carol to listen to her but her pleas fell on deaf ears while Peter looked on helplessly from the house.

Jill went to the local shop where she asked Emil (Tomi May) if he and Roxy were OK. Emil said they weren’t and as Jill’s shopping was scanned through, she picked up one of Marcus’ (Patrick Robinson) book. Neil (Joe Layton) returned home and was asked by his son if they were millionaires. Going upstairs, Neil chatted to Kelly (Kerry Howard) who complained that he’d been too flashy with their secret money. The couple had a difference of opinion of where the money came from with Kelly saying they’d stolen it and Neil suggesting they took advantage of a situation. Neil then said they should go along with the story that they won the lottery.

Carol’s husband Alan (Jason Bailey) came home and told her that he’d ended his affair. The two embraced and then the action cut to the beach where Maggie was talking to Peter about how she could rectify the situation. Peter told her to give people time before she tried to make amends.

The next morning the local paper came and Maggie’s radio interview was all over the cover. Becka warned Jamie that he might want to take a day off work and showed him the newspaper. Maggie furiously read the article and opened up the paper to see a photo of herself dressed up as a witch. Jamie called to see how Maggie was coping and while Peter was on the phone to him she gave him the car keys and announced she was going to see Carol.

Liam (Laurie Kynaston) and Sydney kissed in the car and he told her to ask Brian about something now it was out in the open. Maggie meanwhile booked herself an appointment for trenchfoot with Carol, who was furious to see her in the waiting room at the surgery.

Jill arrived at work and was talked at by Karen about people moaning about Peter being headmaster given what Maggie had done. Jill carried on to Peter’s office and told him that Roxy was going home because she wasn’t feeling well. Karen asked about Roxy and Jill served up some serious sass when she realised her conversation had been listened in to.

Alex (Arthur McBain) spoke to his mum about Maggie’s revelations and he tried to play them down. He then argued with Liam and his mother asked if he regretted coming back to the village. Alex assured her that he had no regrets.

Jill tried to reassure Roxy that everything would blow over and told her to ignore the rumours and gossip. Once Roxy got out the car, Jill spotted Marcus and introduced herself as ‘one of the outed six’ from the newspaper. He hadn’t seen the newspaper but realised why he’d been getting funny looks from people. Before he left, Jill asked Marcus if he would talk to the kids at school about writing and he agreed.

Maggie went through with her fake appointment with Carol and got her opportunity to explain herself. She said she wanted to make it right and fix any issues Carol had with her husband. Carol became snarky and told Maggie that she’d put her photo of Alan away because people kept commenting.

Brian said goodbye to Sydney on his way out of the pub and wouldn’t be back until later. Before he got out the door, Sydney told him that no one believe what Maggie had said about him.

Peter and Jill had an awkward meeting in the corridor at school. He asked how she and Roxy were, and Jill told him it wasn’t his fault. Peter told Jill he didn’t blame her for not replying to Maggie and emphasised that their rift was breaking her heart. Jill walked off without saying anything.

At Carol’s office, Carol told Maggie that she was actually Alan’s other woman and the man he’d been seen with was actually his son. Carol was furious that Alan had broken up with his wife and chosen her, which is not what she’d wanted to happen. Maggie promised not to tell anyone what she’d learned and Carol told her their time was up.

Carol paid a visit to Alan’s wife and son while Maggie evaded Jamie and Becka’s questions about how things went with Carol. The doorbell rang and it was Jill who said Maggie had come out of the situation worse than the rest of them. She then asked Maggie for her notebook for the community event and told her there’s no way she could run it after what she’d done.

Once Jill left, Maggie exploded and said she was sick of the situation. She insisted that the family went to the pub and faced everybody. Carol told Alan that she’d come clean to his wife and insisted that he went back to her, which is the situation they’d agreed to. Alan then left with his bags.

Maggie and her family arrived at the pub and everyone went silent. They found an empty table and Peter had a testy exchange with Liam. Karen walked into the pub and was delighted to see Peter until she realised Maggie was with him.

Neil and Kelly framed a fake lottery ticket as proof that they had indeed won the lottery as Maggie had announced on the radio.

Carol spoke to Maggie in the pub and told her that Alan had left her. She had a go at her for talking about her private life but shook her hand and thanked her for enabling her to find out the truth. Carol’s not-quite-true performance made the people in the pub stop staring at Maggie.

Liam took himself upstairs to Brian’s flat and searched through his stuff. He found a box with a gun in it in a cupboard.

Maggie and Peter returned home and she sighed as she caught the sight of the newspaper again. Peter told Maggie that Jill would be the hardest one to win over.

Advertisement. Scroll to continue reading.
In this article:Dawn French, ITV, The Trouble With Maggie Cole