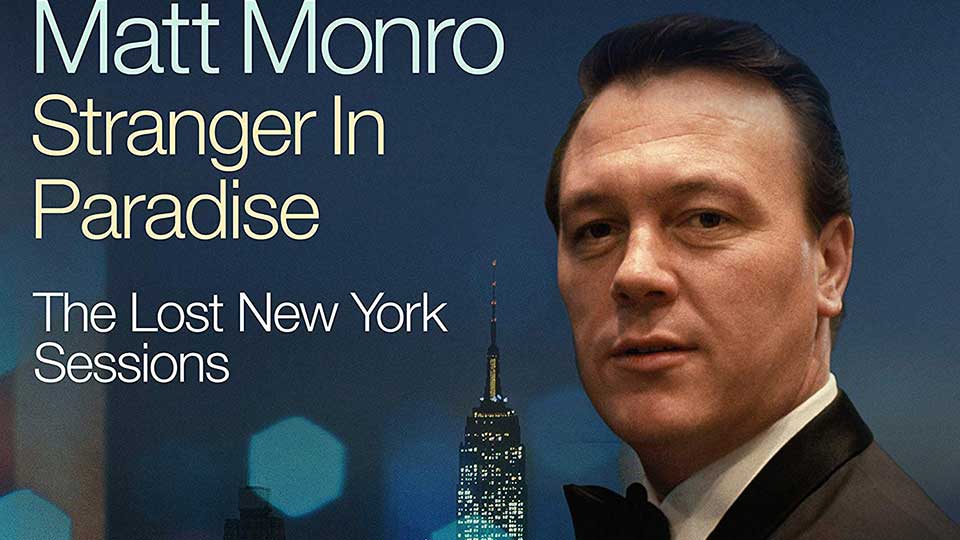 This mammoth two-disc, 47-track release brings together ‘The Lost New York Sessions’ for disc one and a compilation of Matt Monro’s best-loved hits for disc two.

In the decades since his untimely death in 1985, affection for Matt Monro – an English singer who ranked alongside Frank Sinatra and many other greats – has endured, and his extraordinary musical legacy continues to give pleasure to fans young and old, from every generation.

The personality behind the voice appeals to our British sensibilities, too. Matt Monro was born Terence Parsons in Shoreditch, and rose from driving buses to becoming an international megastar, holding his own against the greatest recording artists who ever lived. His humble origins and share of personal problems gave him a touch of vulnerability, and his music was never less than relatable, resonating with audiences worldwide, as if he was singing just for them.

Monro may be best-remembered now for his collaborations with enduring popular culture. He was the first recording artist to provide a James Bond theme song (think of the fanfare attached to the unveiling of the latest one these days as each movie rolls by), recording From Russia With Love to accompany Sean Connery’s second outing as the super spy. It is included on this release, along with On Days Like These, the iconic song that opens The Italian Job, as a red sports car is driven along the winding roads of the Italian countryside. Perhaps you remember the film Born Free, and the song that accompanied it? My family always connected its sentiment to a plucky whippet cross we adopted, who grabbed the chance of family life with all four paws – Born Free was that beautiful girl’s anthem – and the song still makes me shed happy tears remembering her antics.

There truly is a song on this release for every occasion. Listening to it now, I have been blown away, not just by the variety on offer, but with the brilliance and technical mastery which Monro brought to every song he recorded.

The first disc brings together tracks Monro recorded in America in the mid-1960s, and many are hits from Broadway shows that were current at the time. As the CD inlay notes explain, the sessions were recorded in a remarkably short space of time, and with only five musicians. A ‘fuller’ sound, which you hear on the CD, was the result of strings and brass added in post-production, an approach Monro was not entirely enamoured with.

Disc one starts with the showstopper The Impossible Dream, one of the most recorded songs in history, but Monro’s take is up there with the greatest. I also love the Latin beat of The Apple Tree, and its stark contrast to the melancholy If She Walked Into My Life which immediately follows it. Sunrise, Sunset (from Fiddler on the Roof) is a gorgeous song about the passage of time from a parent’s perspective. Monro imbues it with the necessary nostalgic autumnal colours. Beautiful Beautiful World, previously unreleased, is the first and only take of Monro’s recording of the hit from the musical The Apple Tree! The last few tracks are alternate takes of songs already featured, including the occasional throat clearing prior to the band springing into action for added authenticity.

Overall, I prefer disc two, which brings together Monro’s amazing and substantial collection of best-loved popular songs. It’s all a matter of taste. Those who adore old school musicals will be in heaven with the first disc. But nostalgia plays a huge part in this, and the glorious songs I remember from my childhood in the 1980s are the ones spaced across 27 tracks on disc two. Portrait of My Love is a timeless classic, which Monro’s sumptuous tones deceptively effortlessly carry. But the way in which Gonna Build a Mountain reaches a climax is where this side takes you to exhilarating heights. Everything from Monro’s vocals to the punchy brass and swing-style percussion combine to make for listening perfection. It’s the kind of song that makes you want to join in, and wish you’d been blessed with the vocal talents of Monro.

There are too many high points on the album to name them all. On a Clear Day You Can See Forever is another that is sure to get your foot tapping, or asking the nearest available person to dance. Spanish Eyes, as you might expect, brings in a flamenco style. For those who love high drama, you simply cannot beat The Music Played – the greatest break-up song ever recorded, double-billed with the stirring All of a Sudden. Everybody’s Talkin’ is another popular standard that Monro makes his own. We’re Gonna Change the World is an infectiously upbeat hit with impossible to remember lyrics, but save it for the chorus! There’s even a cheeky cover version of The Beatles’ Yesterday!

Stranger in Paradise is certainly value for money. The first disc runs for almost an hour, and the second reaches nearly eighty minutes.

I am profoundly grateful to Stranger in Paradise for reconnecting me to an artist who featured heavily during my formative years. These songs still retain their power and resonance. With keener critical ears, there’s no mistaking the brilliance of Monro’s technique, nor the enduring appeal of the many timeless classic songs brought together for this release. The rarer recordings and alternative takes are sure to appeal to Monro aficionados. For more casual fans, this is hart to beat as a compilation tribute to a legendary singer.

In this article:Matt Monro, Stranger in Paradise, UMC